As the Guardian has noted:

Consumer confidence in the UK has fallen to the lowest level since records began in 1974 amid growing concern over the cost of living crisis.

Stoking fears that Britain is heading for a recession caused by the squeeze on family budgets, the latest monthly snapshot showed consumers are now gloomier about their prospects than they were during the 2008 financial crisis. 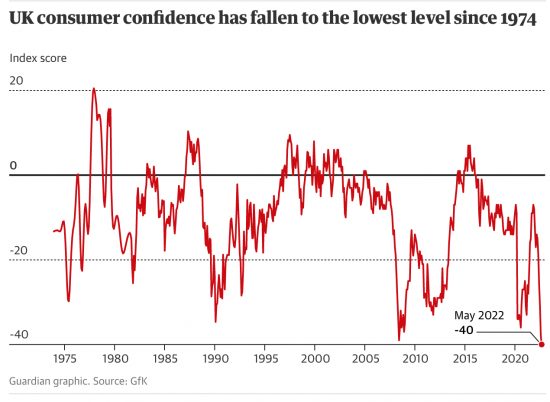 What can usefully be said that has not been by Danny Blanchflower and myself already? I think three things.
First, we were relight to have already called the recession based on this evidence of collapsing consumer confidence. As the Bank of England note in their new book on economics, mainstream economists have failed to call 148 of the last 153 recessions. I am happy not to be in the mainstream on this issue. We have already got this right, and it really wasn’t hard to do. You just had to talk to people to know what was coming our way.
Second, if we are already in recession, as I am certain is the case, then it is too late to take action to prevent it. Instead, as I have noted elsewhere today, the required action is on how to limit the impact of this crisis on people’s lives. As I said in a radio interview yesterday, the job now is:

When at this moment none of those things can be taken for granted, and the government is doing nothing to help, this is a massive challenge which I fear the government will fail. The human cost of that will be high, and I will regret and mourn all the suffering that will occur because all of this is avoidable.

Third, whatever the political significance of Partygate, and it is huge because of the rapidly creeping corruption of fascism that it makes clear exists in this country, this issue is bigger. But, and that is a massive but, if I am right in saying so then it requires the main opposition parties to stop aligning with the bankrupt thinking of the Bank of England and to instead have the courage to go their own way. Direct intervention to help people, requiring government spending of £50 billion or maybe more, is required now.

That funding is readily available, whether through new money creation or by increasing the size of government deposit taking if the funds are to be used for investment purposes (and some should be). Public sector debt paranoia at this moment in time is no excuse for the government imposing private poverty on the UK’s population.

I suggested a programme of action in The Mirror yesterday. I could most certainly expand it. I have no doubt the Treasury and others read what I wrote. The silence from policy makers in response was deafening. And that genuinely worries me. Are we really to consign people to misery because of the poverty of economic thinking?
Donate
20