One of the arguments that Danny Blanchflower and I are making in our two person opposition to the prevailing establishment thinking on inflation is that the inflation we are now suffering will go away.

We don’t say that this is because of anything the Bank of England, the Fed or European Central Bank might do, most especially when they are getting almost everything wrong right now. We say it simply because it always does. That is an argument that, unlike the irrational claim of central bankers that increasing the price of money stops other inflationary pressures, is backed by data. The data in question comes from the Bank of England but is best presented by the St Louis Federal Reserve Bank, who have a great website when it comes to data. As they display it, this is the inflation data for England and then the UK from 1210 onwards: 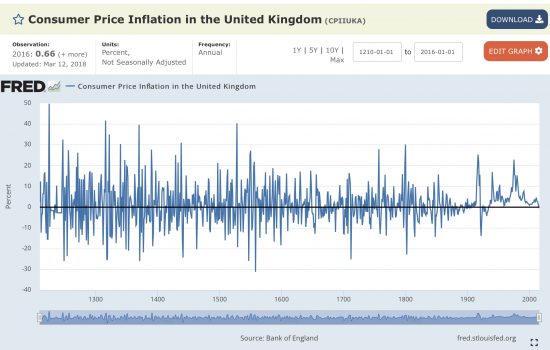 Note three things. The first is that the trend in the peaks is steadily downwards.

The second is that deflation has not happened for a century.

The third is that every peak is followed by a fairly rapid downturn.

For those cynical about data from 1210 (and I am no more so than I am about that from last week in a great many cases) I have cut the period covered by the data in this second chart: 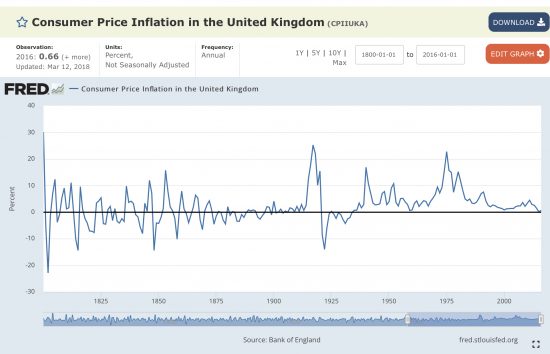 What is very apparent is how wavelike the pattern of inflation followed by deflation is until the last century.

And just in case anyone still doubts the data, this is the data from 1945: 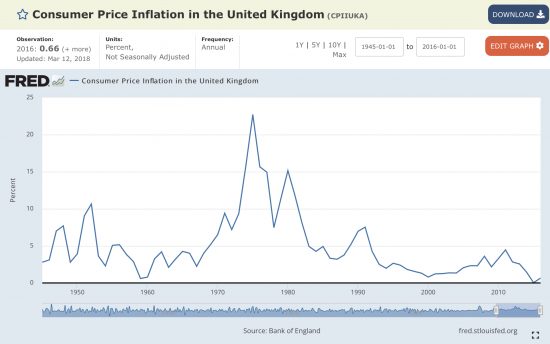 The relevance of this last one is to show that inflation peaks are usually pronounced, and rarely result in plateaus. Even if they do, those plateaus are of short duration after which the trend is that there is an almost invariable sharp decline.

Politicians can make things worse, of course: Thatcher did in the early 80s, which most people tend to forget, but there are always consequences for deliberately trashing an economy, as she did. These exceptions apart, it is clear that inflation has not only recently, but throughout 800 or more years of history had a habit of correcting itself.

There are three reasons for pointing this out. The first is to suggest that talk of stagflation is just nonsense. That is especially the case when pay rises are way below inflation, and we’re facing a cost of living crisis because of a shortage of income right now and not demand-pull inflation because of excess wage rises at present.

Second, if inflation reverses without assistance much of the supposed role of supposedly independent central banks disappears.

Third, the focus of policy during periods of inflation should not then be on tackling the inflation. That will sort itself out simply because the panic buying, or market failings that give rise to it, will always be resolved by the the creation of a ‘new normal’ in which sanity is restored.

Fourth, instead the focus of policy during a period of inflation should be to:

a) make sure people survive it i.e. to protect the vulnerable who might otherwise suffer as a result of their loss of purchasing power (which should be the priority now);

b) to prevent the risk of recession because of the loss of that purchasing power creating short term liquidity issues for businesses that cannot see a way through to the other side of the inflationary period as a result, with a resulting loss of wellbeing for all involved. This is especially important right now because unless it happens the current pressure on spending p0wer is going to spillover very quickly into serious unemployment;

c) to address the systemic issues giving rise to the political, economic or social failure that resulted in the inflation. So, in our case:

What would you not do? Increase interest rates, for a start, threatening mass homelessness when people cannot afford rents or mortgages out of already crushed incomes, and which force businesses into unmanageable debt, and which force developing countries who borrow in dollars into insolvency, whilst benefiting the financial establishment.

What else would you not do? You’d not sit back and do nothing to reduce the inflation peaks when they can be capped by judicious tax cuts to VAT and duties, which makes any downside of this crisis much easier to manage.

And what you would do is provide very specific support to the most vulnerable (people on benefits, pensions and low pay) whilst taking purchasing power away from those on high incomes and earnings who represent the one part of the economy where demand-pull conditions might exist.

This is a theory of how to manage the situation we are now in based on analysis, not economic voodoo. I fear that no one will listen until the damage has been done, but Danny and I will persist in making our case.