The FT has noted that:

The acting premier of the British Virgin Islands, Natalio Wheatley, has rejected as “unacceptable” the reimposition of direct rule from London, setting up a confrontation with the UK over the central recommendation of an official inquiry into corruption and maladministration in the Caribbean tax haven.

He is wrong. And the fact that he does not recognise that the BVI is so systemically corrupt shows that, because that is what it is. That he comes from an old political family within the islands, also suggesting that he is part of the architecture that created this systemic problem is also indicative of why he is wrong and change must be imposed. It is apparent that the required changes cannot come from within the BVI now.

Let me offer some theory to support this argument. In 2009 I wrote a paper for the Tax Justice Network that has had some significance since then, not least in still shaping most of the work of the tax justice movement in putting a focus on secrecy, as it has also done for most regulators. The preamble to the paper noted: 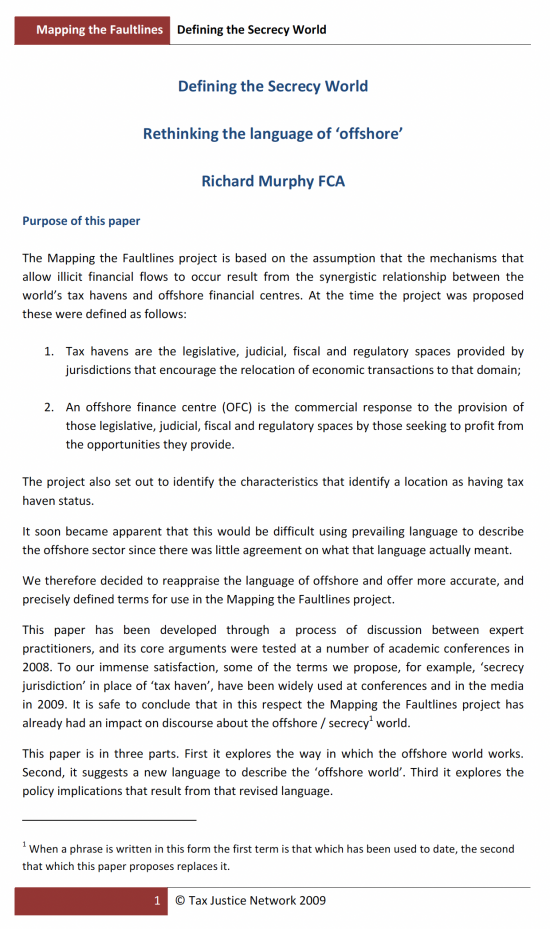 The summary was quite short: 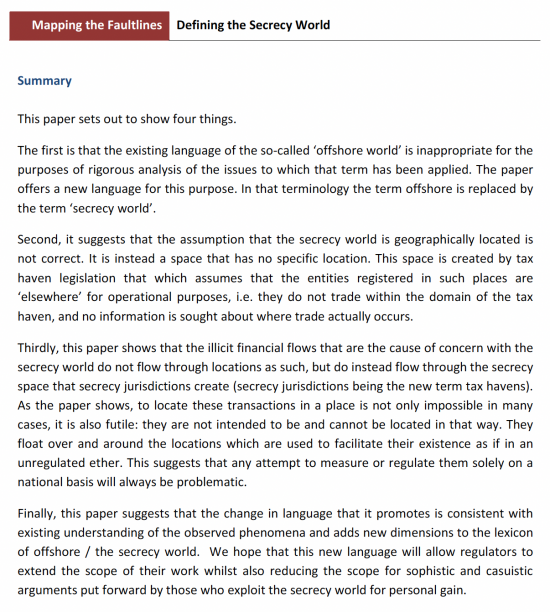 What the paper did was develop a schematic summary of the new language that I proposed to explain the offshore world, which when fully developed looked like this: 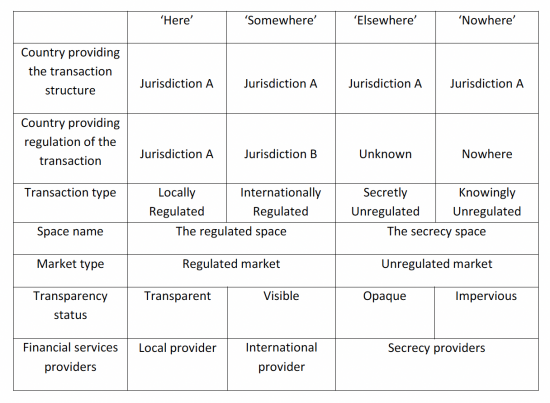 An example demonstrated the idea in this way, showing how abuse existed in a secrecy space resulting from the interaction of many secrecy providers operating from secrecy jurisdictions: 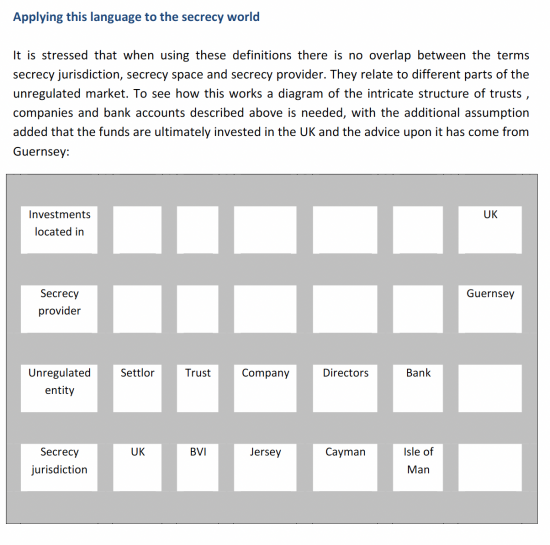 What I suggested was that there was a systemic, deliberately created, interlocking network of secrecy jurisdictions and secrecy providers (banks, lawyers and accountants) who created a secrecy space in which abuse could take place beyond regulation. The book that I co-authored that resulted from this work is still one of the most cited in academic offshore literature.

The BVI is an enormous player in the creation of this secrecy space. It hosts 370,000 companies of which almost nothing is known. That is by continuing choice. The result is massive opacity in the world that undermines fair competition and effective markets and simultaneously permits corruption. I stress, this is deliberate.

The UK has the right to intervene for this reason. It is responsible for the maintenance of good governance, law and order and stable international relations in the islands. Law and order has obviously failed: the premier and a senior official are under arrest in the USA. Good governance has failed, as indicated by the choice to supply corruption services. And this is a foreign affairs issue. The companies the BVI creates are deliberately intended to undermine the law, order and tax systems of other states.

The BVI remains a key component in the creation of the secrecy space. It has to be taken out of action. But I stress, direct rule without ending this secrecy would make the UK responsible for it. And that would be intolerable, so direct rule c9mes with conditions, which is that BVI secrecy  goes.

What does that mean? Full beneficial ownership of all companies on public record plus full accounts on that same record. That’s the minimum demand for the BVI.

The UK must take control of the BVI now. It has a constitutional duty to do so. But if it does it cannot duck its own duty to end BVI secrecy. We will be watching.