The government can create all the money that we need to prevent poverty, misery, despair and recession in this country, but is choosing not to do so. Why?

It would cost around £50 billion to save people from the hunger, the cold, the poverty and the despair they are now facing. That money is available tonight. It would take a few keystrokes on a Bank of England keyboard to create it, instantly. So why won’t the government do it?

I followed it with a quick thread as an afterthought, the tweet having originally been intended to stand alone.

This morning the idea still seems as relevant as it did last night, so I am returning to it as an alternative to the horrors of war in Ukraine, about which I can do nothing, because on this issue there are solutions I can propose.

As I showed in a Twitter thread recently, the impact of energy price inflation (driven almost entirely by financial speculation, or exploitation) is going to be extremely harsh. When domestic fuel, road fuel and other inflation are taken into account and having allowed for pay or benefit rises a household on around the minimum wage will see a cost of living increase of maybe £3,000 a year in my estimation, or around 14% of likely available income.

For a household on median pay, the cost of living increase will be more, because they are more likely to have a car and bigger energy bills. The cost will exceed £3,000. In proportion to available after-tax income, it may be 11%.

For those in the top decile the increase in costs is bigger in absolute terms again, but much smaller relatively, and there is more than enough slack to cover that cost, albeit not without it being noticed.

At least half of UK households are then facing increases in costs of maybe £3,000 a year by October this year, and have literally no way in most cases of meeting these bills given that neither pay nor benefits are increasing, these households have no savings of any consequence on average, and in saying this I am assuming that all spending on anything but core essentials is already eliminated.

Roughly 15 million households need £3,000 a year to survive this crisis in that case. That's £50 billion, near enough. I do not pretend that my estimate is more precise than that. But for the sake of illustration, it does not need to be: as an illustration of scale that is good enough.

What I know is that this money is available. With a few taps on a keyboard the Bank of England can create this money. It can either give it directly to the government by letting it run a deficit in the Ways and Means Account, which is entirely possible, or there could be a further quantitative easing operation. Because of the distributional impacts, I prefer the former and not the latter, but if there was a wealth tax at the same time, quantitative easing would work. The essential point is that there is no scarcity of money in the UK to tackle this issue, which is being entirely created by a shortage of money and quite literally nothing else.

In other words, solving this problem of poverty is at this moment that is entirely within the ability of this government to solve. There need be no poverty crisis in the UK. Using the power of the government to create money this problem can be solved.

And what we know is that money creation from 2009 to 2021 did not deliver inflation. Inflation has been created by Brexit, the failure to plan the reopening from Covid lockdowns, war and financial market exploitation. But it has not been caused by money creation. This is the latest Office for Budget Responsibility inflation forecast: 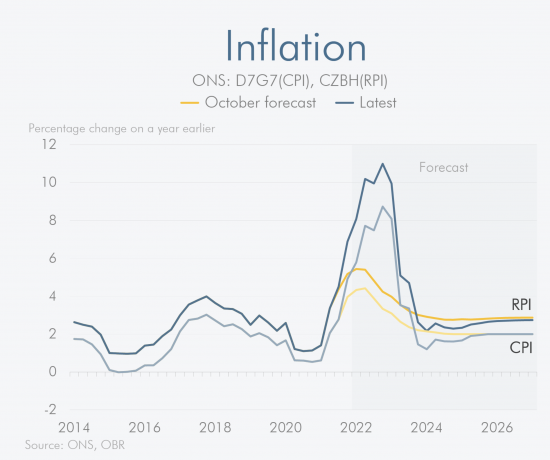 If money creation was going to create inflation it would have happened a long time before 2021: it did not.

So, money creation now will not create or add to inflation risk.

But what it will do is save the economy from recession. Given that many if not most households in the UK will not be able to meet their energy costs soon, or will only do so by cutting out all their discretionary spending,  there is a massive economic recession coming our way in the UK unless something is done to help these families now. The leisure sector will be hammered. Unemployment will rise. Banks will suffer massive bad debts as mortgages and commercial loans fail. It is all too easy to see how this could escalate. Multipliers work for an economy going down as well as for an economy going up.

£50 billion to support households now would end this fear of poverty.

It would help curtail inflation.

It would keep people in jobs.

It would prevent a recession.

It would also prevent a collapse in government income.

And it could prevent a recession.

And all that could be achieved by simply creating the money required to support struggling households.

So why aren't we going to do just that? What is it that is stopping the government taking people out of misery, despair, poverty, hunger and cold?

Why is it that the government wants to fuel anxiety, depression and the real risk of resulting physical as well as mental illness that this will lead to?

What appeals to them about creating a recession?

Why is that they want to fail us?

And all for the sake of putting some keystrokes into a keyboard?

I really wish I knew, because to me it is incomprehensible that they are acting as they are.

As much as it is incomprehensible that the Opposition is not arguing for my alternative.

When will we have politicians who understand money and its power to change the world that they alone can use?