Why the rich got richer – an inadequate explanation from the BBC

I watched this programme on BBC2 last night: 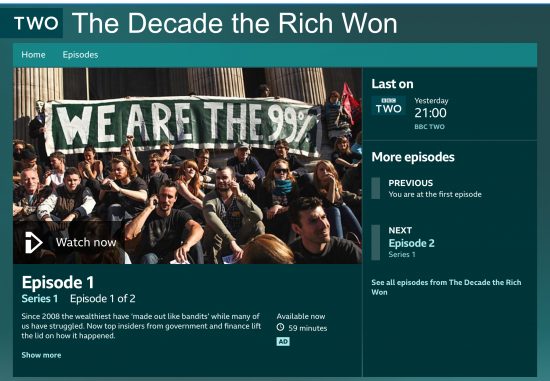 For those with an hour to spare and the ability to withstand the frustration of watching it I can recommend doing so.

You will witness Cameron, Osborne and Clegg explaining why they put in place a form of quantitative easing (QE) that they knew would increase the wealth of the already wealthy, and were happy about that. Osborne was blatant. Cameron was not interviewed. And Clegg hangs his head in despair, saying what else could they have done?

I do not blame those who were interviewed. I know how these programs are edited.They might well have told the person interviewing them precisely what the alternatives to the form of QE used might have like.

Jeremy Corbyn, who was interviewed, could, for example have explained what People’s QE was, in detail, and it did not make it to the programme.

Others, like John McDonell, might have suggested that the programme of austerity was never needed. He could that was because the consequence was absolutely foreseeable in sluggish growth, greater inequality, rising poverty as indicated by the use of the food banks, and so on. If he did it did not really get in.

It was, however, rather bizarrely, left to Iain Duncan Smith to say that the Tories went too far with their cuts, and he had to resign in protest. In fairness, he was also the person who said that the Liberal Democrats constrained the Tories until 2015, and without them policy got worse.

This was, however, one of the few redeeming features of the programme. The tax justice movement was looked at, but the solutions it offered were not really explained, particularly domestically where, then as now, reform within the UK was more important than tackling tax havens. And, the fact that the impact of QE could have been compensated for by increasing taxes in wealth, better tax collection in the UK, and positive programs of redistribution rather than austerity was simply not mentioned.

The programme set out to say that the rich got richer, and it succeeded in making clear that this was the objective of the Bank of England and the 2010 government, but beyond that little was added to understanding. Call it an opportunity lost, if you like. I will still, however, watch the second programme when it comes out even if I have a little expectation that it will really seek to answer the question that the program should have addressed, which is why this was allowed to happen.