We have a supposedly wealthy world that looks to be fundamentally feudal that has been created by financial engineering and tax incentives. So now we need to change the rules.

The McKinsey Global Institute has produced a new report on wealth. I have not read all the detail as yet - but strongly suspect I will be.  Instead, I highlight the headlines because I am not sure that the authors are not as shocked by them as I am.

Net worth has tripled since 2000, but the increase mainly reflects valuation gains in real assets, especially real estate, rather than investment in productive assets that drive our economies.

Take too this summary of their takeaways from the work:

This chart is, for me, the most telling of those I have looked at, so far: 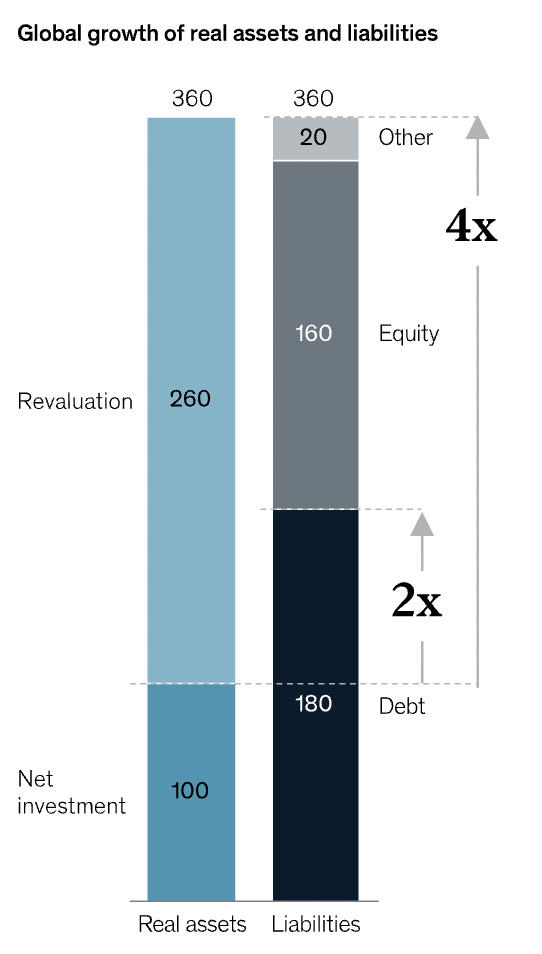 The message is simple. It is that we live in a world where supposed wealth does not come from value creation any more. It does, instead come from financial engineering. Revaluing existing assets - aided enormously by the introduction of International Financial Reporting Standards in 2005 - has permitted a boom in the notional value of wealth from which only those who already owned that wealth and those who advised them have really benefitted. In particular, the increase in debt that does nothing more than pay returns to existing asset holders has been staggering.

This is unsurprising when what makes up wealth is considered: 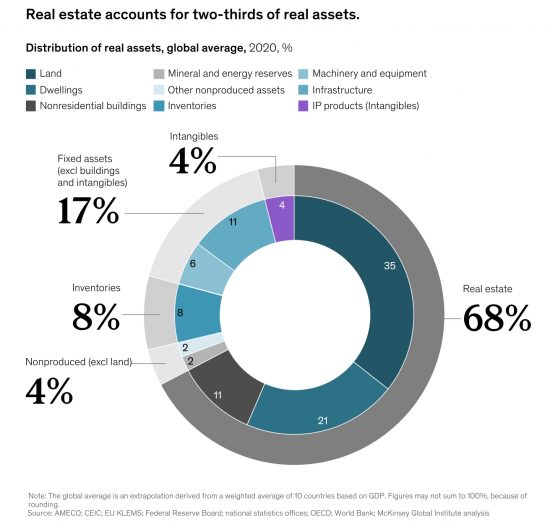 It is as if feudalism had not ended: this is a world where land backs wealth. And older generations are using that as the opportunity to leverage returns, whether from sale prices or rents, from younger generations. The evidence is that they still have ample opportunities to exploit, except for one thing.

The question as to how much debt can be created  has to be asked. This is also from the report:

From 2000 to 2020, financial assets such as equities, bonds, and derivatives grew from 8.5 to 12 times GDP. As asset prices rose, almost $2 in debt and about $4 in total liabilities including debt was created for every $1 in net new investment.

The country variations were wide, with the amount of debt created for each $1 in net new investment ranging from just over $1 in China to nearly $5 in the United Kingdom.

Leverage has gone through the roof, especially in the UK.

What to say to add to McKinsey’s:

Several scenarios are possible, with an imperative to deploy wealth more productively for critical investment needs?

First, we need to appreciate this.

Second, the case for wealth taxation is overwhelming.

Fourth, in the face of this the need for social investment is high.

Fifth, instability is built into this.

Sixth, in a world of so much need the distortion of values that the global banking boom launched by Thatcher and Reagan is horribly apparent.

Seventh, subsidies for most savings are no longer needed: we very clearly have far too many conventional savings.

Eighth, if tax and subsidised savings built this edifice so too can it build something better.

The last is my focus. Thus report makes for grim, and deeply worrying reading given the obvious instability and inappropriate focus within financing that it reveals. And yet it shows incentives work. So, we need to change the incentives.