Why GERS is wrong – yet again

The Government Expenditure and Revenue Scotland statement for 2021 is out. I suspect that it is no surprise to anyone that the tale is of gloom and woe for Scotland. This chart summarises the headline:

The claim will be that Scotland has done much worse than the rest of the UK. This chart supports that claim:

The gap between the Scottish position and the UK position has been running at around 7%. Now it is over 10%. So relatively it will be claimed Scotland has done much worse than the rest of the UK in the current crisis.

But is that true? Revenues as a proportion of those of the UK have been remarkably consistent:

The proportion of revenue raised in Scotland is almost constant.  So the claim has to be on the spending side:

That is interesting. Because what I have spotted is something that supports my hypothesis that all this is manipulated by GDP being wrong. This is my modification of a table in the GERS document: 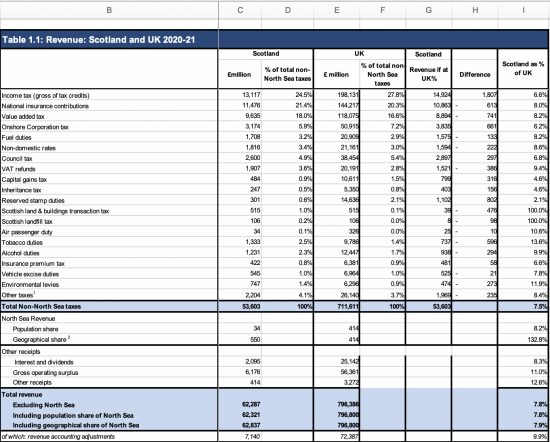 I have shown column headers to make it clear I added columns F, G and H.

What I show is that income tax is underpaid in Scotland, as is corporation tax pro rate to the UK. On the other hand, apparently Scotland overpays all the taxes on consumption compared to the UK, such as VAT and the various duties on tobacco and so on.

This could, of course, be true. But actually data on VAT and the duties is not known in Scotland, and the claim that even income tax data is known cannot actually really be said to be true: these are estimates. On the consumption taxes the estimate is based on people in Scotland having higher spending in proportion to income, and so paying more consumption taxes. This claim would be supported by the suggestion that incomes and profits in Scotland must be lower than in England because proportionately income and corporation taxes are lower.

But, suppose that is not true? No one actually knows how much profit is made in Scotland and no one will until there is a national account for it.

And no one also knows how much Scottish rent and interest paid is subject to tax in England when it should be taxed in Scotland.

And since wages only represent half of GDP the obvious fact that GDP may be shifted out of Scotland to present distortions is high, with tax being understated as a result.

I am willing to buy the story that the Scots overpay direct taxes and so are penalised by the lack of progressivity in the UK tax system. But I also think that income and corporation taxes, as well as capital gains taxes and inheritance taxes, are all seriously underpaid in Scotland - because the owners of that income and that wealth in Scotland pay their taxes on it in England.

How much would the adjustment be? It looks like to would be at least £3,000 milliu0n based on this data, although that is just a very rough estimate. That's around 5% of Scottish revenues though - and enough to cut the deficit by a  significant amount as a result. In other words - even the apparently consistent income side looks wrong - because maybe it always has been.

But let's look at the spend. Here, very oddly, GERS makes no direct comparison with the UK: 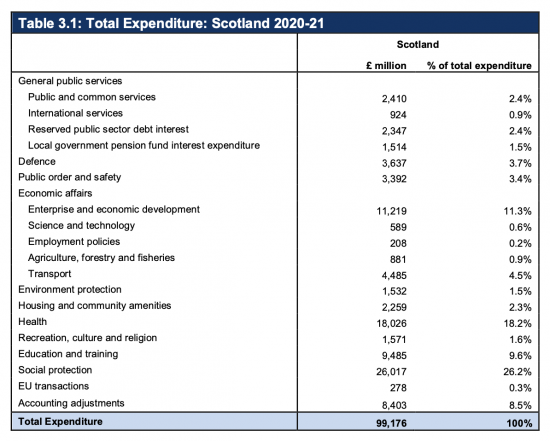 So, let me add the UK data and interpret it a bit: 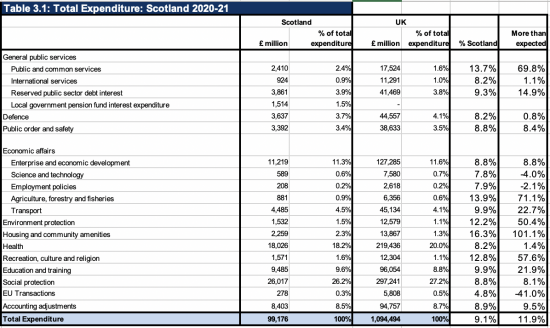 The four columns on the right are my workings.

First, notice that Scottish data is inflated compared to the UK by including local pension fund costs, which are not in the UK data, which you might say is odd.

Then note how different the weightings of total spend are.

But the really interesting columns are the last two. The penultimate column shows the percentage of the total UK spend allocated to Scotland. Scotland had an 8.1% population share in 2020.

In the final column I compare the allocated share to Scotland with the anticipated 8.1% share and state the difference as a percentage of that 8.1% share. And then some really odd facts come out. For example,  why has Scotland got a disproportionately large share of interest payments, picking up almost 15% too much?

And why are common services so heavily, apparently, biased to Scotland?

Even accounting adjustments are over-apportioned to Scotland.

If these areas - which are likely to be simple apportionments - are overstated how reliable is the rest of the UK spend apportionment? I would suggest that the chance is very low. The evidence that costs are being piled onto Scotland looks to be very high to me based on this data.

I am trained as an auditor. The first thing I do when looking at any data is to make sure that it looks credible. Bluntly, and as ever, the data for 2021 within GERS looks to be wrong on both income (understated) and expenditure (heavily overstated).

But let's also look at what the auditor also asks, which is does this data first the need of the user? Here the GERS document says:

What Questions Does GERS Address?

GERS addresses three questions about Scotland’s public sector accounts for a given year:

So, are the questions answered is what I have to ask?

With regard to question 1, the answer is we simply do not know: we do not know that Scotland's taxable income is fairly stated and we have no clue of what proportion of some tax were paid in Scotland. So the data on revenues is likely to be wrong.

With regard to 2, the data is just wrong. That's not just because the data estimates look wrong but also because of something else that is very important. In 2020/21 about £300 billion of the costs of public services in the UK as a whole were not paid for out of taxes. They were paid for by quantitative easing. There is not a single mention of this in the GERS document. But what that means is that actually total spending out of taxes was not £1,094,000 milli0n as the above data implies. They were actually about £800,000 million, or £800 billion. That QE is never going to be cancelled whatever the Bank of England says. In that case, the question asked is the wrong one: the UK did not pay with taxes for all the spend incurred so why should it be claimed that Scotland must?

And as a result the equation supposedly implicit in the third question is a false one.

The data in GERS is unfit for purpose. It is very likely wrong. And it does not answer any fair question that can be posed about the actions of any government of Scotland.  All we need to do is keep pointing that out in that case.

And keep asking that the Scottish government do better. I remain baffled as to why they do not want to do so.