Solutions matter when it comes to campaigning

Earlier this week I wrote a Twitter thread on why national insurance should not be used to fund social care. I reposted it on the blog, but it was a quiet day for reads here; relatively speaking the issue was not well noted.

The idea that national insurance should pay for the increased cost of social care for the elderly is hideous. It reveals that the government does not know how tax works, how the economy functions, or how tax impacts inequality. A thread……

This is the data on how well that has been read now: 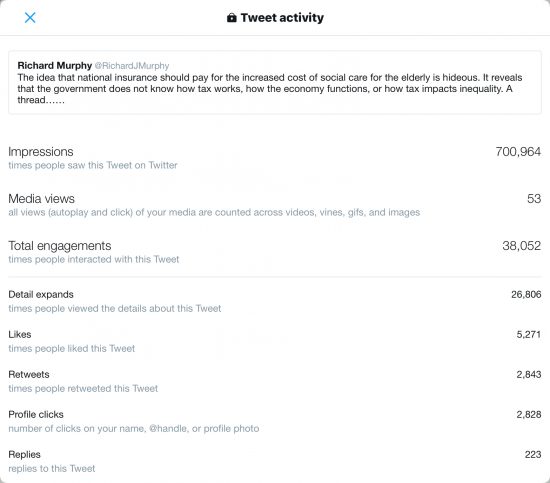 Very clearly 700,000 people did not read that tweet: reaching a person does not equate to tweets read. But equally, reads are also likely to be somewhat higher than the number who engaged with the post. Reading does not require reaction on Twitter, which is what engagements monitor.

Surprisingly, reactions for tweets much further down the thread are also high; people read their way through this.

Why note this? Four reasons.

First to note that sometimes blogging is not the best outlet for effort,  even if it has underpinned my campaigning for fifteen years now.

Second, to note that this issue has resonated: there is political mileage in this, I would suggest. Opposition parties will, I hope, note this.

Third, to note that explanation remains key to campaigning. So much of the comment I read on this issue assumed a high degree of knowledge of a reader on tax issues when many do not have that. The tweet thread explained my logic as it progressed.

Finally, to reiterate a conviction I have had for a very long time. I put forward range of  alternative  policy options in this thread. Solution focussed campaigning is essential, in my opinion, and the more options that can be offered the less prescriptive but the more useful the contribution is.

I need to remind myself of all these things from time to time. That’s why I note them here.