How large companies can manufacture profits to permit dividend payments

I have noted in earlier blogs that new research that I have been involved in, with colleagues, has shown that at least 20% of FTSE 350 companies in the decade 2009 — 2019 may have over distributed their profits to their members, and that another 20% of those companies may have been close to doing so. At the same time, those same companies showed the weakest levels of sales growth, growth in value added, investment per employee and other key ratios that indicate the strength of underlying economic performance. The companies that showed more restraint in their distribution policy also, broadly speaking, delivered better underlying economic performance.

There is an obvious issue in this. Most people involved in accounting and finance presume that the purpose of a company is to make profit even if s172 of the Companies Act 2006[1] makes it quite clear that this is not its sole purpose. They do then presume that the presentation of consolidated financial statements provides indication to the shareholders of the directors’ fulfilment (or otherwise) of their duty to undertake this task on behalf of those members. There are, however, good reasons for thinking that this assumption is not true but that accounting does not make that at all clear.

It can be entirely reasonably argued that a company is not owned by its shareholders. What the shareholders do instead own is the equity share capital issued by the corporation. They enjoy the privileges of ownership implicit in those shares[2] but what is very clear in law is that they have no claim on the underlying assets of the firm. That is the quid pro quo of their limited liability: in exchange for limiting their debt liability with regard to the corporation shareholders relinquish any direct claim that they might have upon the assets of that corporation, excepting when the directors may wish to grant that to them by way of payment of dividends or buy back of their shares, and in the event of liquidation if, perchance, there are excess funds available for that purpose[3].

The essential nature of the peripherality of the shareholders’ claim on a company is implicit within that explanation: it is only when or if others consent that the shareholder has a claim upon a company. In that case there is very good reason for thinking that the consolidated group accounts of a public interest entity (PIE) are of relatively limited consequence to the shareholder, and the fact that this is known by some at least is acknowledged in UK company law by the requirement that the balance sheet of the parent company entity of the PIE be published within the group consolidated financial statements.

Although few seem aware of it, by far the most important statement of concern to any shareholder of a PIE is this parent company balance sheet because it alone determines the extent of the profits available for distribution by the PIE to its equity membership. This is the case because for the purposes of equity share distributions it is the retained reserves of the group parent company and not those of the group as shown by its consolidated financial statements that determine the extent of realised reserves available for this purpose.

There are those who might have good reason to be pleased by this. For example, these are the consolidated and parent company balance sheets of GlaxoSmithKline plc[4] as at 31 December 2019, with the group being shown first: 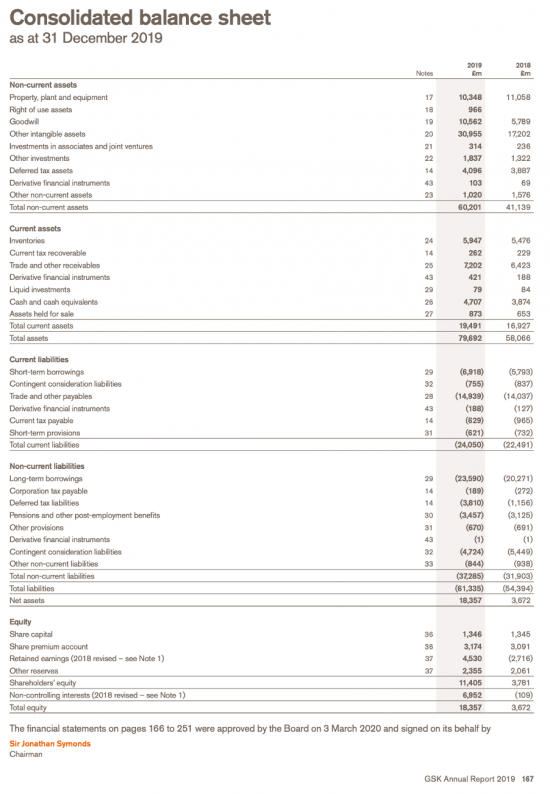 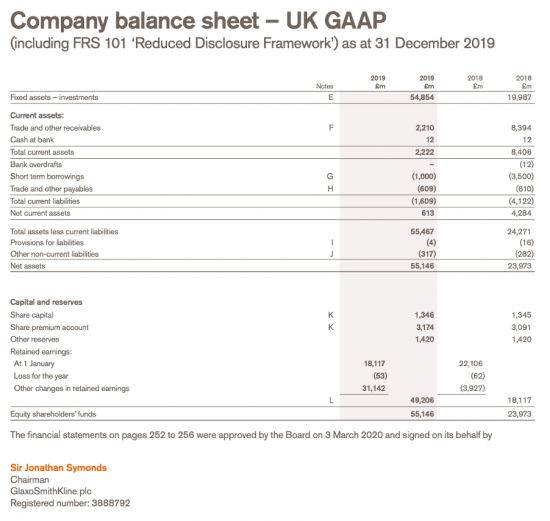 Neither movement, it should be noted, has much to do with the trading performance of the year. The total comprehensive income for 2019 according to the same financial statements was £2.9 billion, out of which almost £4 billion of dividends were paid, meaning that it would be logical for reserves to have declined by £1.1 billion, and yet the funds available to the shareholders in the parent company and in the group appeared to have increased by a much greater sum. In the group that is because of an accounting decision to recognise value in a joint venture which had previously been excluded from account, totalling £8.1 billion, whilst the massive increase in reserves in the company related almost entirely to a distribution from a subsidiary company that clearly did not relate solely to the activities of the year in question.

The relevance of this should be apparent. If the shareholders can only benefit from the distribution of reserves, and these are seemingly calculated within the accounts of the group parent company, and not the group itself, then very obviously the shareholders only need the consolidated data to indicate the capacity of the PIE as a whole to raise loan funding to make dividend distributions in excess of retained income, as has been the recurring pattern within Glaxo Smith Kline, as it has been (as our research shows) in many FTSE companies. It is the parent company balance sheet alone that determines whether they can expect dividends, and in the case of many companies, of which Glaxo Smith Kline is just an example and nothing more, it is that parent company balance sheet that most often permits dividend payments when the group balance sheet would suggest reserves are not available for this purpose.

The significance of understanding this is that it shows that the ability of a PIE to pay dividends is not dependent upon its ability to generate profits but is instead dependent upon its ability to generate distributable reserves within the group parent company and to provide cash resources to make distribution of dividends possible, with borrowing being at least as likely to provide the latter as profit generation.

There are two basic ways where this situation can arise. One is where profitable subsidiary companies pay all their dividends up to a group parent company, which parent company is allowed to ignore the losses made in other subsidiaries because it does not, for itself, prepare consolidated accounts and losses cannot be paid up to a parent by way of dividend. There is as a result inherent bias towards over-recognition of profit in the parent company. Careful group structuring can, admittedly, help this process. The outcome may not be completely neutral in that case, but it is wholly legitimate.

Alternatively, the ability to generate profit available for distribution within a group in excess of that made from trading is easy to demonstrate. It is stressed that the example that follows has nothing to do with Glaxo Smith Kline, whose accounts were used in the earlier example. There is no evidence that GSK is using the methods noted in the next example.

Presume that there is a group parent company of a PIE, called A plc. A plc has two subsidiaries. B Ltd sells the products that the group creates, and C Limited makes them. This is the group structure: 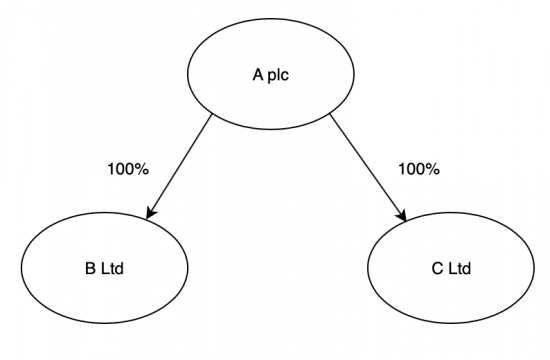 A plc does not trade. It is a holding, and if necessary, borrowing company.

Now suppose C Limited makes product that costs £100 million which it sells to B Limited for £80 million, which B Limited then sells to third party customers for £110 million. These are the only transactions for the year.

Then assume that A plc borrows £20 million which it in turn lends to C Limited, leaving B Limited with funds to match its supposed retained reserves having settled the price charged by C Limited. The £30 million of funds in B Limited are then paid as a dividend to A plc as the group parent company, and it in turn then pays a dividend to the shareholders, which it can because this dividend received will then constitute its sole distributable reserves in its capacity as a parent company, and not as a group entity.

As a consequence B Limited and A plc (as a parent company) have no reserves, and the group has negative reserves of £20 billion, as does C limited, whilst a dividend has legally been paid, much of which never represented a real profit arising, but which were nonetheless recognised as realised and distributable within the group structure that has been created. This is despite the fact that most of the retained reserves used to manufacture that dividend arose as a result of the use of transfer pricing mechanisms, which might have to be adjusted for tax purposes but which do not require alteration for corporate reporting purposes. The creditors have now funded a legal dividend to shareholders which has not, in large part, been earned. This is the consequence of financial engineering. The world has been used to transfer mispricing being used for the artificial reallocation of profit for tax purposes. What this example shows is that it may have other, quite different, uses for the generation of profits available for distribution in excess of those available to a group as a whole as well. There is, it is stressed, nothing illegal about this, or the adoption of the group structures that make this possible.

The point being made here is that current UK accounting rules in use also permit this outcome without adequately explaining how it has arisen, albeit that the figures used may be exaggerated.

The point of this example is, then, threefold. First it shows how peripheral to the interests of the shareholders the group consolidated accounts of a PIE really are.

Second, it demonstrates how easy it is to manipulate the reported capacity of a group of companies to pay dividends within the existing framework for both determining those dividends and reporting the activities of the group in question, both of which lay themselves open to enormous risk of being arbitraged.

Third, the point is made that if the creditors of the entity being audited are to be protected from exploitation by shareholders, which this example demonstrates to be completely possible, then it is essential that risks of this type not only be made apparent, but be audited and reported upon. However, existing frameworks of accounting and related disclosure requirements, do not require this. As such the inherent risk of audit failure within existing accounting frameworks is significantly increased. That is an issue which the current review of auditing should be addressing. It is not clear that it is. And that should be a matter of concern to all who are worried about the credibility of UK financial reporting, the credibility of stock market investment, and the risks that investing without this data has implicit within it.

[3] We are aware that there are a few occasions in standard Articles which might suggest shareholders do have power over the directors, but we consider this inconsequential in the case of PIEs because there is little evidence of such powers being capable of use.