A week ago I published here the weekend essay I had written for the Jersey Evening Post, published by them on June 26. I made the suggestion that Jersey has a future, but not with its finance industry, which I think is moving into its twilight zone in the Island as its markets are progressively closed down by the advance of tax justice.

It would seem that Jersey's former Chief Minister and current Minister for External Relations (they do love their titles in Jersey) Senator Ian Gorst did not like what I had to say. The response came this weekend. This was the headline: 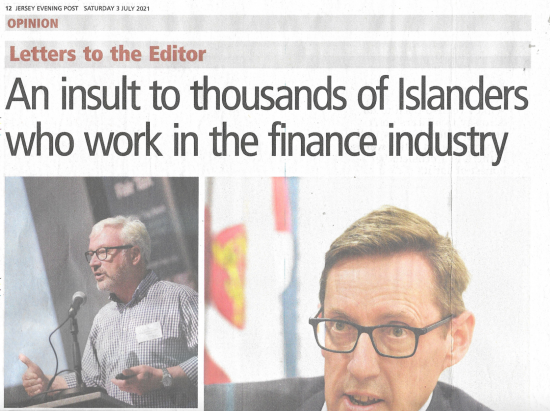 I would, of course, reject that suggestion. It was elaborated in Senator Gorst's letter (click on the image to expand it: you may need to do this more than once):

I think Senator Gorst doth protest far too much, not just about what I said but also in his angry outburst at the Jersey Evening Post, which as I have noted came out very strongly in support of my argument that the Jersey tax haven has not been run in the interests of the people of Jersey.

The reality is that Jersey has, contrary to what Senator Gorst says, been dragged, kicking and screaming out of its darkest days as a tax haven. It was forced to end its abusive tax regime by the EU  in 2005. It was finally forced to be compliant with EU requirements in 2010. It fought information exchange long and hard from 2005 to 2013. It opposed beneficial ownership disclosure. Even a few weeks ago it very publicly opposed Biden’s tax plan; now it applauds itself for signing up to a plan they could not beat. The suggestion that Jersey has ever been enlightened or has ever taken action to improve transparency is absurd. It simply has not.

And there is good reason that. Offshore is not a reference to geography. Offshore refers to a regulator presuming that a transaction does not need to be regulated because it is deemed to happen ‘elsewhere’, which is anywhere beyond the boundary that a government chooses to draw around itself. In other words, the whole purpose of Jersey, as an offshore centre, is not to be geographically separate from places like the UK, but to instead be regulatorily separate from the UK and other countries. Its aim is to offer lighter touch regulation to attract business, knowing that in the process it undermines the law and regulation of the countries where the transactions recorded in Jersey should really be disclosed. That is the only reason why Jersey’s finance sector exists; it offers light touch, low tax regulation that undermines the law and regulation of other places. The cost of recording transactions in Jersey cannot be explained otherwise.

Ian Gorst claims that this policy is good for Jersey. He justifies it by that claim. But what he ignores is the external pressure on Jersey that has steadily closed down successive parts of its business offering, as I have detailed. That pressure will continue. As I predict, the remaining business available to Jersey is in steady decline because tax justice is winning. Ian Gorst refuses to recognise that. He has no plan for that eventuality. Instead, as I said in my article, he follows ‘the Jersey way’, which is to pretend a problem does not exist and to tell those who point it out that ‘there is a boat in the morning’, suggesting that they should go away.

Senator Gorst would like me to go away. I won’t. I will still point out that what Jersey is offering is internationally unacceptable to most countries, who are steadily (too slowly for me, far too quickly for him) closing down what he thinks to be Jersey’s lifeblood. He can deny it, but all the evidence is on my side.

The Senator needs a macroeconomic plan, rather than a tinkering at the edges of its tax policy, to which he refers. But he has not got one. Nor has anyone else in the Jersey power elite. And that is why the Island is in trouble.