As Transparency International reported yesterday afternoon on an issue very close to my heart:

Transparency International EU, the Brussels office of the global movement against corruption, has welcomed today’s decision by the EU Council of Ministers to support a new law designed to bring greater transparency to the secretive world of corporate taxation. But the organisation also said the proposal needs further strengthening.

After years of deadlock, the Portuguese Presidency of the Council managed to secure Member State agreement on so-called public country-by-country reporting (CBCR) by multinationals. This is a significant step towards greater corporate tax transparency that will allow citizens to see for the first time how and where large companies pay their taxes.

Despite the political deadlock in the EU Council that has so far prevented the adoption of EU legislation, voluntary reporting practices by companies have been growing. Last year, the world’s largest voluntary sustainability reporting process, the Global Reporting Initiative (GRI), adopted a new standard introducing public CBCR for all reporting companies.

The result of today’s Council vote will need to be reconfirmed by all Member States in writing next week due to the current Council rules of procedure, as the debate took place online.

There is a warning though:

The proposal will now enter into negotiations between the Council, Parliament and Commission. While we welcome this step forward in the process, the current legislative proposal contains several serious loopholes which must be addressed to achieve meaningful transparency. It is particularly important to ensure that multinationals report on a country-by-country basis for all countries where they operate — not just EU Member States — and that loopholes which allow corporations to delay or avoid reporting are not introduced into the final legislation.

I note the caveat, and think it is a big issue. But, I cannot help but be delighted by this news. On 14 January 2003 I published this on the Association for Accountancy and Business Affairs website, where it still sits at the top of the page: 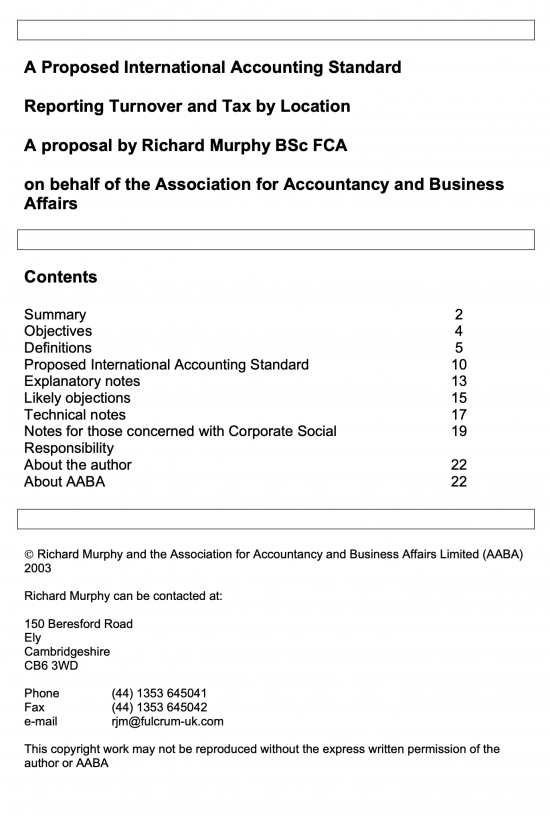 With that the story of country-by-country reporting as we now know it, and the campaign for it, began.

At a technical level I have been heavily engaged with it ever since, arguing the case for it in OECD BEPS, for example, in many visits to Paris in 2014 and 2015. I was also a contributor to the more recent GRI version. But, the reality is that country-by-country reporting would not have happened without the Tax Justice Network, which admittedly I co-founded, and the hundreds who have campaigned for it in many other organisations ever since, plus support from MEPs in particular, with the Greens and S& D Group perhaps deserving special mention.

I am pleased that country-by-country reporting is now tax law in more than 70 countries.

Holding multinational corporations to account for what they do locally - where they really impact on people's lives - has always been my aim, on top of the requirement that they pay the right amount of tax (but no more) in the right place at the right time where right means that the economic substance of the transactions undertaken coincides with the place and form in which they are reported for taxation purposes.

This latest win suggests we are slowly, but surely, getting closer to the day when that goal is fulfilled.

My very first campaigning document* is getting closer to fulfilment.

It is the first ever accounting concept created in civil society.

It is the first ever accounting standard that will be imposed without the profession engaging with it, because they will not embrace its ideals.

It is an indication that solution focussed campaigning and persistence can work.

It is cause for hope.

I thank all those who took my idea and have run with it. I am truly grateful.

Now, there is still more to do. But the move is in the right direction.

(* The second was on what might now be called recovery bonds. Good ideas take a long time to get to market).