There are, I admit, moments when I find those promoting MMT deeply annoying.

An occasion when this was the case occurred yesterday. The Gower Initiative for Modern Monetary Studies, whose work I largely avoid partly because it reflects Bill Mitchell’s intolerant approach to MMT, and partly because they seem to enjoy maligning me for not embracing hardline MMT as they see it, and partly because of their small-state views with regard to tax, yesterday promoted an old comment from Warren Mosler on the purpose of tax within MMT. I reproduce that comment at the bottom of this post to provide opportunity for anyone who wants to read it, but also not to disrupt my flow.

To be candid, whatever Warren meant by his comment in 1993 is not entirely clear.  But presuming I interpret it correctly, what he says does, I think, embrace six ideas.

First, he suggests tax primarily exists to create demand for a currency.

Second, he clearly implies that tax is of secondary consequence in the fiscal cycle because the capacity of a government to create its own money is unlimited.

Third, he then argues that tax should not impede trade or the pursuit of profit from a Ricardian perspective, but that they do at present, whilst also creating substantial transaction costs.

Fourth, he then concludes that taxes on sales or labour should not be charged and that taxes on land should be used instead. It is also worth noting that although not said in this piece, he also argues companies should not be taxed on their incomes.

Fifth, he argues that we should be indifferent to wealth and disparities in it, unless it leads to excess consumption, which might be discouraged with a luxury tax.

And sixth, if we wish for progressive tax, land taxes can anyway achieve that goal.

I take considerable objection to all these ideas. To be blunt, I think they are wrong, and have long said so. For a long time I would not embrace MMT because of them. It was Stephanie Kelton who persuaded me I could embrace MMT despite them. But I note they persist. And when they were reposted by Mike Hall (another person who appears to take much pleasure in offering abuse about me) I made that clear. My comment said:

[This is] utterly indifferent to social justice.....if I wanted such policies there are ample choices available on the right. This stuff is all that is required to discredit MMT forever. It’s the statement most akin to that made by Peter Mandelson about being intensely relaxed about wealth that I have read for a long time. I see no correlation at all between this and what the people of Scotland might ever want.

Saying this, I immediately placed my comment in several contexts. The first was that whatever the pure theoretical context of Warren’s comment I was looking at it from the perspective of political economy, where concepts of social justice and power relationships based on, amongst other things, wealth and the distortion they create in the allocation of resources really matter.

Second, I was looking at this from a pragmatic political perspective, where such commentary is the basis in which much of the ridicule of MMT can rightly be based because, to take just one example, it is very clear that governments cannot create all the money they want without consequence.

And third, given that this was posted in a group with a Scottish perspective, my reading of what the people of Scotland wants would suggest that this comment would be deeply alienating to most. That would partly be because of its embrace of pure markets. And partly because people know pure markets do not exist. But even more, because people are really offended by the outcomes markets generate and will be repulsed if they think MMT’s aim is to deliver unfettered market outcomes as this commentary implies.

Fourth, that’s also because people in Scotland do not, as far as I can tell, want to embrace Peter Mandelson’s attitude to wealth. And also because they would rightly know that pre-distribution cannot solve the current inequality in Scotland, however much it might help to do so in the future.

Finally (for now) nor, I am quite sure, do people in Scotland believe that land taxation would create the demand for the currency that other taxes might. After all, if trade is untaxed, why should the currency be used in its ordinary course? In that case although they might not formulate the idea precisely, Scottish people might instinctively realise that the claims made do not in any sense logically flow through what Warren wrote. Even at the theoretical level his claim appears very unlikely to be realistic (my kindest interpretation).

And with all that in mind I objected to the posting of such comment in a group that I think has the job of delivering sound MMT comment relevant to the state of Scotland as it actually is with its current faults, inequalities, practical realities and social desires all taken into account. In that context I felt this comment utterly unhelpful. Candidly, I would call it highly effective trolling intended to discredit what MMT thinking can, I am quite sure, offer Scotland.

I was abused for implying this by some. Others suggested disquiet that argument was entered into. Jim Osborne, however, offered a powerfully insightful comment in my defence. He said this:

Jesus...is this not an exposition of the heartless economics of unadulterated MMT. MMT expresses truths about sovereign money but money is not reducible to MMT. Money encapsulates social values - it is a function of human relationships, not some stripped down cold as steel "technology". MMT has no theory of social value - the purpose of money. It is an incomplete theory...true as far as it goes, just as Newtonian physics is true as far as it goes. Richard Murphy is right when he talks about "social justice" as that is about social value. If MMTers fail to understand that money is political - an expression of relations of power -they fail to understand that money has purpose and without choosing "purpose" then MMT accedes to the power relations of the status quo. MMT gives us options but it does not tell us what options to choose. It is not enough. Richard Murphy knows this and he is right.

Jim hits the nail on the head in a great many ways, frankly better than I might have done. Most especially he is right when he says ‘MMT has no theory of social value - the purpose of money. It is an incomplete theory...true as far as it goes, just as Newtonian physics is true as far as it goes.’ That is extraordinarily succinct.

To that though I would add some further comments, all of which are additional to and in no way disagree with what Jim has to say.

As many will know I think there are six reasons to tax. They are:

The first two of these relate directly to MMT. And to those who say inflation is not the primary purpose of tax I will say they are wrong, and Stephanie Kelton goes out of her way to say so in The Deficit Myth.

The next three all relate to social justice dimensions of tax. Each Is there to address the market failure that Warren Mosler does not seem to wish that tax address.

And the last is fundamental. Tax is not an annoyance to be laid aside as a cost to be mitigated if at all possible, as Mosler suggests. It is the consideration payable within the social contract that binds us as nation states with common interests. It is what empowered, enables and enlivens the politics of a nation precisely because the role that tax has to play in that society is in, a great many ways, the embodiment of the debate on what values that state wishes to project. If MMT’s goal is to suggest otherwise I would have nothing to do with it. But I do not think that is what MMT says. And if Warren Mosler thinks I am wrong, so be it. Just because he thought MMT up does not make it his property, and it is not a religion, and nor does he require veneration even if wrong, as I am quite sure he is within the context in which I make this comment.

Let me offer another wholly pragmatic reason for my comment. The almost pure Georgian view of tax as a land based charge that Mosler promotes is something for which I have no time for a very good reason.

First it assumes all rents are land based. They are not. Rents also come in many other forms that are wholly unrelated to land. If Warren wants them left untaxed, I don’t.

Second, this base has nothing to do with capacity to pay. It will therefore promote inequality.

Third, by removing the linkage between earnings and tax the overall capacity to tax is dramatically reduced, and if inflation is to be prevented so too in that case is the capacity to create money constrained. A small state, wholly unable to support the needs of the people of Scotland, would be the outcome, and I object to that being promoted in the name of MMT and reserve the right to say so.

Last, Warren Mosler had what seems to be a remarkable limited understanding of tax systems. Since their administration does, in effect, only free-ride on the need to record transactions for other purposes their marginal cost is small. And it cannot be claimed MMT can ignore those costs of recording transactions, because not only are they real,when MMT suggests all money is debt the keeping of rigorous debt records becomes critical to the proper functioning of the economy, and so too then is transaction accounting. The marginal cost of tax estimation once that is the case is small. Warren misunderstands this, quite fundamentally, missing in the process the essential role of enforced transaction recording to ensure smooth operation of a monetary economy that is an essential pre-requisite of MMT in the process, which happens to be reinforced by tax.

So do I regret raising this issue, as some implied might be appropriate? Not in the slightest. Just as I completely reject the suggestion that I am picking and choosing which parts of MMT I want to use. I am only interested in the use of MMT as a tool for the management of an economy that delivers social justice. If others want to use it to promote small state, pro-market fundamentalist solutions they can, but I will object whenever I see it.

MMT is not value free, and it is ludicrous to pretend it is. When applied it will always have value attached. The only value I am interested in having attached to it is that of social justice. Any other use is abhorrent to me. And so I will object to arguments of the sort I noted here precisely because, and to reiterate, they have no place in my opinion in anything to do with MMT in Scotland.

This was the quote from Warren Mosler: 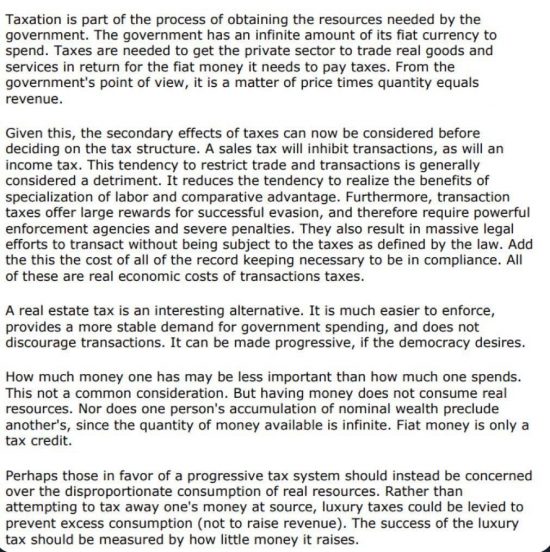