The EU talks: stuck somewhere between English arrogance and inability

There is only one news story this morning. It is as if the world has put all else on hold. Brexit is the issue of the day. All else can wait.

And wait it probably must, because we are dealing with Boris Johnson, of course, and he is not a decisive man. A prevaricator, maybe. An appeaser, definitely. But a man possessed of knowledge of his own opinion, let alone the reason for holding it? That he is not.

This matters. Even today, as fishing issues are resolved by allowing a seven-year transition to whatever the new rules might be, during which time I suspect all parties know substantial revision might take place, there remains the outstanding question of what might be called sovereignty. Or rather, there is the question of how sovereignty must always be compromised in the course of making any agreement of mutual benefit with anyone.

According to Robert Peston, who has a leaked government document on reasonable worst-case scenarios for the talks, the stumbling blocks are: 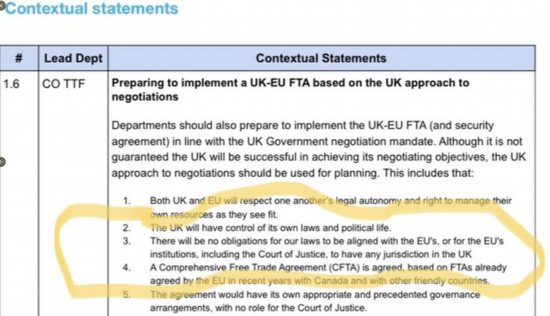 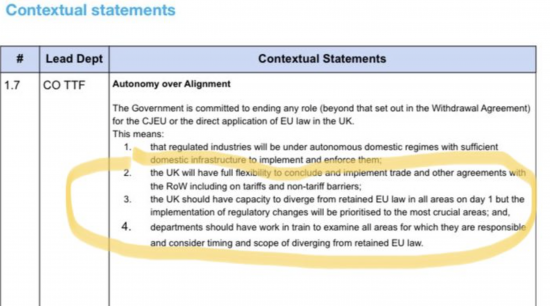 I suspect something like this may be true. If so, I have to (unusually) agree with Peston: what are the tasks now about? Indeed, what have they ever been about? It would seem that the entire reason for these talks has been misunderstood by the British team from the outset. They were always about agreeing how the sovereign right of a state to do what it wishes will be compromised in finding agreement with others.

This should hardly be a surprise. Just about every human interaction is about exactly that: the question we always ask of our partners, children, colleagues, friends and others is how we will compromise our right to do exactly what we like to co-exist in reasonable harmony with others? The proverbial joke about couples needing to agree how the dishwasher will be stacked exists for a reason: in some relationships this is the point where compromise is difficult. In others it is the lid on the toothpaste. There are ample other examples. Each is a metaphor for the stress of finding reasonably harmonious co-existence. And if the Cabinet has reached its collective combined age without realising this, and simultaneously having the will to impress on a prime minister always known for his inability to appreciate the needs of others, then we really do have to worry. Johnson was, of course, noted to lack this ability by a master at Eton. I suspect nothing has changed in his case. And that summarises the unpredictable question of fate that now hangs over us.

The required ability to make a deal with the EU is a simple one: it is that necessary to reach a compromise. If Johnson sits it out, demanding as the paperwork suggests has been the case to date, that he get things all his own way, then there is no deal.

And from a European perspective that will very obviously be better than a bad deal. It is clearly the case that if the UK wants to trade with the EU it must agree to do so in ways compliant with EU standards, determined not just by its legislation, but also its courts. That is a basic condition for a trade deal.

We can, of course, argue for divergence within the UK and no one would deny that right. But we have then to agree to border checks to detect that non-compliance with EU standards. That is the entirely fair price of divergent standards. That this creates internal borders for the UK because of the pre-agreed Northern Ireland protocol is one of those things that simply has to be embraced. And that is not unreasonable. It is just the price of compromise.

I am pessimistic. I doubt Johnson has the ability to compromise. I doubt he thinks he has the room to do so either. The red lines were drawn by May in absurd positions. Johnson has not moved them.

Candidly, all that time talking looks to have been utterly pointless. I could be wrong, but the basics for this agreement never appear to have existed and I am not sure I can see them materialising now.

The narrative of British exceptionalism giving rise to British entitlement has always underpinned the discussions. Without compromise it was also always going to kill them. And that’s where we seem to be, stuck somewhere between arrogance and inability.

Wasn’t this always the English way? Maybe that way has run out of road. Perhaps the realisation that we have reached the point where bombast does not work has arrived. But I seriously doubt it. I think some pain will have to be suffered first. The appreciation that England is nothing special after all will have to come at a price. My fear now is about just how big that price will be.