It would seem that I walked into another minor hornet's nest when tweeting, and then blogging, about Tax Watch UK director George Turner's suggestion that the distinction between tax evasion and tax avoidance should be eliminated in considering how HMRC tackle tax abuse and that, instead, all activity that seeks to reduce a tax liability should be treated as illegal, and so be subject to prosecution on the basis that it is cheating the public revenue.

I have to admit to having a certain feeling of dÃ©jÃ  vu here. I spent a great deal of time addressing such issues from 2005 to about 2013. The opening shots were in the Tax Justice Network's first edition of 'Tax Us If You Can' in 2005. This now seems to have disappeared from the Tax Justice Network website after its recent revamp. Next there was the Association for Accountancy and Business Affairs Tax Code of Conduct that I wrote. After that there was The Missing Billions for the TUC, and further reports for the TUC, which followed my own involvement in helping draft the UK General Anti-Abuse Rule, after which I wrote an alternative Bill that was presented to parliament by the late Michael Meacher MP. I have, in other words, done my time working on how to beat tax abuse. And in all these cases I came up with an answer to the problem that George Turner wants to address, which is that there are so-called tax professionals who sell tax schemes that he thinks are abusive.

Several lawyers, from left and right, have contacted me to support the position I have taken with George, which is that removing the distinction between tax avoidance and tax evasion will simply make it much harder to recover tax from those where it would be very hard to prove criminal intent but where it is quite possible to show that the scheme that they used did not work. In other words, if the aim is to change behaviour and not secure prosecutions then the retention of the distinction is vital. That is because if it is removed the cheats would know that the burden of proof required for prosecution would be very much higher than it is for a claim that a scheme does not work, with a civil penalty following on from that, and so would be emboldened by the lack of a category of behaviour called avoidance. I, of course, agree with that.

But there is more to it than this, importance as maximising the chance of recovery is (and it is paramount). To a very large degree my response to the lawyers who have told me that the line between avoidance and evasion is blurred and so not useful, and is even in jurisprudential terms 'nonsense', is to say 'so what?' Their position is to entirely misunderstand the way in which tax compliance works.

Of course all tax law has to be based in law. And the pedant will say that whatever is not illegal is legal, which is (in summary) the distinction made by the Duke of Westminster case in 1936, on the basis of which so many schemes have been spawned, so much unproductive labour has been spent and so much time wasted. But only a few ever go near that distinction. And that number is, I think, falling significantly in any case. It is glaringly obvious now that the chance that any scheme will fail is high. Giving credit to HMRC where it is due, their victory rate is impressive. And that is to be welcomed.

And the point here is not that prosecution is the aim, because that will never be the case, but that securing compliance is. All tax is ultimately paid voluntarily. The vast majority of people can be persuaded to pay tax either by conviction that they should, or because of a deep sense of law abidingness, or because they are given no choice by reason of it being deducted before they get their income, or because they can be persuaded cheating does not pay. And this can be achieved despite the intense ambiguity of much tax law which leaves the boundaries between honesty, avoidance and even evasion decidedly unclear even in some quite straightforward situations. How is that possible? I would suggest three things can create this environment.

The first would be having a tax authority that goes out of its way to help taxpayers be compliant. We do not have that at present, which is absurd. But we should, for example, have arrangements where a person proposing any course of action can seek guidance on it in advance so that if they do what they suggested they would then they know that they are not abusing the tax system. This, I suggest, would be a lot more constructive than branding people as cheats. I prefer positive to negative action. This requires significant investment in HMRC. So what? Al, tax justice campaigners should be calling for that, and this demand is inherently about justice too.

Second, we need a general anti-avoidance principle in UK tax law. I would, of course, suggest the one I wrote, which is the only one to ever go to Parliament. The intention of that version is clear. If it is apparent that any step in a transaction can only or mainly be explained by its role in reducing the overall tax paid on the transaction as a whole then it is deemed to provide a tax advantage and that step can be ignored when taxing the transaction as a whole. Of course case law has tried to achieve this aim. But I argue statute is required to reinforce it and give HMRC the certainty it needs when acting. This law would, however, primarily be designed to have a deterrent effect.

And then and third, it could be argued that the sale of a scheme intended to promote the inclusion of steps in transactions with the only or main aim of providing a tax advantage would be illegal, and subject to prosecution.

The advantage of this suggestion over George Turner’s proposal should I hope, be apparent. First, HNRC keeps all its existing opportunities to tackle tax abuse, which his proposal would deny them.

Second, existing legislation on avoidance need not be abandoned.

Third, the test I propose has legal precedent already; courts would have no difficulty with it.

Fourth, the test is a common sense one constructed in plain English. Anyone should be able to sense if an arrangement includes artificial steps to secure a tax advantage, or not.

And the test for prosecuting tax professionals is on a clear, statutory, and objective, basis, where the chance of winning is much higher than by seeking to prove the common law concept of cheating.

I do instead promote the idea that the job of tax justice is to come up with practical innovations that support the chance of effective tax recovery from all who fail to be tax compliant. Reducing the number of available tools, and reducing the range of unacceptable behaviours as George Turner suggests, will not achieve that. I doubt that what he proposes could even be legislated with any ease. On the other hand, promoting legislation that provides objective tests that flag unacceptable behaviour would change behaviour will achieve that aim. And I reiterate, that change in behaviour and not prosecution is the real goal. George Turner’s proposal is misguided.

I rest my case.

As example of the Bill I wrote, this the clause defining tax avoidance:

This is how a tax advantage was defined: 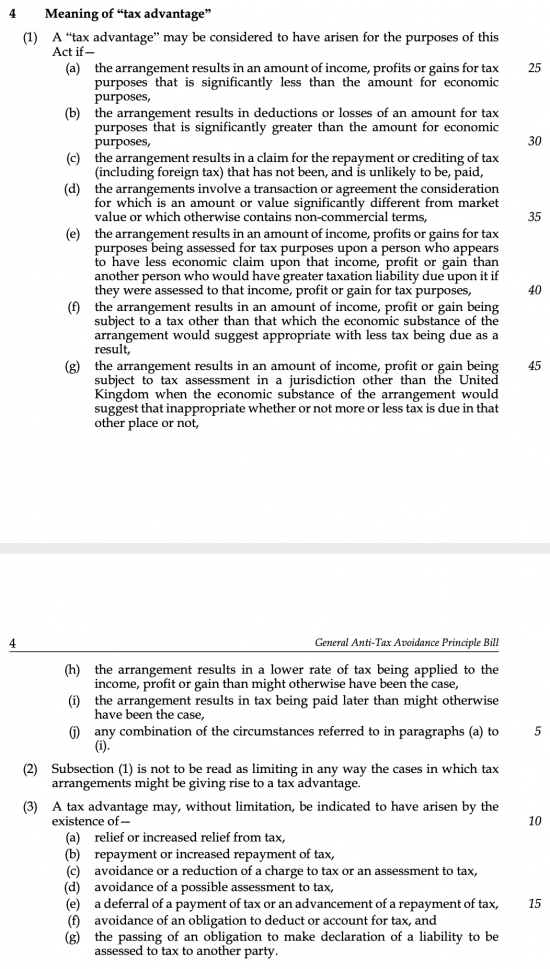 And this was the remedy: 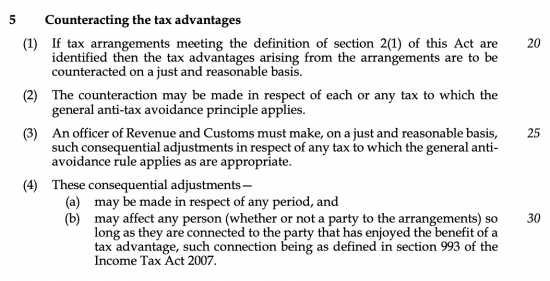 Prosecution could have been made. But I am much more interested in behaviour and that is what i think George Turner's proposal fails to udnertsand.

The Bill also included this requirement:

Not clause 8(4). Full disclosure is required. This is the real required direction of travel. Threats are not.