George Turner of Tax Watch UK published a paper and made a claim at an event yesterday that tax evasion is the same as tax avoidance, and both should be considered to be illegal. I regret to say that this is decidedly unhelpful. The reality is that behaviourally the difference between tax avoidance and tax evasion are very different.

As I wrote this about tax evasion in a recent, as yet unpublished paper:

More generally though, tax evasion involves the deliberate falsification of a declaration relating to a source of income to escape claims arising that the tax due on it should be settled. This suppression of data might include:

Evidence suggests that tax evasion is considerably more commonplace than tax avoidance in countries, whether so-called developed or developing economies are considered.

In other words, there is falsification here.  In contrast, I said of tax avoidance:

If a taxpayer arranges their affairs in a way specifically allowed or encouraged by tax law (for example, they pay part of their income into a pension fund and save income tax) they are not avoiding tax, even though they may pay less tax as a result. If the law permits this activity and the taxpayer reduces their income by paying it into a pension (which is very likely to mean that they defer their right to enjoy the income in question,) then this would not qualify as tax avoidance. In such a case, presuming all rules had been complied with and all required evidence is supplied, a tax authority would be obliged to provide the relief the law encourages.

This does not necessarily mean that the outcome of this activity is desirable or socially useful, but thje critical point is that tax avoidance is not about the use of tax reliefs, allowances and exemptions in the way that a government prescribes. The cost of that activity belongs in the tax spend/ expenditure gap. Tax avoidance is more complex than straight forward use of reliefs.

"Tax avoidance involves bending the rules of the tax system to gain a tax advantage that Parliament never intended.

It often involves contrived, artificial transactions that serve little or no purpose other than to produce this advantage. It involves operating within the letter, but not the spirit, of the law."

In that case much of tax avoidance is about the abuse, or manipulation of tax expenditures. Doing so remains strictly within the law, meaning that the taxpayers undertaking this activity are likely to avoid a penalty for their actions, and yet they are falling within the realm of tax avoidance. Examples of tax avoidance might include:

I then offered an explanation of what avoidance is using the work of tax barrister and tax justice campaigner Claire Questin, saying:

The mechanism to differentiate these behaviours has been defined by UK based tax barrister David (now Claire) Quentin[3]. If there is no risk of the transaction being challenged by a tax authority - because it is tax compliant - then even if it reduces the amount of tax to be paid by a taxpayer it cannot be tax avoidance because it is wholly within the spirit of the law. In these circumstances the tax saved would be a consequence of a permitted tax expenditure.

This is explained in this chart from Quentin: 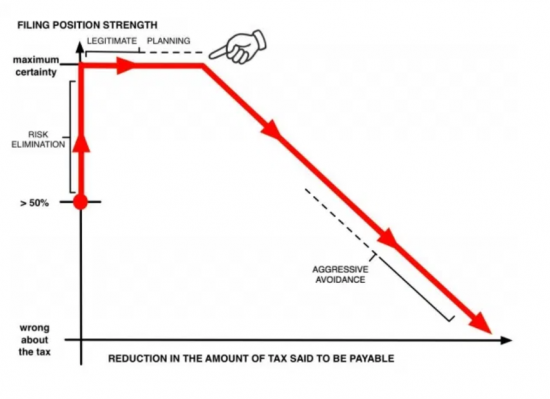 A person who is uncertain of the law is represented by the red circle on the vertical axis. If they take advice from their tax authority or a professional tax advisor they might considerably reduce their tax risk by increasing the certainty that their affairs are legally compliant: this explains the red line up the Y, vertical, axis. They might then make certain other choices that reduce the amount of tax that they might pay that are also legally certain e.g. they might pay into a pension or claim permissible tax reliefs for expenses that they have actually incurred. Both are permitted if relevant rules are complied with, and less tax is paid as a result. This explains the horizontal red line across the top of the chart.

However, a point is then reached where further reduction in tax paid is not possible without uncertain tax positions being adopted of the types noted previously: e.g., a transaction is represented as something that it might not be, or which is at least open to either legal or factual challenge. This is where the line begins to slope downwards.

Thereafter, uses are made of the law which are clearly open to doubt as to their legal validity: many marketed tax avoidance schemes are of this type.

The inflection point where tax expenditure becomes tax avoidance is clearly marked by the pointing finger on the chart. As a person descends down the slope on the right-hand side of the chart the uncertainty in the position that they have adopted increases until what is described as aggressive tax avoidance is being undertaken.

It is thus risk that differentiates claims that are part of the tax expenditure gap from tax avoidance. If there is a risk that the transaction might be challenged by a tax authority because the use made of the law is  not obviously compliant with the spirit of that legislation, or because risks in the interpretation of that law have been knowingly taken with the aim of securing a tax advantage, or because the facts that supposedly underpin a claim do not truly represent the economic substance of the transactions that have actually been undertaken, then the behaviour in question is tax avoidance.

So, tax advantage involves risk-taking in three ways. One is with regard to the law. The second is with regard to being found out. The third is that the chance taken with the facts  is so great that the issue tips into tax evasion.

Both evasion and avoidance do of course result in tax loss. But are they the same as George Turner claims and that, as he suggests, avoidance should result in a criminal investigation and prosecution? I think not. I am afraid George Turner is carried away by his own premise that:

Much of the focus of investigative journalism over the last ten years has focused on tax avoidance.

And it is held as an article of faith by many journalists, politicians and society more widely that there is a clear dividing line. Tax avoidance is legal, while tax evasion is illegal.

As Claire Quentin, and anyone who has worked in tax (which George Turner has not) knows, such clean-cut divides do not exist. Many things in tax are grey, unless one exercises so much caution that no claims are made - and that is clearly not what the law intends. So judgement has to be exercised. Of course some will abuse that. But is to criminalise judgement right? Of course it is not.

George Turne makes a category error, largely with regard to motivation. What he is assuming is that because tax may not be paid in both cases the activities are the same. That is akin to saying manslaughter and murder are the same because someone dies in both cases. Clearly they are not the same. And the distinction is essential, both to ensure a prosecution and to ensure that the sentence is right.

That's exactly the same in the case of avoidance. Avoidance does not necessarily mean a person goes free of liability. They can be made to pay the tax. They can be made to pay interest. They can pick up penalties for a lack of care. Those can be significant. And rightly so in some cases. But if criminality was required to be proved I strongly suspect none of that would happen: the case would very often not be proven to that standard and tax would not be paid, even if it would be as non-criminal avoidance. I presume that is not what George Turner wants. Nor would I. And so I do want a variety of definitions and means of redress to ensure that tax compliance can be assured, where tax compliance is seeking to pay the right amount of tax (but no more) in the right place at the right time where right means that the economic substance of the transactions undertaken coincides with the place and form in which they are reported for taxation purposes.

I would suggest that George Turner's crude attempt to lump these issues together for legal purposes will not help. this. By all means call both tax abuse. Both are that. But don't, please, suggest, that the chance of making redress be hampered by setting the wrong criterion for remedy to be effective, which is what is being suggested.