Would Scotland have a debt to the rest of the UK if it becomes independent, and crucially, what would be payable?

I had an exchange with the eminent UK constitutional lawyer George Peretz QC last night as a result of my claim in my response to Andrew Neil that Scotland would not owe debt to the rest of the UK in the event of it becoming independent. I have, of course already detailed this suggestion, making clear in my title at that time precisely what I meant:

However, this issue is important and so the exchange is worth sharing: 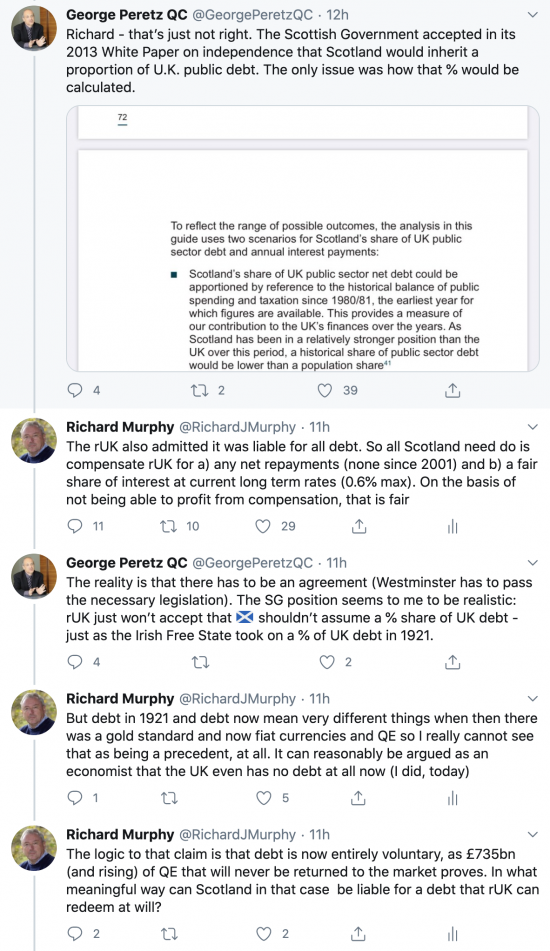 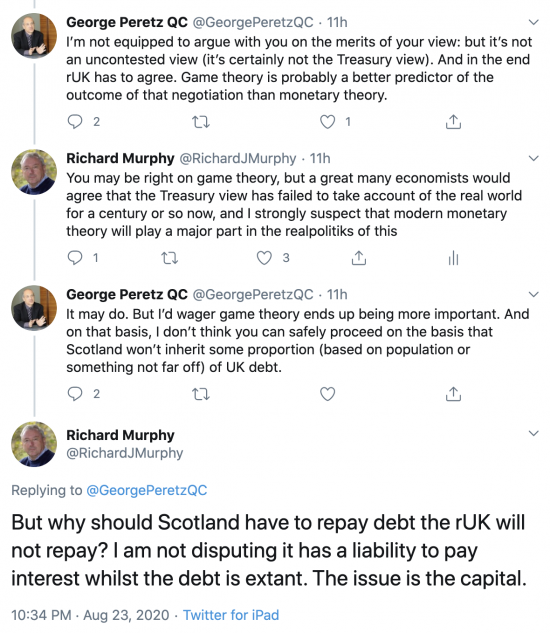 For the record, this is the first document George Peretz shared: 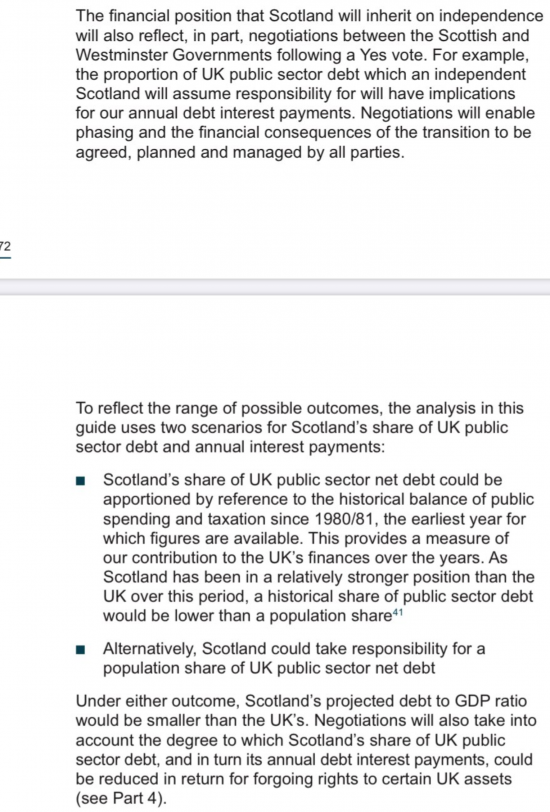 He also shared the 1921 Irish agreement that he claimed was a precedent: 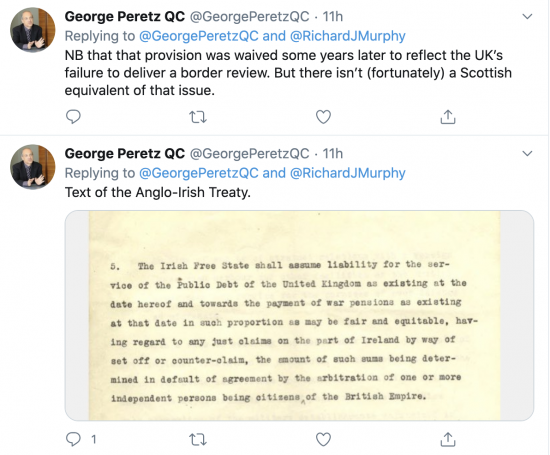 So, what to say? First, that I am grateful for the engagement.

Second, of course, I appreciate that there are differing views on this issue.

Third, I do not think the UK Treasury view is binding in the face of the wish of a country to be independent and it is slightly naive to think it is.

Fourth, to presume that a gold standard era agreement is now a precedent is absurd: that would be like arguing a provision for slaves might be required because in 1776 this could have been an issue when the US became independent. Times move on, thankfully

And fourth, to suggest game theory matters is no more than saying that everything is up for negotiation.

And that is just what I have said. But the key issue is a simple one, and was ducked, and that is the point I made in my first piece, linked above. In essence, this says this is a three-part process:

That's it. The rest of the negotiation on this issue would be padding. So what are the answers? They are, I suggest:

I strongly suspect I am right on 1, and that is allowed for in the document George Peretz notes.

On 2, there is no way Scotland could or ever should agree to repay what the rUK is not actually paying, and since the UK has not repaid debt since 2001 and has only repaid £37 billion whilst borrowing more than £1.8 trillion since 1946, I really do not see any repayment being at all likely - which is the basis of my claim to Neil.

And of course interest is owing, but on the basis of this suggestion, it will be no big deal.

In other words, I am agreeing with George Peretz and am then saying next to nothing is owing. Because it is not.

So why does this matter? I suggest it's because that unless this thinking is done now, and aired now, and becomes commonplace in discussion now, then the SNP negotiators with London come post-independence negotiations will not present a case like this, and so will get a bad deal for Scotland. And that is, I think, unacceptable. So this issue has to be addressed in this way now to ensure that it is on the table when the time comes, as I hope it will be.

There is no way on earth I want Scotland paying the rUK a penny more than it has to in any currency that might be in issue at the time. And game theory or not, what I have suggested is totally fair, and that's why I make the point. I would not waste my time otherwise.