New currencies in new countries are normal. What is all the fuss about?

I posted my tweets in response to Andrew Neil's comments on Scottish currency here, yesterday.

Last night one of the many responses was this one: 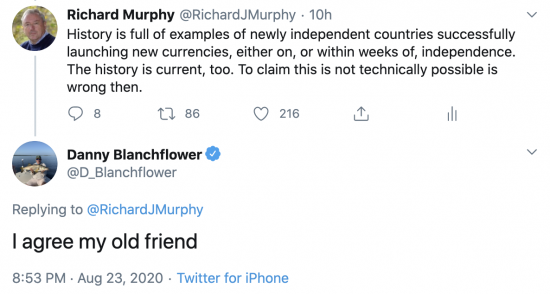 Danny and I are, indeed, old friends. For those who don't know him, Danny was also at one time a member of the Monetary Policy Committee of the Bank of England, where his approach to managing the 2008  crisis stood in marked contrast to that on f many others on that committee at the time, to his credit. I also rank him as the best labour economist the UK has right now, even if he does teach in the USA.

Why does this matter? Because Scotland needs support to make the case for independence and the more credible voices make that case the better. New currencies in new countries are normal. Getting people to agree that this is not an issue is important.