The true figure for unemployment is much higher than the Office for National Statistics is saying – and was likely to be at least 2.2 million at the end of June

This morning's unemployment data from the Office for National Statistics is a real curate's egg. Taken at face value there is no issue of concern:

Unemployment has apparently hardly changed; employment rates are still exceptionally high, and economic inactivity is apparently low. This is nonsense, of course: almost all the true data is hidden by the furlough scheme, which the ONS admits. In that case, what is the true figure for unemployment now?

This is very hard to tell. What is clear is that the number of people on payrolls has fallen by 730,000 since March. This is despite furlough. Given that this is real-time data this is a very good indication of the increase in unemployment over that period. It pushes the likely current figure, excluding disguised unemployment to at least 2 million.

But it's worse than that. For example, there has also been a record decrease in the number of self-employed people over this period: 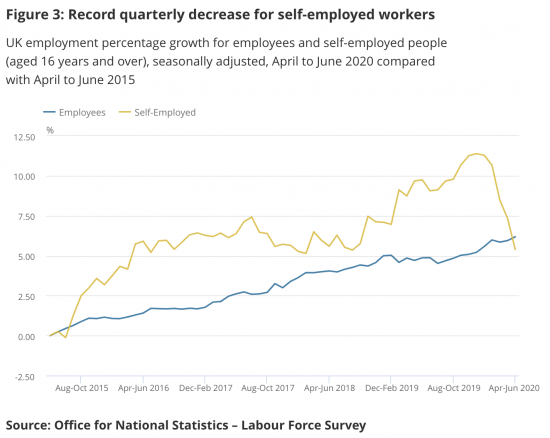 The actual decline in numbers was 238,000. These people should, then, be added to the unemployment total, pushing it above 2.2 million.

To compound matters, there are also record numbers of people leaving the employment market. As the ONS notes:

Those 161,000 are unemployed and not out of the employment market: we can be sure they'd be working if they could be. However, I will not adjust for them as they might already be in existing data.

Those on furlough remain high in number: 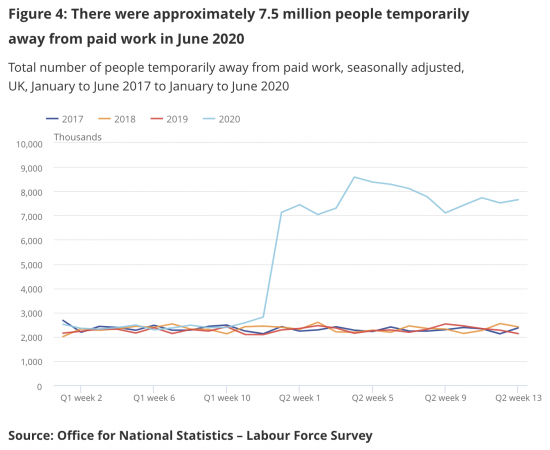 The implication is that well over 5 million people were still furloughed in June. No one can yet know how many of them are going to be unemployed.

And of those at work more are on zero-hours contracts: 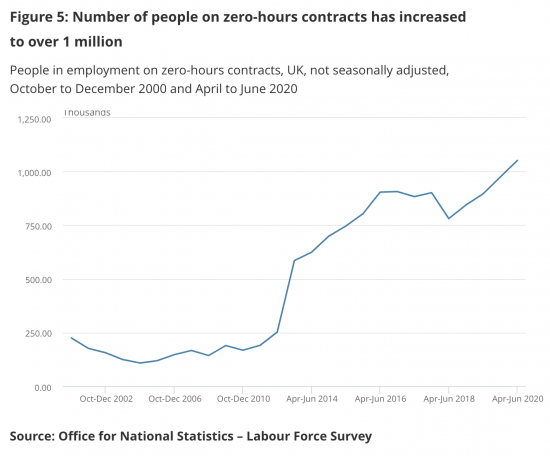 So what is happening in the totals?

The obvious answer is that the rea;l total for unemployment now comfortably exceeds 2.2 million, but by how much we cannot be sure.

What worries me is that in that case talk of the total likely to be not much more than 3 million represents a failure to plan for what is clearly coming our way. And that's recklessly irresponsible.