The Bank of England’s forecasts continue to look hopelessly optimistic

I am struggling with this morning’s Bank of England (BoE) Monetary Policy Committee (MPC) report. There are a number of reasons.

One is that I find it intensely annoying when a report presents all its key findings in percentage terms. Hw is someone meant to know what 7.5% unemployment means when nowhere is data provided to give it a meaning? Economists who resort to such reporting are, in my opinion, always trying to hide something.

And then there is this table of assumptions, few of such strike me as plausible: 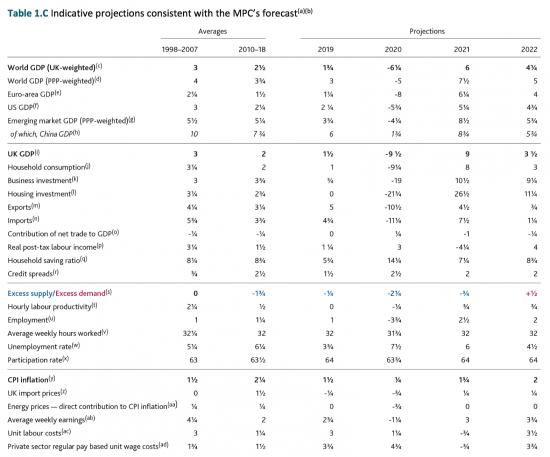 Click the image for a larger version or go to the original report (sorry).

The essence of the MPC's assumptions is;

Let me be honest: I am sure that this land of milk and honey must exist somewhere. But it is not a description of what I think likely to happen in the UK in the next two years or so. And the reasons are very easy to find.

First, the MPC assumes that Covid 19 is under control. Oh, happy days! If only that was true, of course.

Second, and as significantly, it would seem that the MPC thinks that credit is flowing easily to small businesses, and that the risk of corporate failure is low as a result. It would also seem that they think the current credit arrangements for small business will last forever. But that is not true. As I noted very recently, on 30 July the FT reported that:

[T]he OBR assumes that up to 40 per cent of bounce back loans could default. Banking executives warn that the loss rates could be even higher. Thousands of companies face being pursued by their lenders for debts they cannot afford to repay.

And as I noted in response, the companies that this implies might fail might employ between them 6 million people in all, because smaller companies employ disproportionately large numbers of people on lower than average wages with lower than average productivity. As I said at the time:

Not all [those jobs] will be lost, thankfully. I am hopeful that will not be the case. But  to pretend that many hundreds of thousands of small employers will fail and somehow the jobless total will hardly increase at all - which is the view presented by this FT article - is absurd.

In effect the MPC is now making the same claim on unemployment as the FT article. The FT said that despite all the evidence it found on the stress within the economy only 3 million people might become unemployed. The MPC 7.5% unemployment rate implies a figure of around 2.7 million as I extrapolate it. And both suggestions are, unfortunately, unsupported by the evidence.

And they are not replaced immediately.

And I should add that the figures noted do not include those becoming unemployed who were previously self-employed.

The BoE has focussed its work on the wrong issues and has ignored an issue about which most of its members will, I suspect, have very little awareness, which is small business cash flow, which is what will kill the companies that will fail over the coming months and year. The consequence is a forecast that strikes me as utterly implausible in economic terms, and that's before we even take into account the suppressed 'animal spirits'. The BoE found evidence of such suppressed spirits, for example in investment plans, and yet assume that investment will happen anyway.

So why does this mistaken forecasting happen?

One reason is the lack of experience of the real world in places like the BoE.

The second is, of course, political control: the Bank is delivering the 'boosterish' forecast its masters in Number 10 want.

But third, there is something worse. This is that the BoE is staffed by economists for whom maths is king, and they program all their forecasts to predict a return to the mean - because that is what they think mathematically always happens. So what we see here are forecasts which track the quickest possible return to the mean that the Bank's forecasting models permit. And rather than observe conflicts with reality and then adjust for them they continue to publish their model's results.

In fairness, they do say that the downside risks in their forecasts are considerable, and exceed upside risks. That's the one thing they got right.

I fear that things will be much worse than the Bank forecast. But I would be happy to be wrong.