I have argued that there is ample scope to increase the tax paid by those with wealth in the UK. A whole part of the Tax After Coronavirus (TACs) series is based upon that logic. But within the whole Tax After Coronavirus (TACs)  theme that we do not need more taxes at present, overall, but that we do need better ones, is there scope to increase other taxes as well, so that redistribution to those who need more income now, is easier to do? The answer would appear to be that corporation tax also falls into this category.

Tabby Kinder and Emma Agyemang at the Financial Times have considered this issue. They have an explanation as to why corporation tax rates have fallen. It's not just tax avoidance (although that plays a part). The answer is in no small part a fall in rates: 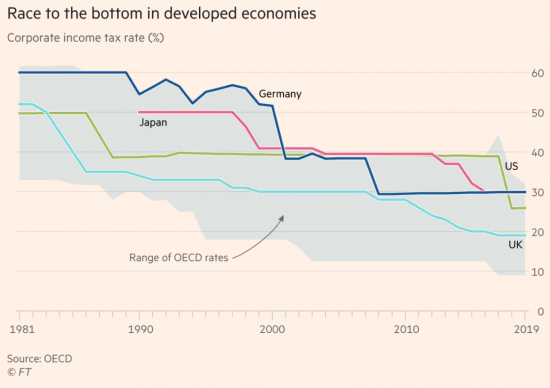 And the impact is clear, the data in this case coming from the USA: 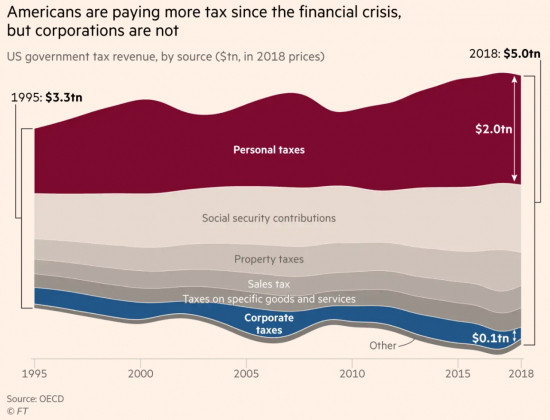 The issue of tax avoidance is real, but the issue on tax rates is as important.

Successive, and successful, corporate lobbying for reduced corporation tax rates has had a massive impact on the tax burden of companies, and most especially the largest multinational corporations.

Is there room for more corporation tax when wages comprise a bit over 60% of GDP and profits a smaller part at around 8% in the USA, but disproportionately the rates of tax on them is widely different, with labour bearing a far larger part, as is apparent.

The reasonable question to ask is why is that? And is that fair?

It would seem that the race to the bottom in corporation tax has resulted in a  fundamental shift in tax burdens from companies onto individuals. Tax After Coronavirus (TACs) has to tackle this issue.