Will the big firms of accountants survive the coronavirus crisis? Don’t count on it

A report by Micahel Kapoor of Bloomberg, published yesterday suggests:

The major U.K. accounting firms could struggle to weather the impact of the pandemic or a big legal claim because they distribute most of their profits to their partners, leaving little money in reserve.

Accounts filed by the U.K. arms of the six biggest firms—the Big Four, BDO LLP and Grant Thornton LLP—show very low levels of equity, in some cases less than a month’s revenue.

They published this table: 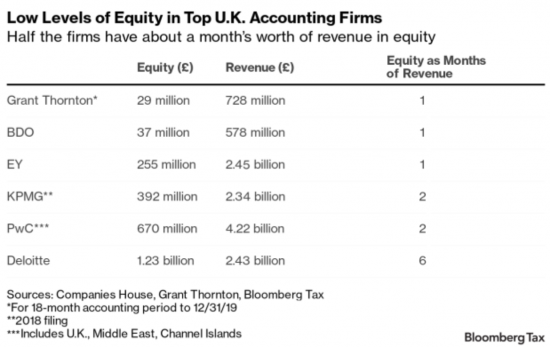 And as they note:

“These are hollowed-out firms,” Richard Murphy, an economics professor at City University and a co-founder of the international group Tax Justice Network, said.

Murphy added that reserves were so low that some of the firms could also struggle to meet expenses from the coronavirus lockdown: EY’s U.K. revenue was 2.5 billion pounds in 2019, for example, meaning that its 255 million pounds of equity translates into little more than a month’s turnover.

“The Big Four have already announced some cuts and the next stage will be layoffs,” Murphy said. “Look at the challenger firms, and they have very little in reserve to cover this sort of event.”

These firms have stripped themselves of money in the pursuit of the goal of owner wealth maximisation. Can they survive? That's a very good question. But have no doubt that whatever happens they face some considerable stress if they are going to do so and I now know of large accounting firms laying even quite senior people off as they come to terms with a new world where there might be less corporate excess.

So too do the accountants.

And only if both happen will really get the corporate reform that we need.

We live in interesting times, as the saying goes.