Rising government debt can increase inequality: governments have to be willing to tackle that head on

The FT is worrying about government debt levels this morning. It published this chart: 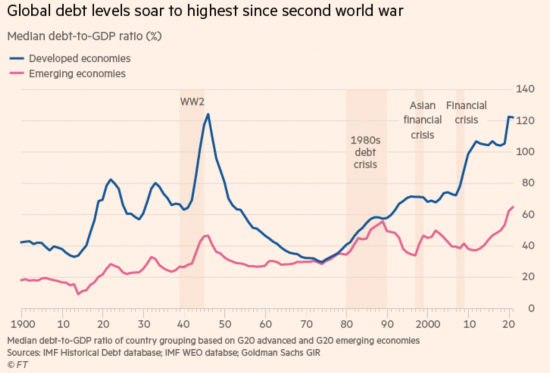 Unprecedented government interventions to offset the economic impact of Covid-19 have driven the level of global debt close to the peaks seen in the second world war, according to Goldman Sachs.

Economists say this raises big questions about how the burden of servicing the debt mountain will be shared; how the related surge in bond issuance will affect markets; and what the long-term impact on growth will be.

But they do add:

In recent years, several economists — among them Atif Mian, Ludwig Straub and Amir Sufi — have argued that financial crises are not the only risk posed by high levels of debt, relative to GDP. Huge debts are also a drag on economic growth, because borrowers who pay the interest and the lenders who collect it use their money differently.

I have to say that this is hardly economic rocket science but at least the FT has noticed. They added:

Borrowers tend to be less wealthy, so when they receive an incremental dollar, they tend to spend it. This creates demand, and stimulates investment to meet that demand. Lenders are generally the wealthy, or governments of countries with excess savings such as Germany and China. Such lenders tend to save dollars they receive — adding to the global savings glut, rather than stimulating demand or investment. This has the effect of driving down interest rates, which encourages yet more borrowing. And so the cycle continues: debt rising, demand dwindling and growth falling.

There are, of course, numerous things that can be done about this.

First, income from wealth needs to be taxed much more. I have been writing about this in the Tax After Coronavirus (TACs) series. The reason for doing so is not to raise revenue: revenue-raising is never the reason to tax. Rather it is to redistribute this income - and tackle the exact problem that the FT identifies.

Second, intervention to keep interest rates as low as possible has to happen. This will require more QE, amongst other measures.

Third, the borrowing relationship needs to be eliminated: government needs to take direct action in the economy without using tax (which suppresses economic activity, which we definitely will not want) or borrowing, which has the unfortunate effects noted. So direct money funding for investment is required. That's Green QE, of course, which I last wrote about here and which probably needs updating now.

I welcome the fact that the FT see that the problem with rising debt is not the debt, as such, but the distributional consequences. Next, it needs to realise that there's are ways of tackling this.