The scale of this crisis is unprecedented: now we need the radical thinking to address it

The scale of this crisis is unprecedented. The downturn in economic activity in April was 20.4% according to the Office for National Statistics: 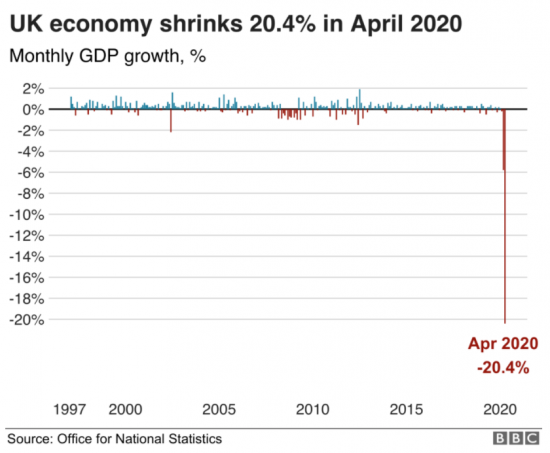 Of course this is likely to be temporary. As a matter of fact, pandemics do always end, if not well. There will, then, be an eventual recovery from this position. But, to pretend that this will be any time soon is naive, in the extreme. As I have said since mid-March, and long before the government did, the economic costs of this pandemic are going to be substantial, and long-term.

That is because the above noted chart does not show the loss of capital in vast numbers of small businesses, in particular, in the UK. Their chances of successfully reopening at their previous scale when the pandemic is over are, in many cases exceptionally limited. That is firstly because of the haemorrhaging of cash that has happened within them during the course of the pandemic despite government assistance. And secondly it is because of the additional costs imposed upon them when they do try to reopen as a result of social distancing and other measures.

In that case we are not going to get a V-shaped recovery, with a quick bounceback. We are, instead, going to see a fundamental change in the level of economic activity for some time to come. That is precisely why I do think radical thinking, including a Green New Deal and the processes of change implicit within it, is necessary now. It is why I also think we need to radically rethink our relationship with what is supposedly called government debt, which is why I have issued a myth buster on that issue this morning.

And yet many on the left seem to have no understanding on this. For them affordability is constrained. And debt repayment remains paramount. One of the reasons why I felt down in the last week was the consequence of exchanges with supposed progressive economists a week or so ago.

They were vehemently anti-MMT. This now appears to be a necessary sign of virility or acceptability in the left of centre think tank world. John Weeks appeared quite without shame in calling MMT a cult on Twitter yesterday.

The economists in question suggested that the public were right to be worried about debt, and that the goal should be to constrain it. There were issues of ‘sound finance’ involved, one said. Another described the ‘moral dimension‘ to  debt and suggested it a sign of failure. These narratives play straight into the hands of the right. It is as if they wished for austerity.

My belief that their comprehension of what debt really is, what it does, what its benefits are, and what it can do to deliver the economic transformation we require are exceptionally limited. But, I stress, these are people from the left, and I see the same attitudes in just about every left of centre think tank right now.

For example, the chief economist of one argued with me for some time very recently that 'we must repay the debt'. Nothing I could say persuaded them otherwise.

I noted the chief economist of another left of centre think tank liking the deeply anti-MMT comments by Jo Michell and John Weeks in my profoundly worrying Twitter exchanges with them yesterday, where their interest in Keynesian point scoring clearly outweighed any interest in addressing issues. Their anti-MMT comments were also liked by James Meadway, so recently of Labour, and supposedly deeply embedded in left of centre thinking at Novara Media.

Not to put too fine a point on it, we’re in the biggest economic crisis of a lifetime, and maybe even centuries, and what the economists on the left want to do right now is talk about how we repay debt, or how they’ve always known tax does not fund all government spending but that makes no difference to policy, or to argue whether money is endogenous or exogenous, rather than discuss how the ability of government to create money without also creating inflation might solve the crisis we’re in and save millions of jobs.

I frequently portray the right as our problem, and there is good reason for that. But candidly, the impoverished, and debt obsessed thinking of much of the supposed left is at least as problematic now.

I know they’ll say they’re Keynesians. But so deep is their paranoia about debt that their language alone will constrain possibility, whilst their desire to limit debt will result in a demand for deeply destructive tax increases that will suck the life out of a recovering economy.

Many who comment on this site despair of Labour. The people I talk to are the people Labour listen to on economics. And they almost all think debt is the big issue to worry about. I am struggling to think of a UK left of centre think tank where the anti-MMT view is not strong right now, and where the desire for debt curtailment / repayment  is not an issue for their economics team. And that may be an even bigger problem than the right at present.