Mythbusters: there’s been no corporate tax cut in the UK

Dan Neidle is a corporate tax lawyer. I am told he tweeted this today (I can't tell, because he's blocked me): 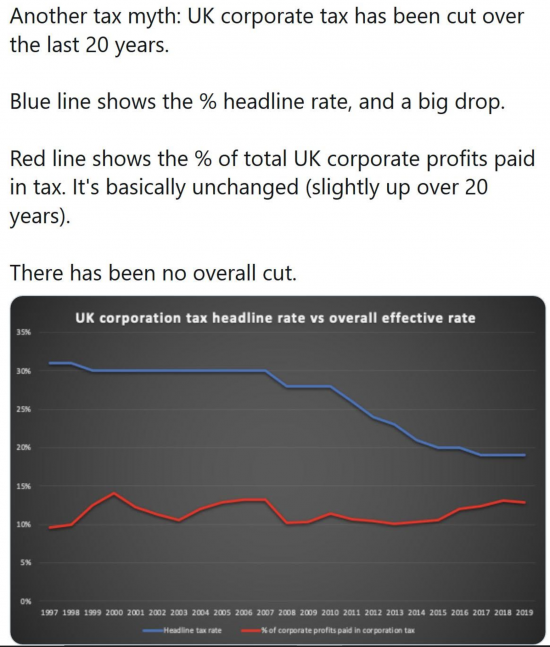 It's only true that the rate of corporation tax paid in the UK has flatlined in proportion to profits if you completely ignore the fact that there are now three times more small companies in the UK than there were in 2000 - and they tend to pay higher proportions of their income in tax while their tax rate has hardly changed over the period.

The UK corporation tax rate has moved like this since 2000: 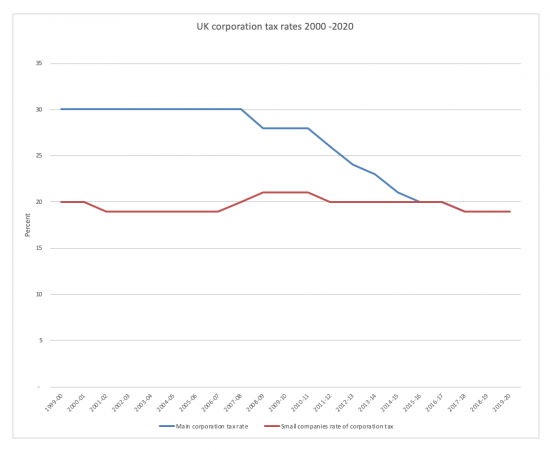 The number of companies in the UK has risen dramatically since 2000: 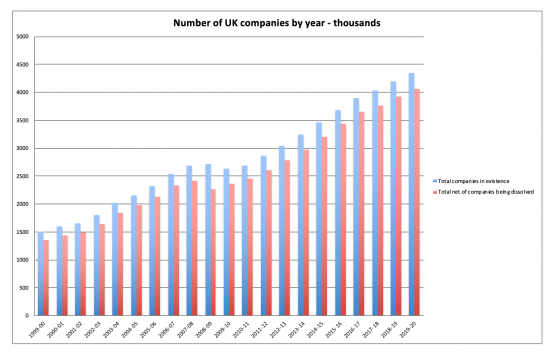 Data is all from Companies House, collected over many years. The number of companies has effectively tripled from 1.5 million to nearly 4.5 million in twenty years.

To put that in context the number of people for each company in the UK has fallen dramatically over the last twenty years: 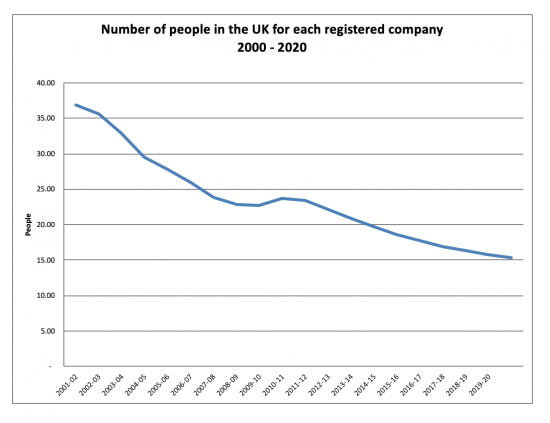 Population data was obtained from the Office for National Statistics.

In proportion to GDP each company could, if all GDP was attributable to corporate activity, have undertaken less of GDP in constant 2020 prices as a result: 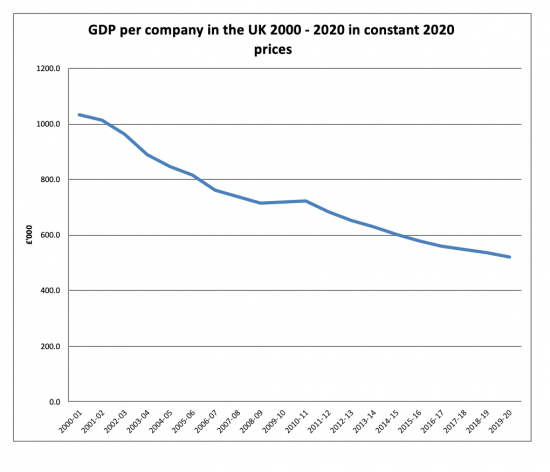 Each company may be smaller as a consequence: indeed, on average all most have been small, on average, based on this data. GDP data came from the Office for Budget Responsibility.

The amount of corporation tax paid by each company fell over the period in both original and 2020 prices: 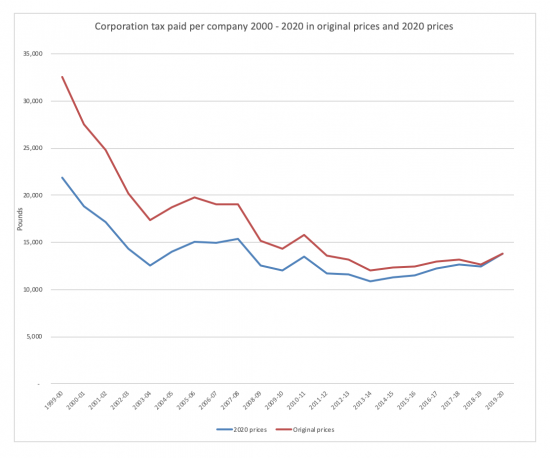 The decline per company was heavy until about 213 and then flatlined - just as rates were.

I had previously examined this trend in 2014 and found this data: 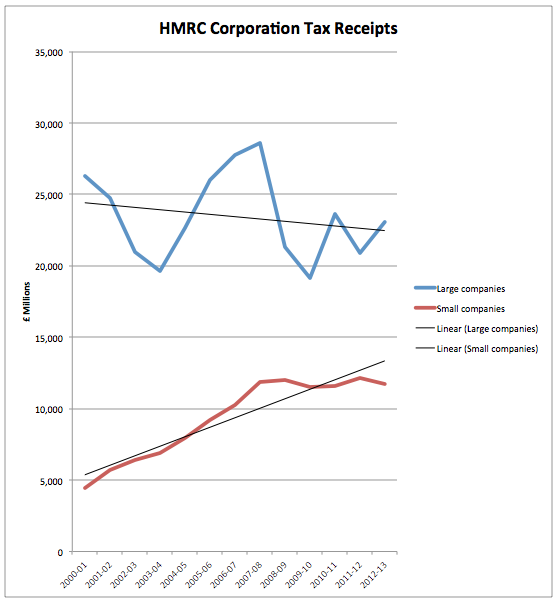 The apparent flatline in corporation tax paid as a proportion of profit does, then, result in the main from the considerable growth in the rise of the number of smaller companies in the UK massively distorting the data in their favour - and they have, indeed flatlined, as has their corporation tax rate.

The claimed conclusion is then the result of comparing data sources that are not comparable and not because of facts in the underlying data.

The real issue is quite different, and is what sum in income tax was lost because profits were diverted into corporation tax? And how much national insurance was lost on dividends paid to avoid that tax?

This myth sought answers to a question that was inappropriately posed.

It’s been put to me that this was not my best ever blog post. In fairness, I am going to agree: it wasn’t.

First, an apology. Dan Neidle had not blocked me. I had muted him, which is something I almost never do. I had good reason to feel indifferent to his offerings, and maybe I should have stuck to them. But he had not blocked me. The lesson is learned: I’ll stick to my decision on such things.

Second, let’s be clear that Neidle only essentially argued with my reliance on a piece of work I had already noted I had not updated. I accept, maybe I should have updated that as well. But I rushed, having been asked to do a favour by writing this. The lesson is learned: don’t rush.

That said Neidle claimed that he did extend my data. For the record, he didn’t. He used a different time series. I do not think they’re the same data. He should have reworked from scratch. Even then, the split between large and small companies is no longer available as the distinction has disappeared. I am not as convinced by his argument as he is.

And, peripherally, Neidle dismissed all claims re small companies by saying the IFS had only found £1 billion extra tax a year from these new small entities incorporating. That makes £1,000 each, approximately. I have not investigated the claim. But it seems wildly implausible. HMRC estimate the cost of small company incorporation net of the corporation tax that they pay at several times that sum. To expect that many small contracting companies pay £10,000 of corporation tax a year is also entirely reasonable or it would not be worth their while incorporating. That would, then, explain a significant part of the increase in tax paid outside banks in recent years. It’s part of the reason why I suggest his data interpretations may be wrong. Much more work is needed on this to get it right.

Third, for reasons that are very hard to fathom Neidle seems to have included bank levies in the corporation tax take but they are not corporation tax, per se. That overstates his yield.

Fourth, Neidle used the ONS measure of corporate profits as his base for comparing tax payments to. And that makes no sense at all. This is a macroeconomic measure and not an accounting one. It is simply not suitable as an indicator of the profits on which corporation tax is paid, and is a real case of comparing apples and oranges. The two measure quite different things. The indicator has also changed over time, not least (as I believe I am right in recalling) with regard to how the profits of single person companies are viewed in the macro accounts. The claim made is inappropriate in that case without quite a lot of reworking to deliver consistency.

Fifth, Neidle also ignores deferred tax and changing tax bases. So, as my 2008 research for the TUC shorted, deferred tax owing skyrocketed in the period 2000 to 2008. Generous capital allowances, in particular, increased these balances. And then as the impact or recession and the changes in capital allowance rules impacted these deferred tax balances reversed, and in fact deferred tax assets became considerably more common as tax was being paid upfront. But Neidle ignores this and yet it may well explain most of the smoothed flow over time - precisely because that is what deferred tax accounting is intended to do.

And sixth, Neidle does still ignores the fact that for about 97% of companies the tax rate hardly varied over the period.

So do I agree his claim? No.

Do I regret engaging? Yes.

Will I do so again with a person only really interested in ad hominem attacks? No.

But should I have taken more time? Yes, because his claim really does look very wrong.