An end to the polarisation of populism?

I do, of course, know that this is the summary of just one opinion poll, and that it was published in the Daily Mail: 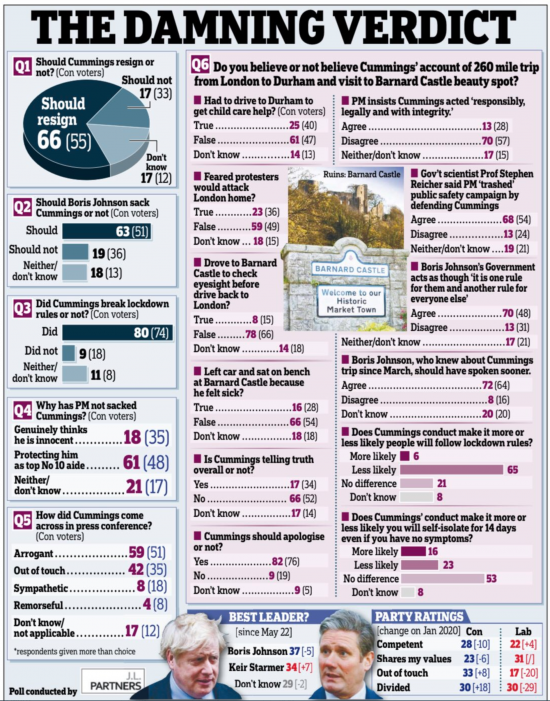 Just as this is one opinion, published in an FT editorial:

The foundation of this UK government is a bunker of close allies surrounded by a lightweight, supine and largely ineffectual cabinet chosen mainly for their commitment to Brexit or their loyalty to Mr Johnson in last year’s Conservative party leadership contest.

But both indicate, from differing perspectives, a common theme. That theme is, of course, political, but at the same time it is not party political. What is being seen is not, as such, a change of mind with regard to policy: rather, it is the collapse of political populism that is being revealed to be little more than a stream of slogans, each of little or no substance.

As Marina Hyde put it, from another angle, in The Guardian:

Part of what’s disturbing was the vignette of a Britain Cummings himself did much to foment: grimly polarised, reflexively aggressive and running with an undercurrent of menace. His crowning triumph — the successful campaign to leave the EU — was a masterclass of stoking and exploiting divisions, unpleasantly emotive half-truths or untruths, and evidently considered itself above the law.

I think it is this that is now being rejected.

Of course, not everyone will agree. Johnson clearly will not. But then Johnson has now been revealed, even by commentators within his own party, as a man unable to govern on his own account, and who is utterly dependent upon Cummings.

Johnson is a pragmatist (which is not a crime), but also a man without political conviction or even thought who sought office for reasons of vanity and aggrandisement alone. Those are crimes against politics. And it has left us exposed to Cummings, a man very clearly devoid of principle, but possessed of supreme arrogance matched only by his contempt for others. The result is a poisoned mix.

It is not party political to say so: the manner in which Labour was run by a group around Corbyn, who also failed to convince anyone that he was in charge and who damaged his own party as a result, makes that clear.

Rather this is a matter of a British desire for competent government that they have been denied for too long. Last December's election was between two pretty awful choices as far as most people were concerned, and Johnson won purely on popularity stakes. But that majority is not, in that case, an indication of substantial political support. That is already melting away. Instead it was simply a matter of what many thought the worst-case option.

Where from here? It's hard to say. But I think we might see the beginning of the end of the polarisation of UK politics as a result of populism in what is happening.

What I hope is that we see the re-polarisation of politics around policy as a result. That would be to our great advantage.