This is the third in my audio series on money. It explains how government spending is funded - and how this always involves the creation of new government-backed money. A transcript is to be found below the audio link.

Understanding how the government funds its activities is vital if the role of money in the economy is to also be understood.

Critically, it has to be remembered that government does not function like a household. When it wishes to spend it simply decides to do so. The decision making is embedded in its budget process, which is how it commits itself to a plan of financial action.

Once it has committed to this plan the government does not need to check whether it has financial resources available to enable it so spend. A government that has its own central bank and which is the currency creator for its jurisdiction knows it can always require that the money that is needed for it to spend can be created on demand. It simply makes the promise to pay and the spend can follow on from that: the central bank, which is the Bank of England in the case of the UK,  will make payment as instructed knowing that the government's promise to pay can always be fulfilled.

That said,  actual expenditure that a government undertakes is incurred through its various Departments. They, like the government as a whole, will commit funds in accordance with their budget. They will then make settlement of the liabilities owing through their clearing bank arrangements. However, the funds expended through these clearing banks will be supplied through the Bank of England.

The Bank of England will provide these funds in the way that every other bank does when advancing money: the Bank of England  makes a charge to the loan account it has with the government and provides credit to the clearing bank to which it has been instructed to make payment. This is a completely normal banking arrangement which the Bank of England has confirmed routinely happens.

However, equally routinely, in the United Kingdom at least, the resulting government overdraft with the Bank of England is cleared, at least once a week, and more often if necessary.  Excluding very short term arrangements there are four ways to achieve this.

Firstly, tax revenue collected by HM Revenue & Customs can be used to clear some or all of this overdraft.

Secondly, the Treasury can sell bonds to the financial markets and use the proceeds of sale to clear the overdraft.

Thirdly, as was commonplace until 2008, and is now scheduled to happen again from 2020 onwards, the overdraft can be left in place, being described then as the Ways and Means Account. This process is called direct monetary funding (DMF) of government spending by central banks.

Fourthly, and in some ways the most complicated arrangement, is what is called quantitative easing or QE. In this arrangement the government sells bonds, but the Bank of England then creates new funds by making a loan to a company that it owns to buy those bonds back from the financial institutions that have bought them from the government.

Second, in practice the Bank has, to date, required that some of the cash created by the quantitative easing process be held by the U.K.'s clearing banks with it on what are called central bank reserves accounts. The clearing banks then use these central bank reserve accounts to make settlement with each other when, since 2008 they have not been willing to do so without this arrangement because they do not trust each other to be solvent. This process of central bank reserve accounting gives the Bank of England control over short-term interest rates, which are now largely determined by the rate paid on these accounts.

Add these arrangements together and government spending is funded by a combination of tax, bond issues, money creation through the government overdraft with the Bank of England and quantitative easing. All, however, are reflections of the fact that all government spending injects money into the economy at some point and the process of tax collection, bond sales and (in effect) central bank reserve creation all at some point take it out of circulation again.

Government spending always creates money: the question is how to cancel the inflationary effect of that. And critically, there are now multiple options to achieve that goal. The idea that government spending is funded by taxation is, then, part of history.

The following diagram may help some explore this issue in another way: 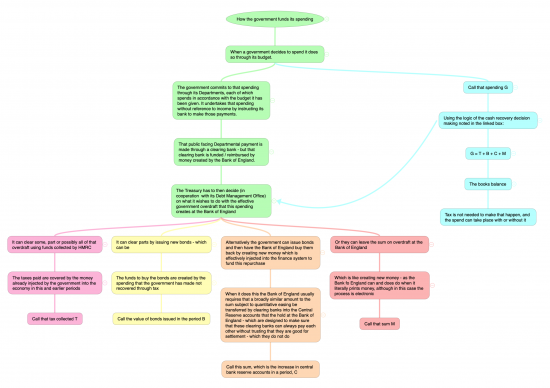 A larger version of this diagram is available here. Alternatively, enlarge your view using Cmd+.