£55 billion of NHS PFI debt has not been written off: with so much else that now needs to be reformed if the NHS is to serve us into the future

The government supposedly wrote off £13.4 billion of NHS debt yesterday. It didn't: as I have already pointed out, all it did was make a book-keeping adjustment. What it actually did was allow NHS Trusts to record the sums they had spent for the populations they served as having been funded by central government when previously the government were claiming they had overspent.

It's worth noting in that case why the government claimed that they were overspent. I wrote this in 2018: 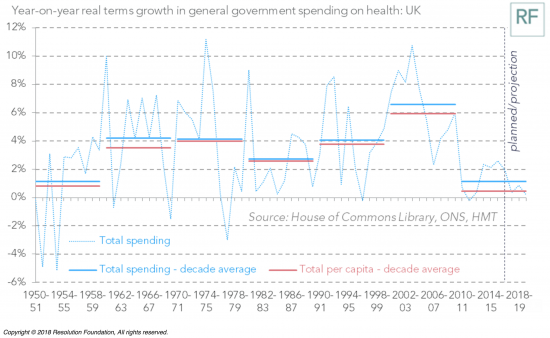 As the chart makes clear, that's the lowest spending increase since the 50s. No wonder the NHS is in crisis. And no wonder some of us say that's entirely by choice.

The debts that have now, supposedly, been written off were simply an indication that NHS Trusts had not been given enough to do the job being asked of them. That debt write off is not, then, largesse on the government's part: it is a tacit recognition that under Jeremy Hunt the NHS was chronically mismanaged by the Tories.

But there is another question to ask, which is whether this is all NHS debt. And the answer is, of course, that it is no. I have checked the government publication on the write-off. This says, after all the political nonsense is got through that:

There are five points to make. The first is that elsewhere in the release it is noted that:

While many NHS trusts manage strong finances, under the existing rules, some took out loans to plug financial gaps in their day-to-day (revenue) or capital (infrastructure) budgets.

In other words, they were underfunded.

Second, the charge of interest to Trusts that were struggling to provide NHS services was always intended to, and actually did, increase health inequality in the UK and there is no hint of an apology for this in the release.

Third, calling this capital now is interesting: the idea that debt is not an instrument of control any more is welcome, but very long overdue.

Fourth, as the last bullet points, this was always about punishing those parts of the NHS that saw high demand - most of which served poorer areas. It was never about a real funding cost. All of this was a sham, in other words. There was no real debt at all.

This package is launched in combination with a simpler internal payment system to help NHS trusts in dealing with the coronavirus (COVID-19) response, which was agreed with NHS England last week.

In other words, it's also been appreciated that the NHS should never have been burdened with the farce of the internal market. It is time that went now.

But there is something that bis most noticeably unsaid in this press release. The biggest burden of debt in the NHS is not from these sham loans from central government. It is from PFI - the private finance initiative. There are maybe £55 billion of PFI loans outstanding, depending on how you count. There is no write off of them, and they too are a crushing burden on the NHS. In some Trusts up to a sixth of all spending is on PFI costs.

Now is the time for three things.

First, the renationalisation of the NHS: there is no longer time for the farce created by the fracturing of the NHS by the so-called internal market. It has simply created burdens that must be swept away now. Integrated care and systems are essential from now on.

Second, the NHS needs proper funding in the future.

And third, PFI debt needs to be bought in and cancelled, for good. This disaster has to be consigned to history now.

Nothing else will do.

Clapping for the NHS is one thing. But sweeping away Tory ecological impositions upon it is what is really required.