The UK does not have national debt of Â£1.8 trillion. Itâ€™s less than Â£1.4 trillion, as their own accounts show. So might journalists stop repeating the government’s lies on this, please?

The Guardian, in an ineffectual review of Tory claims about Labour spending plans, shows its ignorance of UK government accounts by claiming:

A danger for both Labour and Conservatives is that pushing up borrowing could lead to higher interest payments on government debts. Britain pays about £40bn a year to service a debt pile of about £1.8tn (84% of GDP). Adding to that, with higher annual deficits, could make the UK a more risky prospect for international investors, driving up borrowing costs.

There are fundamental problems with this claim.

The glaringly obvious one is that the UK does not have national debt of £1.8 trillion. How do I know? Because the national accounts say so. This is the note on UK government debt from the UK government's own latest accounts: 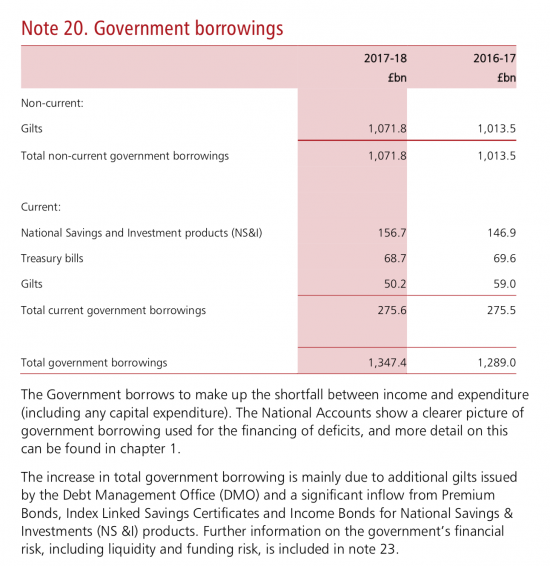 Nothing much has changed since then: the figure will have gone up by £30 billion or s0.

In other words, there is national debt of less than £1.4 trillion. What's the difference? It's quantitative easing, of course. And as the accounts show, and as politicians persistently deny, you cannot owe yourself a debt. So it cannot be claimed that we owe £435 billion of quantitative easing debt when the government owes it to itself, and recognises that fact by not paying interest on it. So why does the Guardian go along with politicians lies on this issue? I wish I could answer that question

Second, as I showed yesterday, only a quarter of UK government debt is owned outside the country. In other words, the pressure brought to bear by overseas markets is small.

And, third, as I have also shown, all future debt demand could be met from the UK, meaning we are not exposed to risk for this reason at all. You cannot be exposed to interest rate risk from overseas if you are borrowing in your own currency from a domestic market. Japan proves that.

And fourth, if there is such risk quantitative easing can be used to tackle it: problem debt could simply be cancelled. Why deny this reality?

Finally, note that there is big demand to save with the government already - £156 billion of savings held with NS&I proves it. This could increase, significantly.

It really is time that the country's journalists stopped supporting the government's lies on debt. We owe vastly less than is claimed. The cost is low - at under 2%. And the capacity to borrow more, in sterling, without any pressure on interest rates is very high. So might we have less fear-mongering please, not least from sources that should know better?