I have commented already on this morning's published Brexit deal. I omitted to mention that it is likely to also be illegal under this legislation: 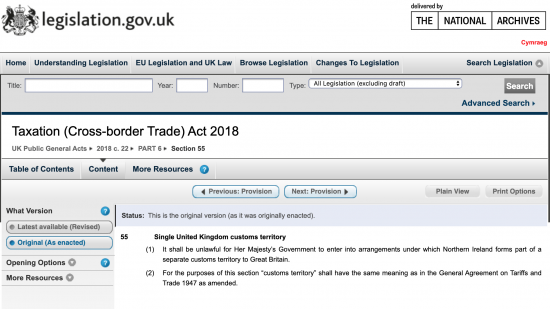 I have checked what subsection 2 means by reference to the GATT agreement. It says:

There is not a shadow of a doubt that under the new Brexit deal Northen Ireland has substantially different tariffs and most especially other regulations for commerce from the UK: it will be in the single market when the rest of the UK is not, for example.   And there will be a customs border between it and the rest of the UK.

Now that 2018 law could be repealed, of course.

But that would acknowledge that the ERG has really sold out.

What will they be saying about it? The reality is that the issue will have to be addressed: the GATT would appear to require it.