Lessons from Brecon and Radnorshire

This was the election result from Brecon and Radnorshire: 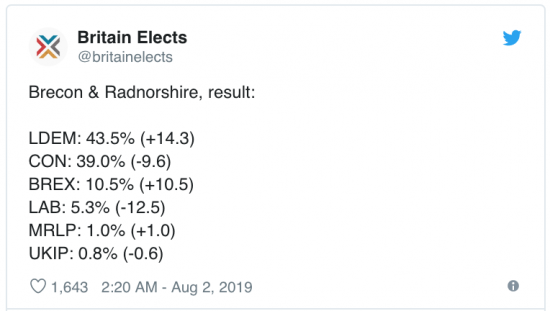 Are there any messages? I think so.

Second, if we generously assume that Labour is a Remain party, the bote splits 48.8% remain, 50.3% Leave. So not much has changed.

Third, Boris was a facto. Wait until fuel prices increase in the next week or so and then see whether that remains the case, because he will be the sole reason for that.

Fourth, strategic alliances work. The Greens and Plaid Cymru played their part in this victory. It may not have happened without them.

Fifth, Labour needs to learn that lesson very rapidly, but won't. Just as it will not decide if it is a Remain party, or not

Sixth, we remain in hung parliament territory. The Boris factor is not big enough to change that. Ad of he could not win this, he never will.

In summary, the country remains as divided as ever and our voting system cannot handle this.