Government debt v climate apocalypse: a battle that can have only one winner

As Zac Carter has noted in The Huffington Post:

He’s right: she didn’t. But I have, over a long period. And I have done so again, in the last couple of days.  My argument is that debt can pay for the Green New Deal. This will be debt that might be funded by pensions and ISAs in the UK because I suggest that the conditions attached to these should be changed to prioritise GND related saving given the importance of the issue. There is good reason for doing so. There is very compelling evidence that most saving in the UK is tax incentivised. Pensions and ISAs completely dominate this market. And I do not think that requiring a GND component in either will change that. The result would be that reforming tax incentives could, as I have shown, mean that the required debt to fund the GND could be raised.

That, then, leaves the question of whether or not debt is the mechanism to deliver this. MMT might argue that paying interest on these loans is unnecessary. But that avoids two issues. One is that these savings will go elsewhere in search of interest in that case: the savings and interest issue is not resolved as neatly as it is by using them for public purpose. And second, the fact is that we know this debt funding will have negligible real cost, whilst simply replicating an existing component in existing savings portfolios.  So why not do it?

That is a question commonly asked in the last few days. I have already noted Simon Wren-Lewis doing so. He is not alone in concluding that debt is the answer, and that when the balance of priorities is saving the planet or balancing the government’s books there is only one answer.

He is not alone. As FT Alphaville noted recently, in a discussion on how the USA has paid for wars, the relative weighting of tax and borrowing has been as follows: 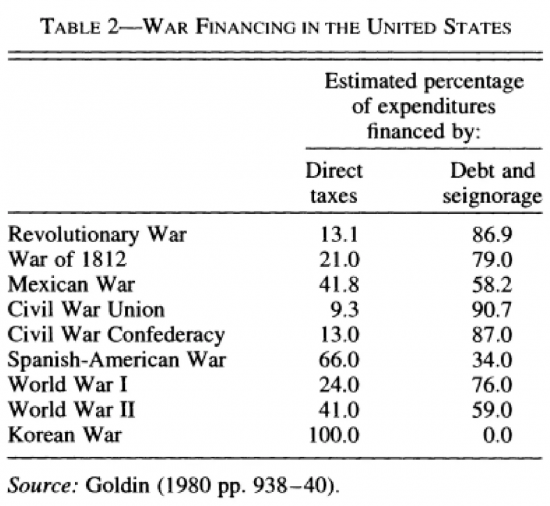 That’s a very heavy weighting to borrowing. And so it will have to be for the GND. If war creates a period of time when a government must spend, come what may, so too does the climate crisis. I have argued tax should be in this mix, most especially by beating tax abuse and closing tax spillover effects that undermine tax systems. But tax cannot do all the lifting here. Something else must, and that will be borrowing. We have no choice about that.

But, as Zac Carter noted, this outrages the right. As he put it:

[A]mong contemporary thinkers, the Green New Deal’s very clear statement of priorities has prompted furious controversy. Noah Smith intonesthat Ocasio-Cortez is calling for “unlimited deficit spending” that will march America into “oblivion.” Steven Rattner accuses Green New Deal advocates of “intergenerational theft.” Marc Thiessen declares that Ocasio-Cortez has proffered “the neo-socialist lie that you can get something for nothing.” Even Paul Krugman is warning against putting forward ambitious new government programs without levying new taxes.

There are hysterics on display here. Saving the planet is intergenerational salvation, and not theft. Whilst no one is saying you can get something for nothing: that's simply absurd. And for the record, as I have noted, tax is in the mix so Krugman is making a fuss over nothing. AOC has said so too. But this will not stop the right: they will argue on a debt basis that the planet cannot be saved. Better a balanced budget than human life on earth, they seem to think. They are wrong. But this is the first battle the Green New Deal must now win.