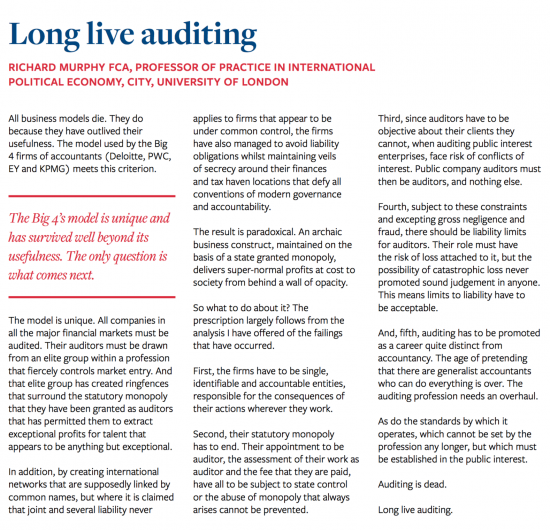 This is the text:

All business models die. They do because they have outlived their usefulness. The model used by the Big 4 firms of accountants (Deloitte, PWC, EY and KPMG) meets this criterion.

The Big 4’s model is unique and has survived well beyond its usefulness. The only question is what comes next.

The model is unique. All companies in all the major financial markets must be audited. Their auditors must be drawn from an elite group within a profession that fiercely controls market entry. And that elite group has created ringfences that surround the statutory monopoly that they have been granted as auditors that has permitted them to extract exceptional profits for talent that appears to be anything but exceptional.

In addition, by creating international networks that are supposedly linked by common names, but where it is claimed that joint and several liability never applies to firms that appear to be under common control, the firms have also managed to avoid liability obligations whilst maintaining veils of secrecy around their finances and tax haven locations that defy all conventions of modern governance and accountability.

The result is paradoxical. An archaic business construct, maintained on the basis of a state granted monopoly, delivers super-normal profits at cost to society from behind a wall of opacity.

So what to do about it? The prescription largely follows from the analysis I have offered of the failings that have occurred.

First, the firms have to be single, identifiable and accountable entities, responsible for the consequences of their actions wherever they work.

Second, their statutory monopoly has to end. Their appointment to be auditor, the assessment of their work as auditor and the fee that they are paid, have all to be subject to state control or the abuse of monopoly that always arises cannot be prevented.

Third, since auditors have to be objective about their clients they cannot, when auditing public interest enterprises, face risk of conflicts of interest. Public company auditors must then be auditors, and nothing else.

Fourth, subject to these constraints and excepting gross negligence and fraud, there should be liability limits for auditors. Their role must have the risk of loss attached to it, but the possibility of catastrophic loss never promoted sound judgement in anyone. This means limits to liability have to be acceptable.

And, fifth, auditing has to be promoted as a career quite distinct from accountancy. The age of pretending that there are generalist accountants who can do everything is over. The auditing profession needs an overhaul.

As do the standards by which it operates, which cannot be set by the profession any longer, but which must be established in the public interest.