It looks like Jersey is failing an EU imposed tax test, yet again

As I outlined last December, the European Union's decision to put Jersey, Guernsey and the Isle of Man on what was, in effect, their tax haven grey list was very bad news for these places. As I noted then, the EU reasoning was as follows:

The explanatory note to this listing said:

And as I said at the time:

The EU Code of Conduct Group has given itself the right to decide whether, on a broader construction which no doubt considers both outcomes as well as legislation, these places are putting into place regimes that do encourage artificial relocation of profits.

I confirm that they do just that. ... Corporate profits make up 67% of the GDP of the Isle of Man. For comparison, they make up 21% of the profit of the United Kingdom, which might reasonably be used as a benchmark. Jersey and Guernsey are similarly abusive, and no doubt Cayman and Bermuda are likewise. Therefore, as a matter of fact, the EU Code of Conduct Group test is failed by each of them: they do provide facilities that do encourage the artificial relocation of profits without the economic substance of the related transactions that give rise to that profit being located in the islands.

The Code of Conduct Group has, then, set up a test which these islands do, as a matter of fact, fail. And the reason why they fail is inherent in the tax system that they put in place by 2012 to get round the original requirements that the Code of Conduct Group expected them to comply with in 1997. Way back then that Group made clear that differential tax rates to encourage the artificial relocation of profits were not acceptable. What they presumed would happen was that there would be a levelling up of rates: they did not expect the levelling down that actually took place. But what they are now clearly indicating is that the continuing abuse justifies further action.

Now Jersey has published its proposal as to how this will be dealt with. This is, in my opinion the key clause: 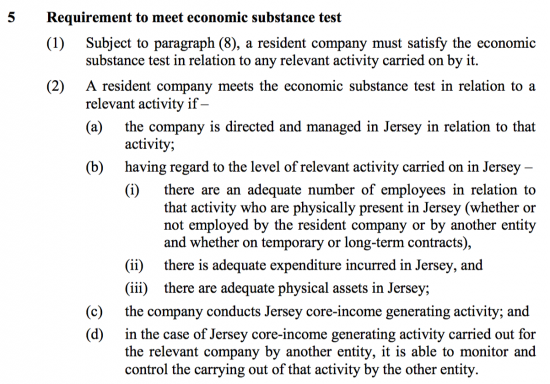 I have bad news for Jersey. This is really not going to work. There are two fundamental reasons for thinking so.

The first clue is in the first line of paragraph 5(1). This provision only applies to Jersey resident companies. As I noted in December that is about 13% of Jersey companies. The rest are non-resident. Jersey asks nothing about those companies and so has no data to share on them under automatic information sharing regimes. And that is precisely what the EU is worried about. The supposedly resident companies do, of course, create tax problems and artificiality has been rife amongst that population. But the big tax haven problem is that there are very large numbers of Jersey companies about which nothing is known at all. The EU wants to know about them. Jersey is doing nothing at all to address that issue with this proposal. The result is that as I noted last December:

The EU has demanded that they prove that they do not facilitate the recording of profits to which no local economic substance can be attached but Jersey has no clue what profits are associated with the Island and so it has no starting point to answer the question. And that is because:

Secondly, as I also predicted last December, even with regard to resident companies I suggest the measures will fail. This is because I think Jersey has completely missed the point of the EU requirement. The test is not just that there is economic substance in what happens in Jersey, although that is important. It is also that this does not artificially induce the relocation of profit. So proving you do something, which is what Jersey is seekingbthat it’s suppisedky resident companies do, is not enough. They must not also make disproportionate profit in an apparent attempt to secure a tax advantage. I said last December that this would require much more radical reform than Je set is apparently considering:

I would suggest that a total reform of the corporation tax systems has to be on the cards. Firstly, they will be expected to have a corporation tax. Second, this tax will be expected to be set at a rate that does not encourage the relocation of profits. Third, as a benchmark for what that rate might be I strongly suspect that the Code of Conduct Group will look at comparable income tax rates on the island, which are 20% in each case. Anything significantly different from this will, I suspect, require some tortuous explanation.

As a result I predict that this latest attempt will not in anyway satisfy the EU. I predict that Jersey is still  in deep trouble. And if it is not, then the EU initiative is coming to nothing. But Jersey should take note: they are well aware that I have form in this area and have always tended to call these things right when they get them wrong.