Jersey’s days as a tax haven are very definitely numbered

The EU's new tax haven black list published last week, had, as I've noted before, an interesting ' grey list'  attached to it.  Included in the grey list were  the UK's Crown Dependencies and some of its Overseas Territories as a result of this comment:

I have already offered some detailed commentary on the consequences, but this blog elaborates those concerns, with evidential support. That  evidence comes from Jersey as a consequence of questions asked  of the Chief Minister of Island by  States of Jersey Deputy Geoff Southern,  quite coincidentally,  in September and December this year.

This blog is in four parts. The first assembles the data from the questions Geoff Southern asked. The second assesses that data and suggests its consequences. In the third part I lay out some of the challenges this gives rise to. Fourthly, I suggest the questions that Jersey needs to address now. Finally I suggest what this might mean for the Island.

It is my belief that very similar questions could be asked of all the other jurisdictions noted in the grey list. I would add that because that is my belief I will be sharing this blog post with the Director General for Taxation and the Customs Union in the European Union.

Because the issue I am discussing is of such significance I make no apology for the length of this post. The challenge that the EU has put to the Crown Dependencies and Overseas Territories is significant: an evidence based approach to addressing it is required and this blog starts to set out a way in which this might be done.

Geoff Southern's main question of interest was raised in December 2017  (number 632), after the release of the EU black list, and asked:

The purpose of his question was,  I think, to discover whether the conditions that had eventually led to Jersey having its tax system approved by the EU Code of Conduct Group on Business Taxation still persist. This is implicit in the first part of the question. The answer was about as vague as could be:

Much of the answer to the second part of the question appeared to be  obfuscation until this was said:

Part three to the answer also provided little in the way of clarity :

Whilst in conclusion the answer said:

Which is tantamount to an admission that nothing at all is known about the 11,000 foreign companies managed in the Island right now.

It is fair to say that the information  provided is not a model of clarity. Written question 504 from September 2017 adds some elaboration: 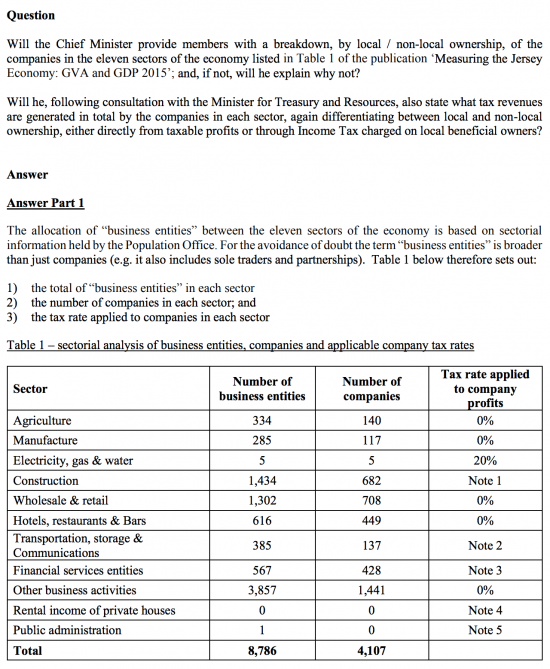 These companies apparently paid this tax:

And it was reported that:

Assessment of the available data

It is important to note that the EU Code of Conduct relates to business taxation, which is  interpreted as meaning tax on company profits.  That is why  company data is critical to the issues being addressed to. 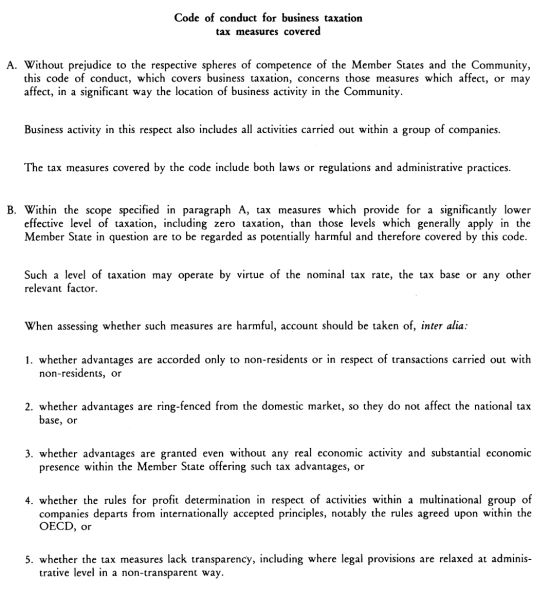 That I am aware of this still remains true. As assessment criteria go they're useful.

The information provided in December suggests that:

This data implies that:

This last point is significant in the context of total Jersey tax revenues: 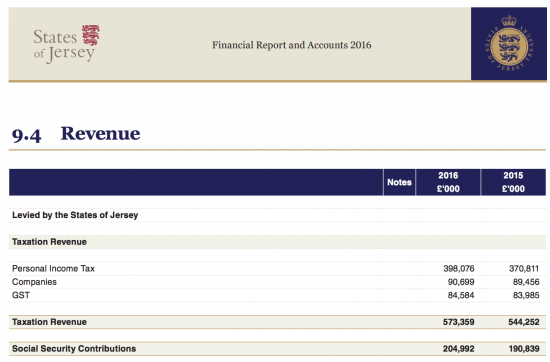 The issues this data gives rise to

There are significant implications arising from this data.

First, it implies Jersey has no real idea what its real GDP might be because it has no idea what the vast majority of the economic activity linked to the Island is.  This is why it, admittedly, focuses its own attention on estimating its Gross Value Added because the truth is it simply cannot estimate GDP as it has not got the data to do so. The difference may be colossal. In Ireland GNI may be 26% less than GDP because of flows that do not actually relate to Irish activity: in Jersey it may be much higher.

Second, this implies that Jersey has no real idea what proportion of profits recorded in Jersey by companies have any real relationship to the Island.

Third,  what this then means that Jersey cannot really know whether the profits it thinks are appropriately declared as arising in Jersey are the right ones or not because it permits Jersey related companies to make no declaration at all, at their own discretion, and some are bound to abuse this.

Fourth, that then means Jersey can have no real clue as to whether the correct tax is collected in the Island, or not, because it simply does not know what the true potential tax abuse of the Island might be.

Fifth, this has serious ramifications for Jersey’s international obligations with regard to tax because it clearly implies that the Jersey tax authorities do not know where else in  the world Jersey companies should be declaring tax because it does not make enquiry of them to find out.

Sixth, that then means that Jersey does not have the information to share with those places might have the legal right to tax those profits, which means that it is failing in all the commitments it has made to effective tax information exchange.

Seventh, and of greatest relevance of all at this moment, taken together these facts mean that Jersey simply cannot answer allegations that profits might be artificially relocated to the Island without associated economic substance because it just does not have the data to know the answer to that question.

The challenges this data gives rise to

These conclusions appear indisputable. It is hard to see how the data Jersey has provided lets any other conclusions be reached. And because Jersey has never made enquiry of most of the companies associated with the Island it cannot provide alternative data to refute them. But this now presents Jersey (and any of the other places grey listed for similar reason that hold no more data than Jersey does) with a near insoluble problem. The EU has demanded that they prove that they do not facilitate the recording of profits to which no local economic substance can be attached but Jersey has no clue what profits are associated with the Island and so it has no starting point to answer the question. And that is because:

What Jersey needs to do now

Jersey, and quite probably the other locations involved, now need to address the issues that this data gives rise to. I would suggest that first it would seem that Jersey has to agree that it does not have the data that the EU will require that it supply to address the challenge it has to address.

Second, Jersey has to suggest how it will secure the data it now requires and what it will do if it is unable to secure it, as would seem entirely possible.

Third, it has to, for the sake of all companies that use the Island and all those who are dependent upon them doing so within its economy (which is approximately 50% dependent upon the financial services industry) say what plan it has to resolve this issue in 2018.

Fourth, it has to spell out the future of the zero / ten tax policy, which the EU Code of Conduct Group on Business Taxation now appears to be signalling is unacceptable to them.

Fifth, it has to say what reforms it is proposing in that case. Since businesses always say that two of the great attraction of the Island are its stability and certainty it has to suggest what these reforms might be at the first possible opportunity or those qualities are lost.

What is clear is that the EU is insisting on change, and based on past precedent it will secure it from Jersey. But in that case the information Jersey must demand from companies associated with it is bound to alter fundamentally and that might, in turn, fundamentally change the way it is expected to tax them.

In fairness, it is appropriate to note that the Chief Minister (Senator Ian Gorst) did make a statement on these issues last week. He said all the usual puff about Jersey being fully compliant with all standards asked of it and then added: 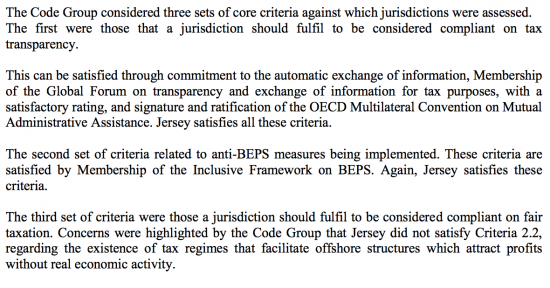 The last is the key issue of course, and relates to the Code Group's 1997 standards. This is where Jersey failed. In response he said: 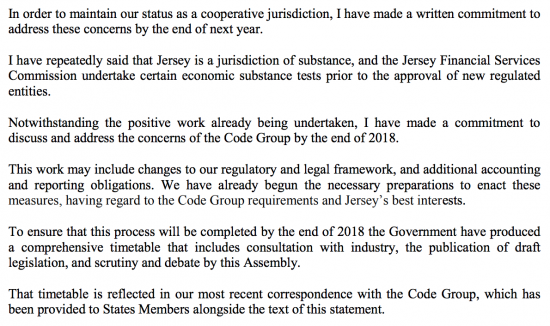 I am sure that the Chief Minister has his own opinion on what is required but my suggestions are that Jersey (and the other places impacted on the grey list) will now, at a minimum, be expected to:

a) Require that all companies incorporated in or associated with the Island  by way of a permanent establishment file a set of accounts and tax return with its tax authority annually;

b) That those companies will be presumed to be taxable in Jersey in all cases unless they can evidence that they have declared their profits to another tax authority and have either been or will be assessed to tax in another place on the resulting income;

The implications for Jersey

The changes that these three suggestions will make to Jersey are dramatic.  First of all, Jersey will no longer be able to ignore the activities of companies incorporated by it which claim to trade in other locations as a result of which Jersey asked the no information from them.  Instead it will have to:

1).  Collect accounts and tax returns from them;

2).  Determine whether or not they are really tax resident elsewhere;

3). Exchange  the resulting data with the places where they claim to be resident, whether that is true or not;

4).  Assist those other places in recovering the tax owing to them if they cannot secure it directly;

5). Have to tax those companies locally.

In other words,  Jersey will cease to be a location where 87% of companies can trade anonymously, and without account for their actions to any tax authority, anywhere.  Not to be too unsubtle about it, this will shatter forever  Jersey as a corporate tax haven. And remember,  this process has to be under way by the end of 2018.

What we will also learn,  at least during a transitional period,  is just how much profit has been relocated in this way.  No  doubt, and in due course,  this practice will be stopped by the changes that will take place.

I should also stress that I believe that these  changes will also be required of  Guernsey, the Isle of Man,  the Cayman Islands,  the Bahamas,  Bermuda,  the British Virgin Islands,  and maybe some other locations in the British Caribbean.  I have long argued that the European Union has been one of the most effective organisations for the delivery of anti-tax haven  measures:  I believe that this latest move will prove that this is the case.

And if in any doubt read between the lines in what the Chief Minister has said. His reference to 'our  regulatory and legal framework and additional accounting and reporting obligations'  does, I think mean something very close to, if not exactly, along the lines that I am suggesting. He  may be trying to put an optimistic spin on this,  but the reality is that Jersey,  and many of the other UK tax havens  may now realise that their days of selling abuse are numbered.  Whatever the weaknesses within the EU Code of Conduct Group on Business Taxation,  and they exist,  we should thank them for this.