Today MPs vote on an amendment to the Sanctions and Anti-Money Laundering Bill that would require the UK to impose a requirement on the UK’s Crown Dependencies and Overseas Territories that they create registers of the beneficial ownership of companies if those places fail to do so of their own free will.

This matters. Most of the time most of what happens in Westminster appears technical, distant and remote. And, let’s be honest, also rather boring because much of what is done is whipped, which means MPs vote as they are told to do by their parties. That provides much of the explanation for the low attendance in the Commons Chamber, I suspect.

But every now and again MPs get a chance to tilt the world on its axis, at least just a little. This is one such chance. Tax haven secrecy is, as I have long argued, deeply corrosive. It undermines fair competition. It creates and reinforces wealth inequality. It undermines the rule of law. It threatens democratic states' ability to tax, which effective management of their economies requires. And it aids illicit activity from sanctions busting to election rigging, crime and trafficking in all its ugly forms.

As a result if the tireless efforts of Margaret Hodge MPs have a chance to shatter this secrecy. And that would send a message to the world. First, it would say that the City of London is only open to honest business, because right now they use the tax havens to route the illicit parts.

Second, it would say the UK is a believer in fair competition.

Third, it would say that we will uphold democracy, the rule of law and the right to tax.

Fourth, it will say cheats should play no part in our society.

That’s why I say:

Will it happen though? The government is fighting a furious rearguard action, but which simply promises action when the rest of the world agrees, which is no promise at all. I hope no one is conned.

For the record this is the amendment that MPs will be asked to vote on, with those supporting it already named on it: 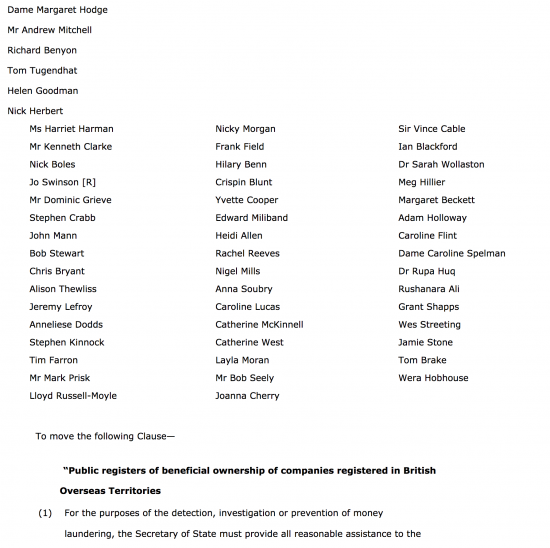 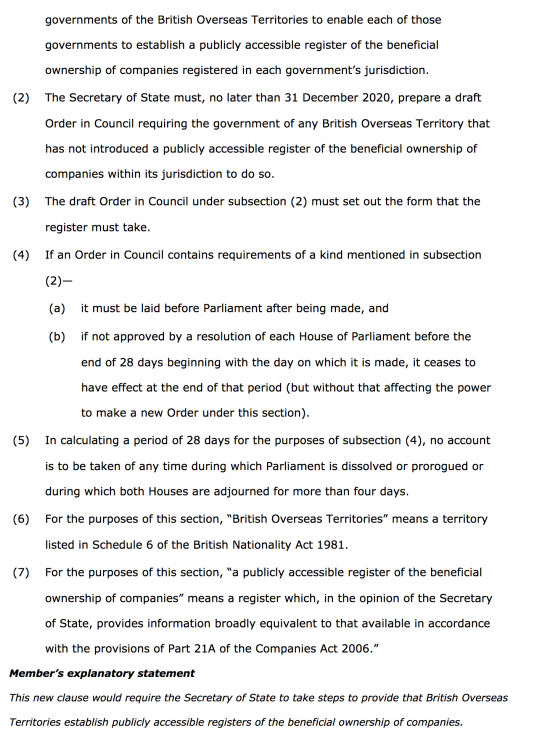 And as a footnote, the last time the Commons was presented with such an opportunity I wrote the clause in question for the late Michael Meacher MP. It was clause 9, here. I have a very real interest in this issue.