The FT admits it: Corbyn is coming

The FT is running a most amusing feature today: 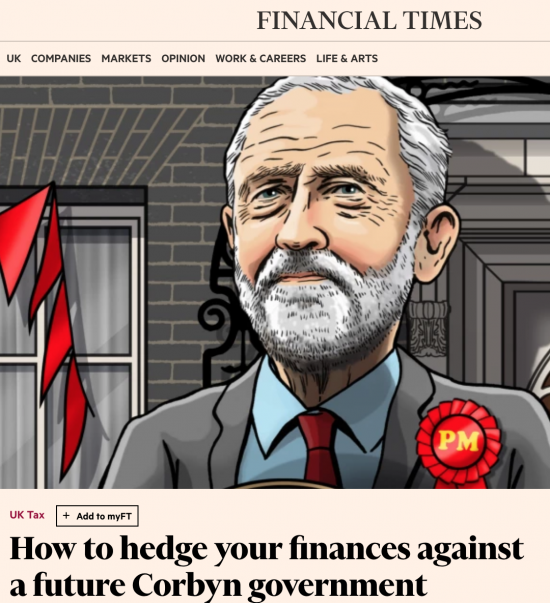 It's amusing because of the hysteria that lies just below the surface within it.

It's amusing because underneath the hysteria the truth is told. Take this, for example:

Capitalism is not working for the under-40s, so they’re voting for socialism.

And this not of reality:

Many will have little option but to pay more [tax]. “In the long term, there is little that can be done to reduce this burden, unless people consciously work less hard, move down the jobs ladder or emigrate”

It's also amusing because it clearly thinks it is addressing a real possibility.

And it's amusing for what it predicts.

Let me look at those things.

They will. And rightly so. Even big business is bemused at the absurdly low rates it is being offered whilst it is sitting on enormous cash piles that they have no idea what to do with, barring lending it to the government. Of course they should pay more.

I sincerely hope so: it is absurd that the highest capital gains tax rate is 28% and that is less than most people pay when NIC is included on their pay. The income tax and national insurance rates should be aligned.

I hope so: I explain why, here.

At the the top end that is appropriate: we have a regressive tax system. It's time that was corrected.

Labour will crack down on tax avoidance

Stamp duty on shares has not stopped London being the epicentre of global financial markets, at cost to the country as a whole. Deal with it.

And then there is some nonsense:

Labour would push down the price of UK gilts

Hang on: that would mean interest rates rose. Isn't that what markets want?

But, haven't you noticed that UK national debt has increased massively since 2008 and this has not happened?

And hasn't the FT noticed QE?

The article is really very confused when it comes to these issues.

Yes, the railways, the NHS and PFI.

And they are all very popular. Just as is Labour's housebuilding pledge. And why? Because they represent efficient use of government money in meeting need.

I think we can conclude that FT readers are only interested in this when it suits their own portfolio's needs, whatever else they might say.

But the best but if all is the simple underlying message - the FT is taking Labour very seriously indeed.