Has Scotland got its new taxes right?

Derek Mackay presented his Scottish budget yesterday and for the first time has suggested Scotland have different tax rates from the rest of the UK. The impact is to raise more than £160 million of new revenues, mainly from the well off, as this table shows: 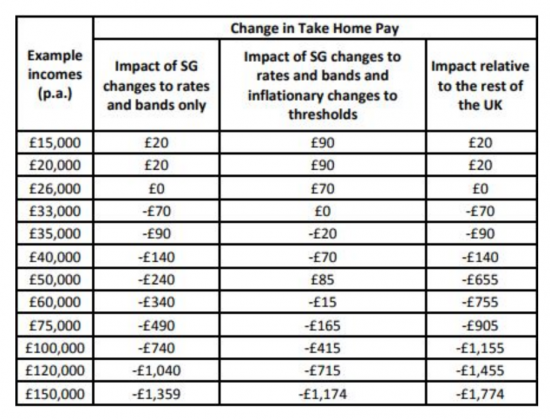 I must be honest and say I have not read all the detail as yet: other work and blogs have prevented that, but I think the proposals demand somewhat more analysis than the FT offered, which was to obsess about some potentially losing out on £30 of tax relief on pension contributions.

So, let's start with the good news. This comes in three parts.

First, Scotland has broken with the rest of the UK. It had to.

Second, it's made the tax system more progressive. Scotland demanded that. It's appropriate.

Third, the money will fund necessary public services and pay rises: both are welcome.

First, the cuts at lower rate are small, but I accept these things take time.

Second, the pension commentary shows the fiasco of not offering full devolution to Scotland on tax: that is the real problem this highlights. The FT got it wrong not to say so.

Third, is that Scotland does not need a tax rise. Its economy is slow. True, some redistribution may help address this, but its modest, and will not change growth as much as might be desired.

So what should have happened? Well, read my White Paper is the obvious first suggestion: these were baby steps taken yesterday in the right direction.

Then realise that Scotland is, because it cannot create its own money, simply a glorified local council bound to balance its books and as a result wholly unable to create the fiscal stimulus that the country really so badly needs.

And in that case appreciate that any government in Scotland has to demand more powers if it is to have any chance of addressing the problems the country faces.

The SNP took a necessary step yesterday and the messaging was correct. But it has to be a lot more courageous to deliver growth for Scotland as well. That's my message. And to those from other parties who might criticise my message is as simple: you would face exactly the same challenge if in office.