‘A Scottish tax system: imagining the future’ : my White Paper for Common Weal

This article, or one very like it, appeared in The National newspaper in Scotland this morning:

I have worked on the role of tax in society for the last fifteen years. What has motivated my work on tax justice has been my belief that there is nothing that can better shape a society for the benefit of the people in a country than its tax system. This is why I accepted Common Weal's invitation to write a paper in their White Paper series on the tax system I think Scotland might need if it is to succeed as an independent state. Much of what I suggest might also be relevant under devolution. 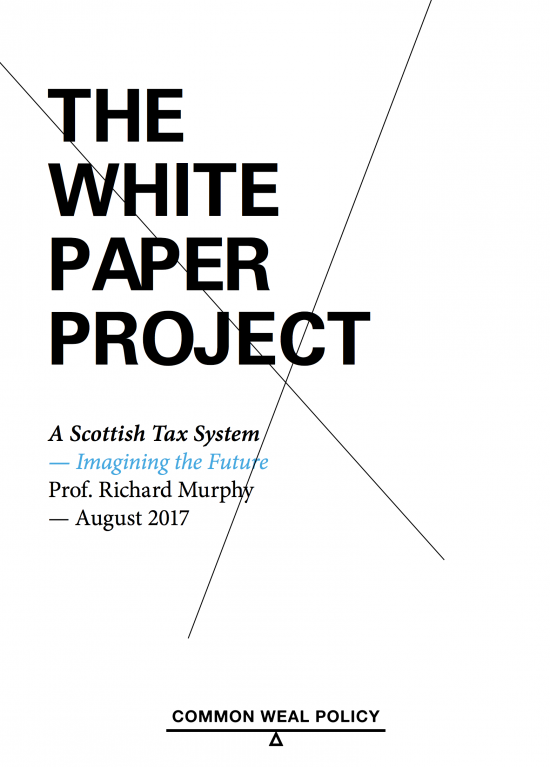 Most importantly, I make the point in the White Paper that tax is not some technical issue to be left to the geeks in either the accounting or political worlds. Of course a tax system has to work and that requires some technical boffinry but what the system achieves is so much more important than that and requires widespread discussion.

This is why in my White Paper I suggest that after adopting its own currency, which is vital to the success of any country's tax system, Scotland would need to put in place systems of accountability for tax that are absent in the UK as a whole right now. That would require that it have a minister for tax, a select committee on tax in the parliament and what I call an Office for Tax Responsibility. This new office, which would be independent of Revenue Scotland, would report to the Parliament’s tax committee on three vital issues. The first would be the effectiveness of the tax system. One of the best measures of that would be its crucial ability to beat tax cheats. Second, it would have to regularly appraise the effectiveness of all tax allowances and reliefs. A vast number of these plague the UK tax system at present, many of them wholly unaccountably and often to the main advantage of tax avoiders. Third, it would have to say if a Minister’s stated tax objectives have worked, or not. If Scotland is to succeed as a country it cannot afford the sloppiness of the Westminster approach to tax.

Nor can Scotland afford the cosy relationship that big business and the wealthy have with the tax system across the UK at present. My recommendations reflect that fact. At present UK taxes on high incomes and anything related to wealth are low whilst the vast majority of tax reliefs are intended to make those already well off wealthier by subsidising their savings. That does not reflect the culture of Scotland.  Nor does it reflect Scotland’s need for revenue. In addition, Scotland cannot afford tax giveaways for those who do not need them. Instead the incentives and allowances that it gives should encourage the type of economic activity that will benefit everyone in Scotland.

What might this mean in practice? Scotland should start with a sensible, but higher rate of income tax. Then it would be necessary to close down most tax reliefs given to boost savings. After that it would be appropriate to tax capital gains as income whilst reform of inheritance tax and its replacement by a wealth tax is long overdue and now possible given the cooperation on tax data that’s now beginning with tax havens. VAT would need to stay, but no one can deny that it is regressive and hits those on low pay hard. In that case a new progressive consumption tax that would be charged on flows through bank accounts, and so charge the wealthiest at the highest rates, would be needed to redress the balance. Such a tax might also discourage excessive consumption that field climate change. What is more, if designed properly this tax could even replace national insurance, which is a tax on employment when that is not what Scotland needs.

These suggestions are just hint at the reforms proposed in the White Paper. They are radical, but the fact is that Scotland now shares, and might one day inherit, the failing UK tax system. That system will not meet its needs. If Scotland is to be viable, whether devolved or independent, Scotland needs to work out how to develop its own tax system that meets its own needs. I do not pretend to know all the answers to the questions doing so will pose. But I hope this White Paper begins a useful debate.