Is inequality going up or down?

I have known Max Lawson, head of advocacy and pubic policy at Oxfam for longer than either of us probably care to recall. Most weekends he sends an email to his associates on a topic he thinks of importance. This week it was on the state of inequality. I thought the comments he made were well argued, reasoned, and needed wider consideration, so I asked if I might share his comments here. With his permission I do so:

Is inequality going up or down?

You would think a question like this would be relatively easy to answer, but sadly it is not.  At Oxfam we have identified the growing gap between rich and poor and the impact of high inequality as a serious crisis. But how serious is it really?

The first thing to say is that the data is not good, but that we do know that the problem is strongly biased in one direction- inequality is systematically underestimated.  We also know the data for developing countries is much worse than that for rich nations. The main method used is to calculate a countries’ Gini coefficient (a number between 0 and 1, where 1 is perfect inequality and 0 is perfect equality).  The Gini has been criticised, and other measures like the Palma which look at ratio between the top 10% and the bottom 40% are favoured by many.  Nevertheless, it remains the most widely accepted measure.

The Gini is calculated using household surveys or census data.  This data has been shown to systematically underestimate the incomes of the richest part of society. For example, a study of several Latin American countries found that the richest survey respondent had a salary lower than that of a manager in a typical medium to large scale firm.  The super-rich do not fill out surveys, and when they do they rarely reveal the true scale of their income.

Various methods are being pioneered to recalculate top incomes, to complement the surveys, most famously the use of tax records by Anthony Atkinson and Thomas Piketty and a group of economists behind the World Incomes Database.   Another way is supplementing national accounts data for survey data.  These methods, whilst themselves far from perfect, demonstrate in every country that inequality is worse than previously thought.  They also have an impact on trends.  Using top incomes, Brazil has not reduced inequality whereas it has if we look at the Gini. 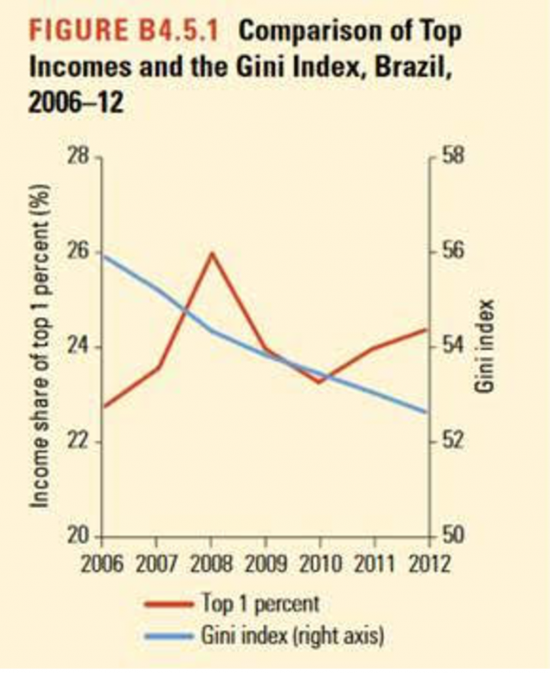 The thing that is measured most commonly is income inequality, the gap in the incomes between the richest and the poorest.

The good news is that global income inequality is very likely to be falling.  If everyone on earth were the citizen of one country, then the gap between the richest and the poorest has reduced.  Christoph Lakner and Branko Milanovic have pioneered work in this area, and Branko wrote an excellent blog on this this week.  This is the result of growing incomes in the developing world, and particularly in China. It remains extremely high however.  If the world were a country, it would have inequality levels around about the same as South Africa, one of the most unequal countries in the world. 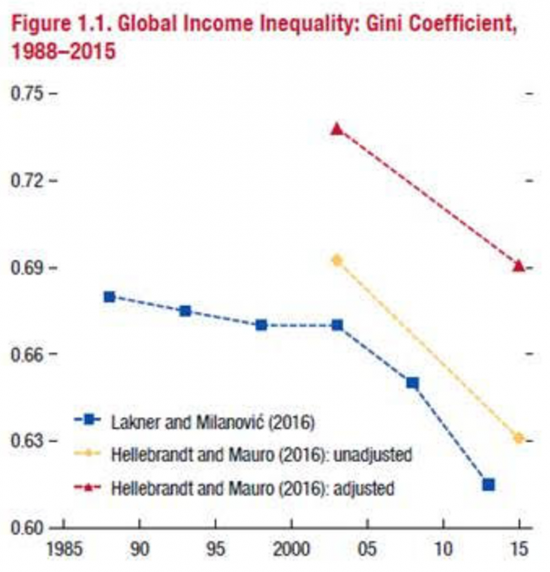 Arguably what matters to most though is the  income gap between rich and poor in their country.  So what has been happening here?

Using the best data available, the IMF in their excellent Fiscal Monitor released last week, try to look at how income inequality has increased or decreased in as many countries as possible- 94.  They conclude that inequality has increased in the majority of the 94 countries they were able to look at over the last thirty years, but only just- 53%. 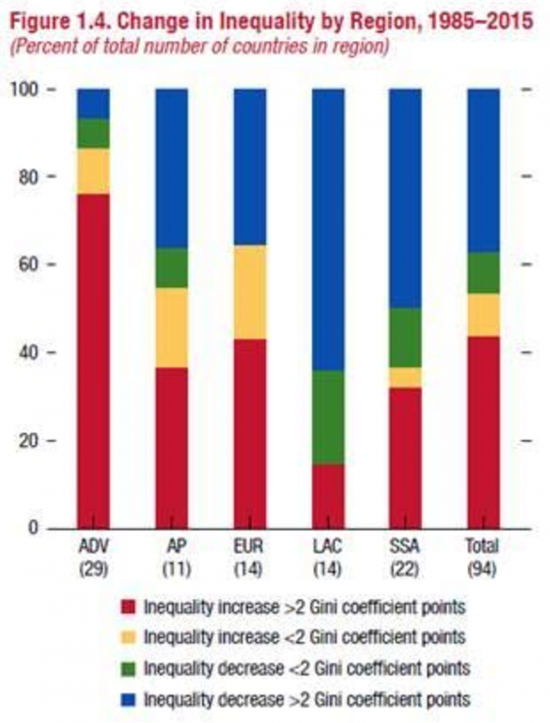 The regional variation is interesting. In Latin America, it has risen fast for the first twenty years, and then fell in many countries for the last ten with strong steps taken by governments to reduce inequality.  In Asia it is the reverse, with equitable growth nearer the start of this period changing into a big increase in inequality in recent years.  In most rich countries inequality has risen quite sharply, but not all and at different times during those thirty years. In sub-Saharan Africa, the picture is mixed.  For the Middle East and North Africa, the data is simply not available.

The countries that have seen rises in inequality include China and India, and some of the other countries with the biggest populations.  This means that seven out of ten human beings live in a country where inequality has risen in the last thirty years.  China’s inequality has reduced slightly in recent years, but remains almost twice as high as it was thirty years ago.

The IMF conclusions, which are similar to the World Bank’s last year, are important.  They reflect a lot of what we know already about the great efforts made in Latin America to reduce inequality, through more progressive taxation and more progressive spending.  These efforts are now being threatened by a wave of new right wing governments that are opposed this action.

They also show that the picture is mixed in other parts of the world too, and this is also reflected in our Commitment to Reducing Inequality index, which highlights those countries in other regions, like Namibia, that have made strong efforts to reduce inequality.  These good news stories are important, as we need to learn from them and use them to pressure the many governments that are doing the wrong thing.

Taxing and spending is not the full story though- other countries like Cambodia have seen significant decreases in inequality because the pro-poor nature of their growth, rather than any significant active intervention by government using tax or spending.  This shows the crucial importance of growth that creates good jobs for those at the bottom of society.

They also show the paucity of data.  In the IMF work, comparisons are only possible for 94 countries.  Less than half of sub-Saharan African countries are covered, and only 11 countries in Asia and the Pacific.

There is also another crucial distinction in how income Gini coefficients are measured.  In Latin America and rich countries, they are based on income, in Africa and Asia on consumption (as a proxy for income) .  Consumption Gini coefficients are much lower. So comparing Africa and Asia with Latin America is to confuse apples with oranges.  This is important, but rarely noticed.  India for example has a consumption Gini (the official one) which is similar to Ireland’s. Its income Gini is much higher, similar instead to Brazils.   Whilst this does not affect the observation of trends over time in these countries or these regions, it does make global comparisons rather specious.

The other major measure of the gap between rich and poor is wealth, rather than income.  Here the data is even worse.  But again we know with some certainty that wealth inequality is systematically higher than income inequality.

Wealth inequality is very important because it is wealth that links most closely to political power and influence, not income.  Today’s income inequality also becomes tomorrows wealth inequality, as the value of wealth rises more rapidly than incomes.  This is compounded by inheritance.

The best data on global wealth trends is the work by Credit Suisse in their annual report. It is this data that we use to produce our eye-catching statistics ahead of Davos each year.  Data on the wealth of those at the bottom of society is not available for many countries to a decent standard, including most developing countries.

In terms of trends- it is clear from what we know that wealth inequality has risen considerably in recent decades in many countries.  The wealth in the hands of the top 10% in China is now similar to that observed in the US.   We also know that the wealth of the top 1% has increased, and is now higher than the whole of the bottom 99% of humanity.

We are hoping this year with the Credit Suisse report that there will be more opportunity to look at trends in wealth accumulation globally over time too.

We also know from other IMF work, that a Gini coefficient above 0.27 has been found to be harmful to growth.  Only 11 countries in the world have inequality this low, and a number of developing countries have inequality almost twice that level.

We also know that high levels of income and wealth inequality have been linked to a large range of negative social and political outcomes.  They also make it much harder to reduce poverty, as the majority of income growth is captured by those at the top.

There is one final measure that deserves mention.  All these other measures are relative- they measure the percentage increase for different groups in the population.  So if I am poor and I get a 10% increase and the rich get a 10% increase, then relative inequality remains the same.

Oxfam has shown previously that whilst the relative/ percentage income increase for those towards the bottom and middle of the global income distribution compared well over the last thirty years with the percentage increase of those at the top (represented in the famous ‘Elephant Graph’ where the back of the elephant is the growth in the incomes of the relatively poor in the last thirty years, and the trunk the growth in the incomes of the richest,) the absolute increases are almost entirely captured by the ‘trunk’, and the back of the elephant disappears. 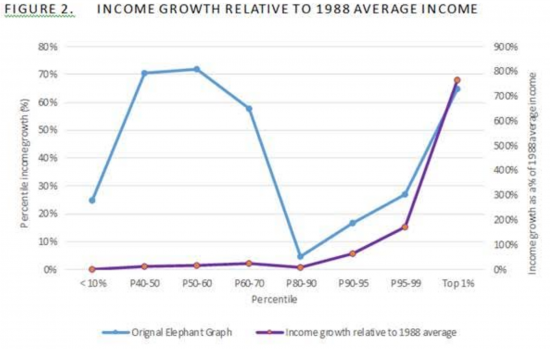 So what can we conclude from this?