The Conservatives have out-borrowed Labour for a century

I noticed that the Office for Budget Responsibility published government borrowing data for 100 years (actual and forecast) when producing its report on the last Autumn Statement. I promised myself I would take a look at this sometime, and that time has arrived. This is what a chart looks like: 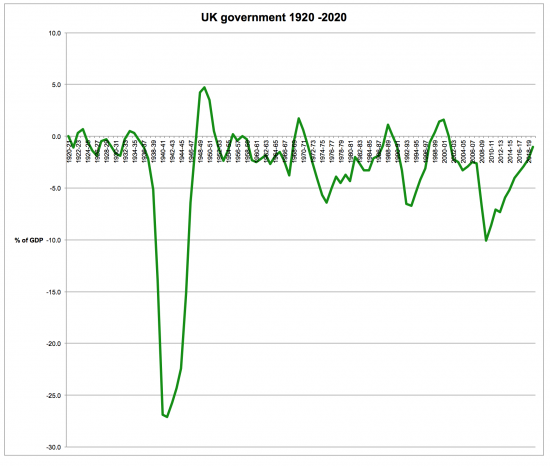 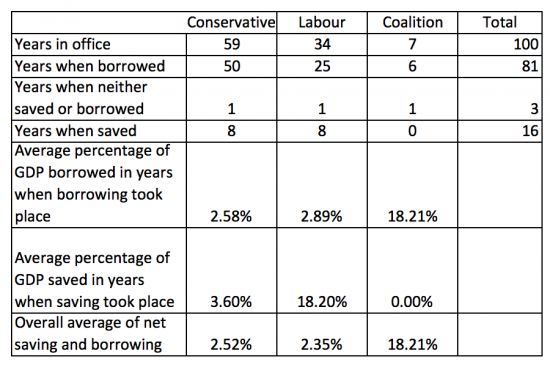 The Conservatives have very obviously held power more often than Labour. But the balance of both is sufficient for trends to be valid. As the data is all expressed as percentages of GDP inflation is not an issue. A number of trends emerge.

FThird, Labour and Conservatives both saved in the same number of years, but since Labour were in office much less they were much more inclined to do so. They borrowed in only 73.5% of their years in office: the Tories did in 84.7% of their years.

Labour did borrow more on average. The difference is small though and neither borrowed anything like as much as wartime coalitions did.

The biggest difference is that when Labour saved it really saved: the Conservatives did so only marginally.

The result is that netting all data out the Conservatives on average borrowed more than Labour.

But, when I last undertook such an exercise I was accused of building in bias: it was said that Conservatives had to borrow to deal with the mess that Labour had left them. So I time lagged the data: for the first two years after a government left office I assume its policies had greatest impact on the economy. Only after two years was the incoming government really responsible for levels of borrowing.  Doing this the following table emerged: 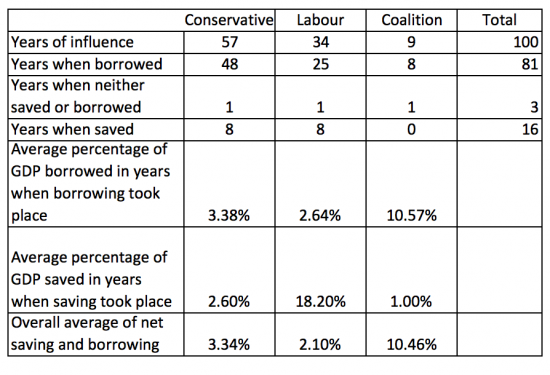 The number of coalition years now goes up because of the impact of the 1920s coalition on the opening data and two years of Tory influence fall out at the end. The number of Labour years of influence stays the same.

What is clear though is that Conservative borrowing rates go up (this is mainly because part of the war years now fall to them) and so the disparity between the parties increases. Most tellingly though it is Labour's borrowing rate that falls and since this is not largely because of wartime impact the evidence is that they suffer from inheriting Conservative positions and not vice versa.

I concluded from past research that the Conservatives were the biggest government borrowers over a period of 70 years. Extending the data to 100 years confirms the conclusion. If a debt narrative has any significance (and I question that) then it is the Conservatives who have the questions to answer on the UK.