Having produced information on government borrowings and repayments over a seventy year period, and in the process shown that curtailing the analysis after 62 years would not change the outcome, I have been challenged to produce further variations.

One, oddly demanded only by those of a right wing persuasion it seems, wanted the first eight years of data lopped off  to match my ignoring the last eight. Those making the request seemed to think that the economic environment of the immediate postwar period might have given a result biased to Labour. I have to say I think that absurd: the contention is that Labour was as unable to manage this post-war environment in a way that it is suggested (by implication) that George Osborne has been unable to manage the last few. When the Attlee government transformed the economic environment forever in this short period the hollowness of that suggestion will be noted.

So, dismissing this idea as nonsense, let me instead do another variation instead, which is for the period from 1979 to date,  which we can truly call the UK's neoliberal era. For this period the data is as follows: 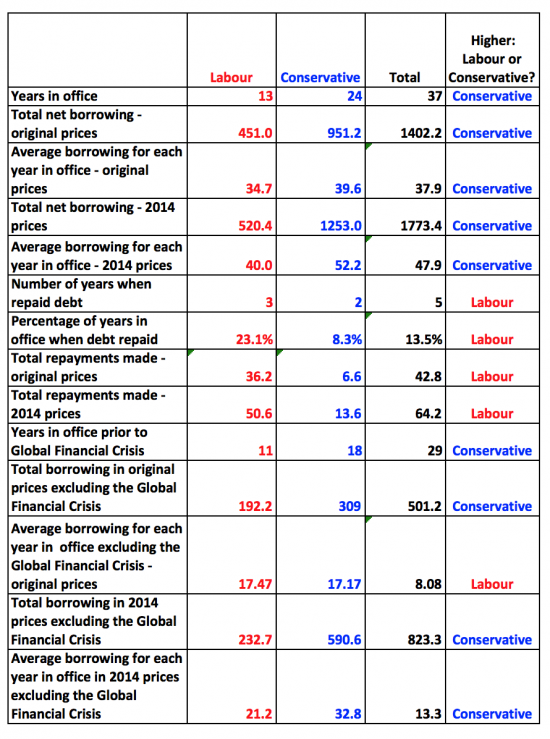 The result changes slightly from that given by the 70 year data. Now the number of years in which tax repayments took place were the same, but Labour repaid much more. And it is true that in originally priced pre Global Financial Crisis data that Labour did, just about, borrow more on average than the Conservatives, but as soon as inflation is taken into account this was very obviously not the case.

So the result is that Labour were still more prudent in their borrowing and also repaid more debt than the Conservatives when only the period since 1979 is considered.

I really do think the hypothesis that Labour are more prudent and more likely to repay debt than the Conservatives can be considered proven.