The Adam Smith Institute published a blog last night that was headed:

The blog feels as if it is the work of Tim Worstall, whose obsession with my work does not suggest objectivity on his part, as others have noted.

The blog concludes that having read my discussion on Oxfam's tax arrangements:

We really must thank Richard Murphy. Because we've now got a strict measure of what tax avoidance is, one we can all agree upon. If HMRC looks at it and says that's fine then that is fine. It is not avoidance.

And so thanks to Richard Murphy. There's pretty much no tax avoidance going on, only some criminal amount of tax evasion and the vast majority of the economy is entirely tax compliant. And, of course, if we cannot believe the noted tax campaigner, inventor of country by country reporting and the Professor of Practice in International Political Economy at City University on such a point then who can we believe?

Well, you certainly can believe me. But let's be clear as to why. Let me do the comparison of Oxfam and Amazon, which is a test the ASI used. It looks like this: 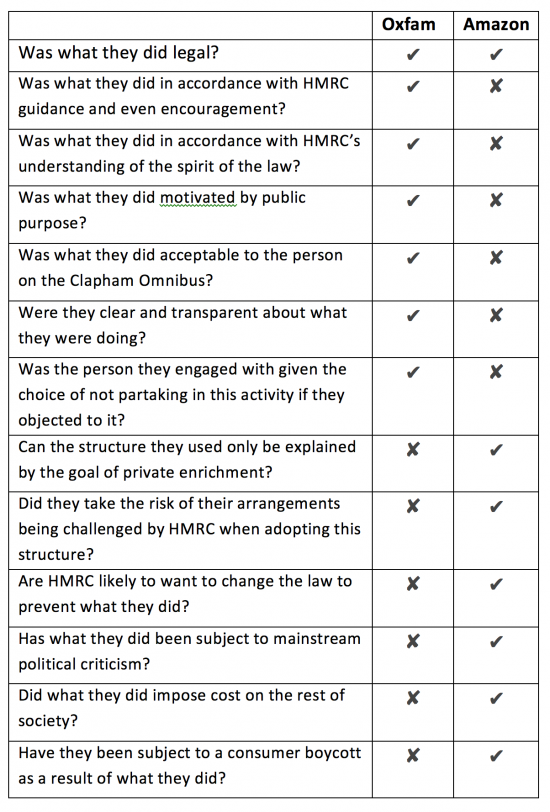 So we agree on one thing: what Amazon did was legal.

Thereafter we agree on nothing, and I think I present the truth fairly and accurately. There is no common ground between Oxfam and Amazon (et al) at all. Oxfam worked within the framework of public policy: Amazon worked against it, and the evidence that both statements are true is compelling.

So, yes, the ASI do owe me an apology. They could start with apologising for wholly misrepresenting the truth on this issue, for a start. 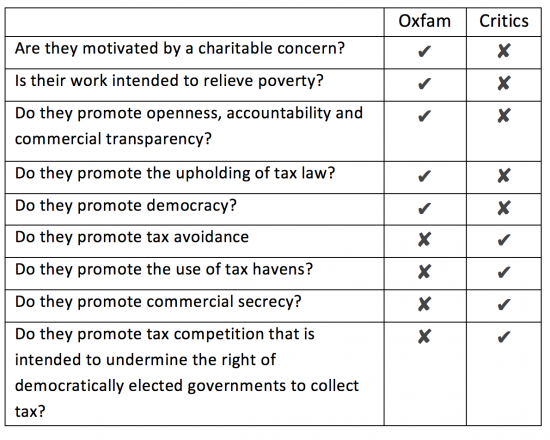 I rest my case.

I am well aware that there are those, no doubt Worstall acolytes, who say that my support for Oxfam will come back to haunt me. I don't think so. The case I have made is clear, unambiguous and has the advantage of being accurate, honest and right.

Tax avoidance is about the intention of complying with the letter and spirit of the law which Oxfam have very clearly done with quite explicit HMRC approval of the arrangements they use.

When the ASI can offer me similar HMRC suggestion that an entity should adopt the structure used by Amazon and others then they may have a case. They cannot, I know, and for good reason. Those arrangements are intended to exploit the law contrary to the will of parliament. They are legal, but that is not contested when it comes to avoidance. It is the intention to take tax risk to reduce a tax bill contrary to public purpose that matters when identifying tax avoidance and, as I have shown, using this appropriate criteria Oxfam have no case to answer: they have acted wholly within the spirit of the law and the likes of Amazon very clearly did not.