I think Lin Homer, George Osborne and David Gauke owe me an apology

The budget announced a might big crack down on big corporate tax avoidance in the UK. And quite a lot of other tax avoidance too, come to that. Don't get me wrong: I welcome such crack downs: I campaign for them after, so credit where credit is due: the government has made the right moves.

But, there's a little more to it than that. Let me explain. This comes from the HMRC 2015 publication on the size of the UK tax gap. The tax gap is the difference between the money HMRC should get in tax if the system worked as they expected and what they actually receive. They split the figure down by tax and by type of abuse as follows: 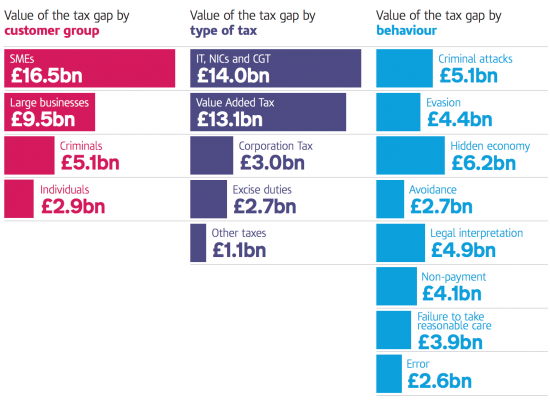 Note that for all companies - and 1.5 million or more submit tax returns - the total loss including to evasion was supposed to be £3 billion.

And total avoidance was just £2.7 billion.

Now note that according to the budget it is planned that £12 billion be raised from tackling avoidance and evasion (page 57 here). So I looked at what makes this up. It is as follows: 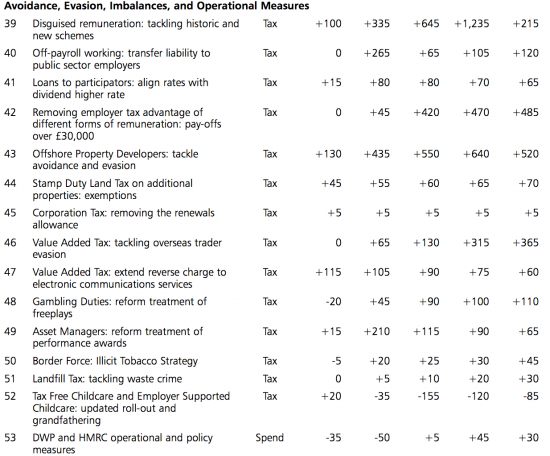 Now there's a problem with that lot: they only add up to about £9.4 billion in my estimate.

So where's the rest? Try this table too - almost all of which were described as measures to tackle avoidance by big business by the Chancellor:

They come to over £5.6 billion: we've now well overshot the £12 billion mark. As with everything else in this budget, someone can't add up, but what we know for sure is that all these figures are required to make the target totals.

Corporation tax avoidance measures in that year will raise at least £1,535 million from the second table and £550 from offshore from the top table. That's £2,085 million in all. Staggeringly, that's supposedly two thirds of all recent losses for this tax - and since all the items in question are exclusively for large companies that leaves all the rest evading and avoiding less than £1 billion between them for all known reasons. Let me suggest to you that this is nigh on implausible: for a start in 2018-19 the above measures also raise £65 million from tackling avoidance by using personal service companies and £645 million from tackling disguised remuneration. It's as if when these changes are made almost every company will be paying the right amount of tax in the UK, and let me assure you, they won't.

Put all this together in another way and it then also seems that the claim is made that something like £2.5 billion of tax avoidance is going to be stopped. But the current best estimate is there is only £2.7 billion a year. Something does not add up here either, and it is that, as I have always suggested, HMRC's estimate of avoidance are far too low.

In my last tax gap estimate I estimated UK tax avoidance at £19.1 billion a year. I did, of course, give my reasons. And whenever estimates such as those noted above come out they just show how embarrassing the estimates made by HMRC are. You can't, as they do, both claim avoidance is very small and then announce measures to tackle it that supposedly close down almost the entire tax avoidance activity of the UK overnight when there is not a person who thinks that will happen.

HMRC need to be honest about the tax gap. They aren't. And so they keep producing these absurd statistics which only make sense in the context of the data that I have produced - which also shows that the moves announced are good news but that there is still a long way to go. That is what they should be saying, and at the same time a small note of apology to me for the years in which they have said I am wrong when doing so has so obviously been propaganda and not fact would not go amiss.