I am pleased to share the following press release that has been issued by the office of Caroline Flint MP, Labour MP for the Don Valley and in doing so make clear that I support the entire purpose of her Bill:

A senior MP and Public Accounts Committee member, Caroline Flint, has written to the Chancellor ahead of the Budget to seek his support to tackle corporate financial transparency in the wake of the Google fiasco.

The Government is legislating to require multinationals to report their tax, revenues, profits and assets to HMRC, as part of an international effort by the G20 and OECD countries to stop profit shifting.  The MP is seeking to go a step further to ensure this information is published.

The MP welcomed measures for disclosure of financial data to HMRC, which were included in the 2015 Financial Act which the Government has been consulting on.  Ms Flint describes the tax avoidance problem as “unfinished business” and urges the Chancellor to back this extra step, which will be presented in a Bill to the Commons the day before his Budget.

Ms Flint says the Chancellor has already expressed support for the principle in her Bill.  Speaking to Finance Ministers in February, the Chancellor said: “I think we should be moving to more public country-by-country reporting. This is something which the U.K. will seek to promote internationally.”

In her letter, the MP says: “In the Finance Act 2015, you provided for the UK to implement the first country by country reporting, in accordance with the OECD template, a significant step towards tackling this huge problem…  The measures for financial reporting that the Treasury is consulting on are welcome but, as you acknowledged, we need to go a step further.”

The MP argues that openness is key to changing behaviour among these companies. “Only by making these companies become more open will we restore public faith that they are paying fair taxes.  The only winners from secrecy are multinationals that shift profits to low tax dominions.  The winners from public reporting are the Government, HMRC, those businesses and taxpayers who already pay fair taxes and developing countries who are being short changed.  Ultimately, the best way for these multinationals to restore their reputations is to come clean and be seen to do the right thing.”

The MP has received cross party support for her Ten Minute Rule Bill, the Multinational Enterprises (Financial Transparency) Bill which is tabled the day before the Budget.  The MP is hoping the Government will incorporate the measures in their plans but will move amendments to the Finance Bill if they don’t.

To date, ten members of the powerful Commons Public Accounts Committee are supporting the Bill.

The Bill also has the backing of business and tax groups Fair Tax Mark and Tax Justice Network, as well as aid organisations including Oxfam, ActionAid, CAFOD and Christian Aid.

I should disclose that I offered advice to Caroline's team on this Bill and am a director of the Fair Tax Mark. 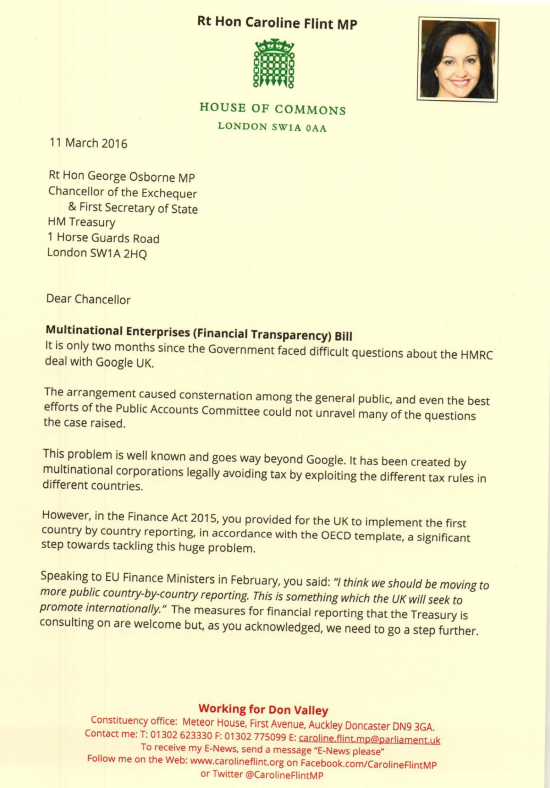 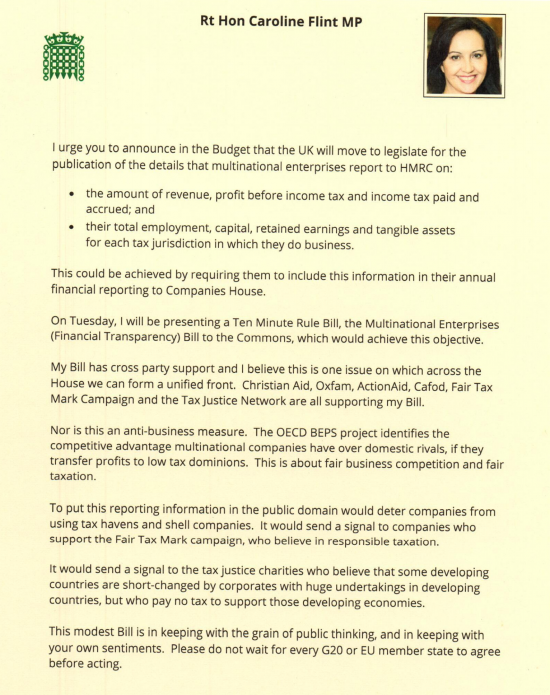 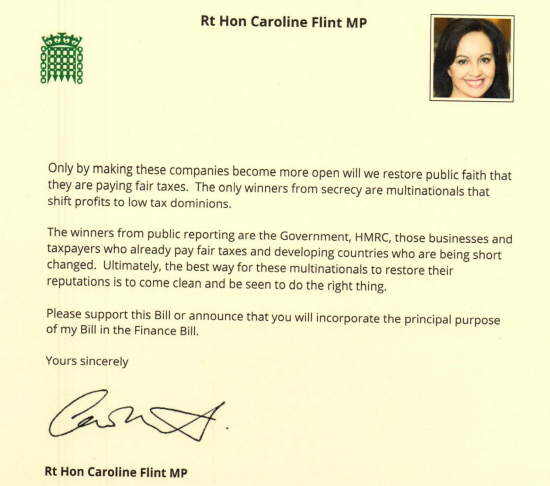 I agree with that last sentiment, very strongly.

Ten Minute Bills almost never become law, but this one makes a very powerful point and I am pleased to support it and thank Caroline Flint for making this her issue of choice.