Whether we still need cash is a vexed question: as yet I have little doubt that we do for transactional purposes.

But when I say transactional purposes I mean those undertaken in the normal course of meeting legitimate human need. And there is not a shadow of a doubt that vast amounts of cash is not used for this purpose. I mentioned this theme recently. Now it has come up again in a new paper by Peter Sands, for Harvard Kennedy Business School, the abstract of which is as follows:

Making it Harder for the Bad Guys: The Case for Eliminating High Denomination Notes

Illegal money flows pose a massive challenge to all societies, rich and poor. Tax evasion undercuts the financing of public services and distorts the economy. Financial crime fuels and facilitates criminal activities from drug trafficking and human smuggling to theft and fraud. Corruption corrodes public institutions and warps decision-making. Terrorist finance sustains organisations that spread death and fear. The scale of such illicit money flows is staggering. Depending on the country, tax evasion robs the public sector of anywhere between 6% and 70% of what tax authorities estimate they should be collecting. Global financial crime flows are estimated to amount to over US$2tr per year. Corruption amounts to another US$1tr. Most of the effort to combat such illicit financial flows focuses on the perpetrators, the underlying criminal activities or on detecting illicit transactions through the banking system. Yet despite huge investments in transaction surveillance systems, intelligence and interdiction, less than 1% of illicit financial flows are seized. In this paper we suggest a different approach, one that would complement existing policies and make them more effective. Our proposal is to eliminate high denomination, high value currency notes, such as the â‚¬500 note, the $100 bill, the CHF1,000 note and the £50 note. Such notes are the preferred payment mechanism of those pursuing illicit activities, given the anonymity and lack of transaction record they offer, and the relative ease with which they can be transported and moved. By eliminating high denomination, high value notes we would make life harder for those pursuing tax evasion, financial crime, terrorist finance and corruption. Without being able to use high denomination notes, those engaged in illicit activities — the “bad guys” of our title — would face higher costs and greater risks of detection. Eliminating high denomination notes would disrupt their “business models”.

Peter Sands is, of course, the former chief executive of UK-based Standard Chartered bank and it would be easy to argue that this paper is a statement of what some might cal the bleeding obvious. The paper is, however, useful in bringing inter-disciplinary themes like tax, money laundering, drug related crime and the shadow economy together. It also adds some research. This table is telling: 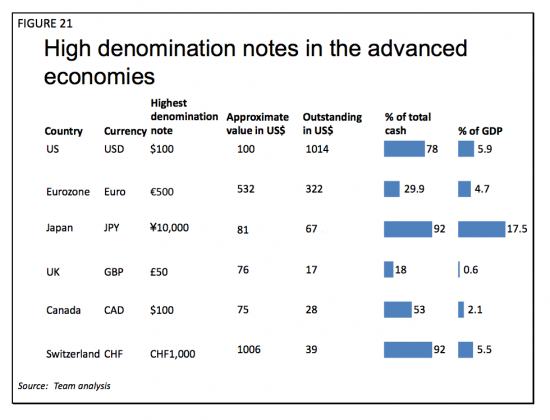