Would those commenting on tax please engage their brains first?

A rush of really quite stupid (I use the word advisedly) comments on tax reform are hitting the press in the wake of the Google tax story. Take the suggestion from Jonathan Ford, an FT writer, in that paper this morning. He says:

There is ... one simple measure that might allow the UK to do more than get mad at Google — and actually get even. It wouldn’t require a wholesale revision of the existing system. It involves reviving (in a reformed guise) a levy abolished in 1999: Advance Corporation Tax (ACT).

As he notes, this charge was effectively a tax withholding an the payment of a dividend. It made a lot of sense. I regret its passing. And Jonathan Ford claims it can be revived, with a twist:

The new Advance Corporation Sales Tax (ACST) would be based on a similar principle. Set at a percentage of a company’s UK sales, the levy would be offset against its corporation tax payments. ACST could be set at varying levels for different sectors, based on their profitability, and targeted at those — such as web services and retail — that are prone to abuse.

And as he explains:

To see how it would work, take a company like Google, with £4.3bn of UK sales in 2014. Apply ACST at the rate of, say, 4 per cent and it would have to pay £173m. Now if Google declared profits in Britain in line with its 26 per cent global margin, that would give it £1.1bn on which it would pay corporation tax of roughly £220m — more than enough to offset the ACST it had already paid. But if it continued to do what it currently does, squirrelling away profits overseas and stumping up just £30m of corporation tax, £143m of that ACST bill would be unrelieved.

But note he wants this tax to apply to retail. This is Tescos income statement: 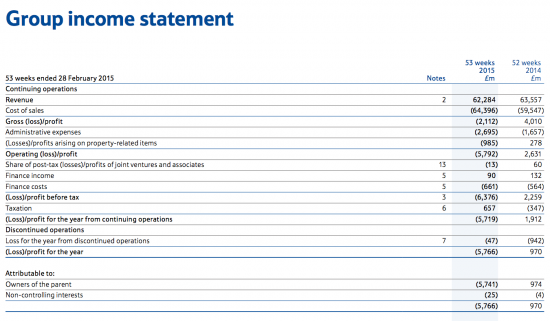 So Google has to pay a 4% margin and Tesco, well, somewhat less.

And what would the right margin be in 2015 when Tesco made a loss? Are we really saying that it should still pay tax? Does anyone really feel completely comfortable with that? I have argued about limiting the use of losses, but asking for tax when a loss is paid is something else, and could tip some businesses in trouble over the edge, unnecessarily.

So let's be clear, what is being proposed is an arbitrary tax to be charged at rates set at will and clearly open to dispute whether or not tax might eventually be due at potential prejudice to the survival of some companies.

I think the description 'stupid' might well apply to that.