I have been commenting on HMRC's plans to make all tax services digital. I do not believe this will (and maybe even can) work. Let me offer an example as to why not. This is a personal tax statement sent to a person recently: 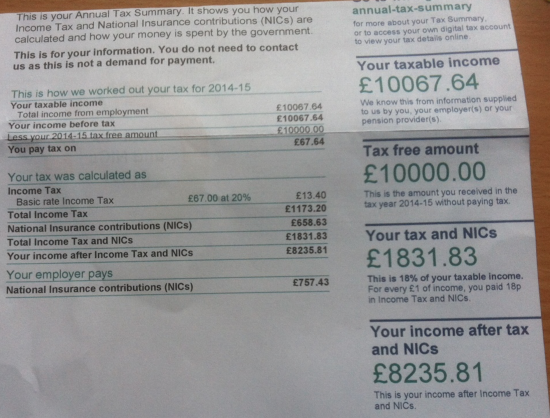 However it is looked at this statement is wrong. There is clear implication in it that the recipient really does owe £1,173.20 of tax on taxable income of £67.64.

And the NIC calculations are bizarre: the recipient of the statement was a not a company director and as such there is no way I can even get close to working out how the supposed liabilities could have arisen.

But instead of HMRC contacting this person to work out what is going on, or sorting it out for them, or sending them a cheque, they do instead send a statement confidently telling them they have paid £1,831.83 when the real liability was vastly lower than that.

So let me draw some inferences. The first is that I learned, long ago, that nothing could be 'digitised' unless it already worked well. If any form of computerisation is tried on a system that does not already work then even more confusion follows. A system that can send the above statement is not working well.

Second, this says existing systems have no checks and balances built into them: the simplest of algorithmic checks should have flagged the above statement up as looking as if it was wrong and suggested it should have been checked before being sent out.

Third, if such things happen now then there is no guarantee they won't in the future but the staff to put things right will have been reduced by then and the attitude will be 'the computer is right' because that is what top management will say as a mantra.

Last, what this implies is that HMRC have got all their priorities wrong. Nobody needs a digital tax service right now. They do want to stop tax cheating, but as I have explained, this process won't do that. But what they really want is HMRC to work. For once I agree with the Mail who said yesterday:

All most people want is a tax service that deals with the most rudimentary problems swiftly and picks up the phone within, say, five minutes when you call.

That should be the aim.

When that can be done there may be a chance to think digital.

Right now there's just a disaster in the making developing at HMRC. And we will all pay for it.