HMRC has issued its new tax gap data this morning. 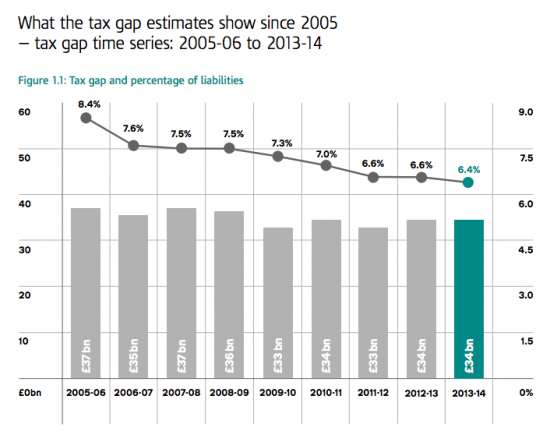 I haven't the time, or even much inclination, to point out yet again how farcical this figure is but let me instead restate the obvious problem with this data.

In their latest report on the scale of cash usage in the UK economy the Bank of England accepted that the UK shadow economy might represent 10.3% of all UK economic activity.  They have also noted that this is low by international standards. The shadow economy only represents activity that is not recorded to prevent tax being paid. It does not include tax avoidance or bad debt. and nor does it include evasion on sums not contributing to GDP like capital transactions.

The rate is unsurprising: as I have noted the figure is consistent with the UK VAT gap when averaged with the EU version for the same figure. The VAT gap is the one reasonably reliable macroeconomic element of the UK tax gap estimate from HMRC at present and is currently stated to be 11.1% of the total tax due. This is the only 'top down' measure in the UK tax gap and is, it should be recalled, a measure of unrecorded income. So it accords very closely with the estimate of the UK shadow economy.

When I made enquiry of the Office for National Statistics a couple of years ago on the extent of the shadow economy included in UK official GDP I was advised it was at most 1%.  This may have increased slightly since then because of the inclusion of prostitution and one or two other items in GDP  but the implication of  the Bank of England’s position and this advice from the ONS is that at least 9%  of gross UK economic activity is not reflected in GDP data. HMRC say something very different though. They say total evasion (and if I am generous we can include their data fro the hidden economy and evasion in this sum) was £10.6 billion. Note that this is only the illicit element: that part that relates to criminality is on top of this sum according to the BoE. HMRC's own new break down of the tax gap is as follows:

Now compare this data with some macroeconomic facts. The first is that UK GDP in 2014 was £1,705 billion. This implies unrecorded economic  activity of at least £168 billion in 2013/14, the year to which the new HMRC data relates.

Criminal attacks are in addition to the 10.3% the BoE describes as the shadow economy.

Bad debt is an unrelated issue as is avoidance and legal interpretation.

I would suggest that failure to take reasonable care and error also fall into the category of systems errors and not the shadow economy.

So, as noted, this leaves just £10.6 billion of tax lost to the shadow economy by this definition.

If, generously, I add back in the systems errors but not the criminal attacks that tax rate on the shadow economy that the BoE recognise to exist increases to 10.2%.

I have argued that in practice the tax rate in the shadow economy may well be higher than in the mainstream economy because much of it is top sliced i.e. allowances and reliefs are already claimed. I will ignore that argument here, but I can see no reason at all why the overall rate of tax in the shadow economy as a part of GDP should be less than that for the economy as a whole. If it was, why would people evade?

On top of this there is then, I think, tax due as a result of error and not taking care of £6.5 billion. This does not come from the shadow economy, but is mistakes in the recorded economy.

And tax evasion on activity that does not make up part of GDP i.e. CGT and inheritance tax, which I estimate at £10.4 billion must then be added.

Then there are criminal attacks. Based on official fraud data I make this higher than HMRC at £6.5 billion.

And offshore is not, of course, in GDP so that £4.3 billion needs to be added in for that as well.

Then there may be £19 billion of avoidance in my estimate.

Lets ignore dent for now, although I think it substantially greater than the figure HMRC suggest because they do not pursue a great deal of i, and so ignore that it is irrecoverable.

That then leaves us with a core question that has to be answered and that is given that the BoE now accepts that there is a shadow economy exceeding 10% in the UK, and that it is undertaken to evade tax obligations, how come the tax lost on that unrecorded income is, if HMRC are right, due at only 6.3% when the reality is that tax on GDP as a whole exceeds 35%?

The claim that tax evasion is as low as HMRC say it is only makes sense if:

a) the shadow economy is kess than 3% of GDP — which is beyond the bounds of possibility in known macro data by some considerable way, or

b) much of the activity in the shadow economy is exempt from tax — which would make not declaring it pointless.

Until anyone can explain this HMRC claim then the data published by HMRC today simply looks incredible (in the literal sense of the word) whilst my own data on the tax gap looks right, whatever naysayers suggest. With the BoE on my side the doubters now have to prove their case, I suggest. As does HMRC.