What’s wrong with Facebook UK’s accounts and what reforms are now needed?

I had a piece on Comment is Free on the scandal surrounding Facebook's tax payments. Except that I say I have no idea if there is any such scandal. That's because, as I argue in the piece, Facebook UK Limited's accounts provide no clue as to whether that is the case, or not. To put it another way, they are so far from providing what I consider to be a really true and fair view of what Facebook has been doing in the UK that I cannot tell what is going on.

Let me stress straightaway, and not just for legal reasons, that this does not mean that I am saying that there is any wrong doing going on here: there is no evidence that there is. The accounts do, I am sure, comply with the law and, because the world's leading auditors have so managed the setting of auditing standards that a true and fair view by and large means that the right boxes can be ticked with regard to that legal compliance, however, nonsensical the resulting data, then those auditors are also technically off the hook.

But that does not mean that I think that the accounts are true and fair. Let's start with the sales figure. What Facebook UK Limited (which can be called Facebook or Facebook UK for the purposes of this blog) say is that they have made sales of over £104 million in 2014. This is the profit and loss account: 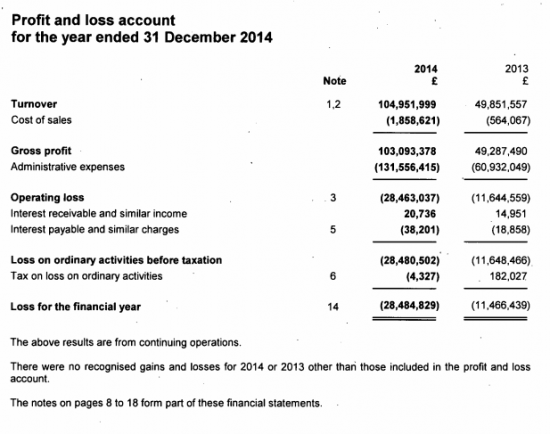 Except we have no idea whether this is true or not, because the accounts say that the reported turnover is:

In other words, Facebook UK is billing some other part of Facebook (the location of which is not disclosed, quite extraordinarily and I do wonder whether in contravention of IFRS 8) for the services supplied and that other entity is, presumably, billing Facebook's UK's customers. So, to put it another way, Facebook offers no account at all of what sales it makes in the UK. The data supplied is based on a contract that they have written internally which may or may not have some bearing to the economic reality of what is really going on in the UK, but we just don't know.

Why don't we know? There are two reasons for that. First, Facebook does not have to publish country-by-country reports for the UK so we have no way of knowing what its real sales are here. And second we don't know what s really happening because Facebook has taken advantage of a legal loophole not to disclose the level of its trading with other Facebook entities. I stress this note is legal:

I also stress that the exemption referred to means that most of the really important data we want to know from these accounts is hidden from view.

What else is wrong with the Facebook accounts? Well, let's take the profit (or rather, loss) figure again (above). Note there is a loss of £28 million. But then take a look at Note 4 which analyses employee costs, which is as follows: 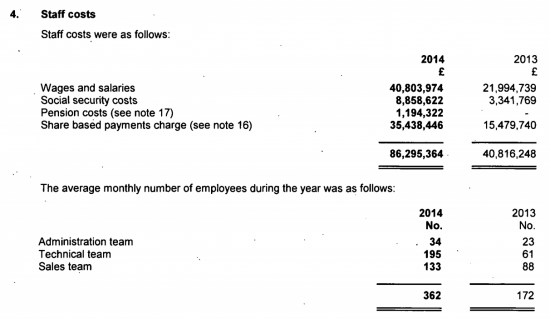 Ignore the fact that average pay is £210,000. Note that £35 million of share based payments. They reappear in note XX to the accounts on reserves, which looks like this:

The loss as per the profit and loss account now has that £35 million added back: it disappears from view as a result. And the result is that the reserves, and so the value of the company went up by £7 million in the year. If you don't believe me look at the shareholders' funds on the balance sheet: 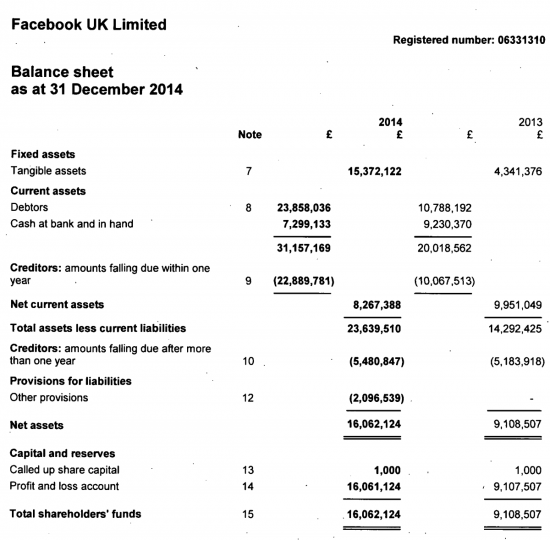 The reserves have in increased by £7 million. That’s the difference between the £28 million reported loss and the £35 million of share-based payments which have now disappeared as apparently the company does not owe them at all. To explain this go to note 14 where it (sort of) becomes clear that these options are issued by the parent company, Facebook Inc, and effectively are at cost to it. So, when it comes to shareholder's funds the cost is not being counted. Or in other words these accounts have two figures for profit (or loss) in them. One is a loss of £28 million. The other is a profit of £7 million. And the auditors sign off both. But which is right? Who knows? 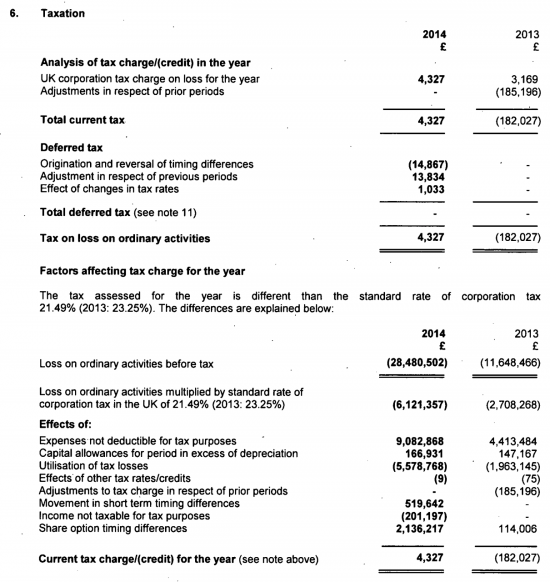 Does that make sense to you? If it does, well done. I've prepared more sets of accounts than most people in my life, and I can make little sense of a lot of that, precisely because Facebook have gone through the process of complying with the letter of the law and yet say almost nothing. I love the adjustment of £9 though: that can apparently be included when adjustments for millions (like the expenses not deductible for tax, which are not just the share payments)  are not explained.

And nor, for the record, do we have any indication of whether any tax was paid, or not. Because of another legal loophole Facebook does not have to publish a cash flow statement in the UK saying whether or not it has actually paid tax. We just don't know.

So, the accounts are, to be polite, nonsense. They probably do not disclose the right level of sales for Facebook in the UK, but only that part that the group has chosen to account for in this country. They do not give a clear indication of costs because not all the cost of the share based payments will be incurred in the UK. They disclose an ambiguous figure for a loss that may be a profit. The tax liability is not adequately explained in my opinion and yet the accounts are, I stress, completely legal and the auditors can properly sign them off.

How did we get to such an absurd position as that? What was it that permitted companies to give us such hard to understand data and get away with it? There are several reasons.

First, the corporate world spends a fortune to make sure things are maintained in this way so that they are as little accountable as possible. How do I know this? I have seen the legions lined up to oppose country-by-country reporting at the OECD, for a start. The cost expended must have been enormous. They won: the OECD's recommendation on country-by-country reporting is that it be reported to tax authorities but strictly off any public record. A lot of money secured that result.

Then we know that the same legions of the world's major corporations and accountants also lined up to oppose changes in the law to require companies to record where they make their sales for tax purposes. Whether the new OECD recommendations on this issue, just published, will really change this and whether those recommendations will be properly implemented are both open to doubt for this reason. Countless sums have already been expended to already undermine the recommendation: no doubt millions more will be spent to prevent implementation.

Second, the capture of the accounting standard-setting process and the auditing standard-setting process by the big firms of accountants so that they, almost alone, determine what shall now be included in a set of accounts and how those accounts shall reported upon by their auditors means that democratic control of both processes has been lost  any and with it  any connection to the public interest. From top to bottom the whole agenda is now set by the Big 4 firms and their clients.

Third, the EU is guilty in  facilitating this loss of control. When it was desperate to find a common standard for European reporting it adopted International Financial Reporting Standards as a de facto European standard when they did not reflect (in my opinion) current European thinking on many issues and when this meant undue influence was ceded to the US accounting firm dominated processes as a result. It has now been shown, quite convincingly, that IFRS does not comply with the UK company law expectation of what a true and fair view is.

And, bluntly, it would seem that successive UK Business Secretaries (and there have been very many of them, a lot lasting little time in post) have more than happily washed their hands of responsibility for accounting disclosure. Political demands have instead been to relax the so called burdens on business, whilst ignoring that accounting is meant to be for the benefit of society. To be candid, there has been a democratic failure here.

So, what can be done? This is an issue that I cannot address in depth in an already long blog. I will do so in more depth over time as this is an issue close to my heart right now. This list will have to do for the moment.

First, we need compulsory country-by-country reporting for all multinational corporations, Facebook included. Yes that will need US cooperation,  but we can set the precedent in the UK.

Second, we need to drop the absurd rules that mean intra-group transactions do not need to be disclosed in accounts such as these. If related party transactions are important (and they are fundamental to a lot of the current problems in tax, in particular) then they have to be disclosed.

Third, there is no excuse for cash flows to not be published in all large company accounts. The exemption has to be removed.

Fourth, the accounting for share based payments is clearly deeply misleading: revision is needed if accounts are to show a true and fair view so that only the actual liabilities to be expensed are included in a P & L account.

Fifth: tax disclosures designed many years ago now are very obviously not meeting stakeholder needs in a new era of interest. More explanation within tax reconciliations is needed. Terms like 'tax disallowable items' are just not good enough to impart useful information. New narrative requirements are essential if tax is to be properly understood.

Sixth, the boundaries between deferred and current taxation need to be more clearly delineated: the transfer of tax losses into account in Facebook UK is an example of where more explanation of this interaction is required.

In summary: the assumption that minimal disclosure is consistent with a true and fair view and that financial statements are only for the use of the providers of capital to a company have to be consigned to history. A new era of accounting disclosure is now needed, and these accounts are the evidence of that. They're legal, but they don't do the job we expect of them, and that's why reform is needed.