Where does Â£5 billion of tax savings from beating avoidance and evasion come from?

This, according to the Office for Budget Responsibility, is where a little over £5 billion of savings from tackling tax avoidance and evasion come from over the next five years: 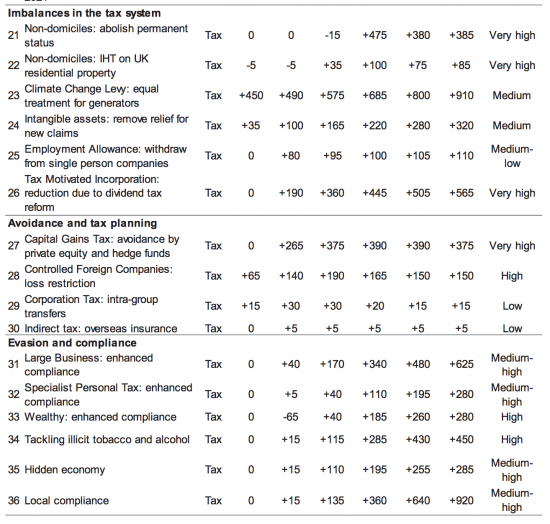 Those risk assessments are interesting: many of the biggest numbers appear to have high levels of risk attached to them. This is unsurprising.  The OBR obviously have doubt that, despite the supposed allocation of new funds to HMRC that it has sufficient resources to do its job, saying:

Our forecast assumes that HMRC’s compliance activities will be sufficient to reduce the implicit ‘tax gap’ between actual receipts and the theoretical amount that would be received if compliance with the tax system was 100 per cent. As explained in Annex A, we have sought assurance from the Treasury that both the baseline compliance activity implicit in our pre-measures forecast and the additional measures that appear on the scorecard will be adequately funded. We will keep this funding and the receipts effect of HMRC compliance activity under review in future forecasts.

It's hardly a ringing vote of confidence. And with good reason. First, the additional local compliance recovery appears to be based on this Budget report forecast:

2.98 Investment in analytical team for illegal working — The government will invest an additional £0.8 million in 2015-16 to create a data analysis resource in HMRC to tackle illegal working and enable closer joint working with other agencies.

Second, the HMRC business plan says it will save £205 million in 2015-16 and the net new investment announced yesterday was £60 million in the same year with £225 million extra the year after. That's called standing still, at best.

The chance that these savings will come from the actions planned looks very low indeed to me. And that's absurd when so much more is on offer in this area, as I have long explained.